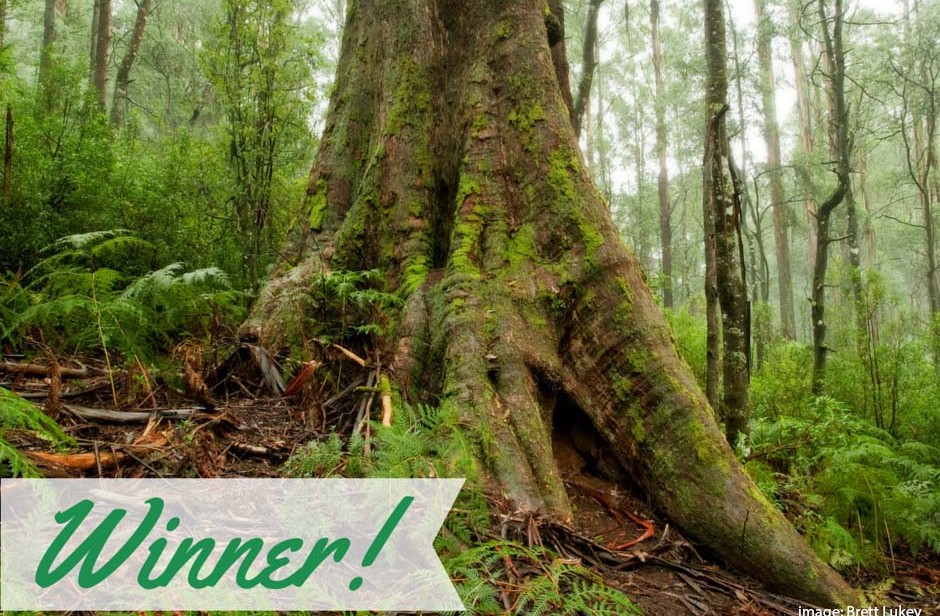 The Mountain Ash (Eucalyptus regnans), known as the ‘Kalatha Giant’, is thought to be at least 400 years old, 65 metres tall and the 7th largest tree in Victoria (by volume). The tree bears a very old scar at its heavily buttressed base (possibly from 1851) and is hollow all the way up its trunk. After the Black Saturday bushfires of 2009, the Toolangi & Castella community constructed a walking trail to the tree – for many, it is a resilient symbol of bushfire survival.

The full rankings showed there was a lot of love for trees native to Victoria this year.

The National Trust of Australia (Victoria) has classified over 20,000 trees in 1,200 places across the state on its Register of Significant Trees.  The Victorian Tree of the Year contest is inspired by the existing competitions that run across Europe each year. Fifteen countries participate annually, with the national winners competing to be crowned the European Tree of the Year.  In 2015, the Woodland Trust in the UK received 230 nominations and almost 17,000 votes from all over England, Scotland, Wales and Northern Ireland to determine the nominees in the Tree of the Year competition.  In time we hope Victorians will embrace the contest with similar fervour.  A small number of nominations were received in Victoria this year, and were assessed by the National Trust’s expert committee for significant trees to create a shortlist of nine trees.

The inaugural Victorian Tree of the Year contest aims to raise awareness for the conservation of Victoria’s natural heritage, and the benefits that significant trees provide.  In shortlisting the trees, the National Trust sought to include examples of trees that had captured the hearts of Victorians; trees with a dramatic history, or a majestic canopy. They didn’t have to be the biggest or the oldest of their kind, just one of the trees we love the most.

Anna Foley, acting Advocacy and Conservation Manager at the National Trust of Australia (Victoria) said the Victorian Tree of the Year contest recognises that trees are part of the landscape of our lives.

“This contest is a chance to celebrate Victoria’s wonderful natural heritage, unearth the stories of significant trees, and promote the benefits that trees bring to all of us.”

The winning tree, the Kalatha Giant, is certainly a tree that has captured the hearts of Victorians.

“The Kalatha Giant is a symbol of bushfire survival to the locals in Toolangi. After Black Saturday, the locals got together to build a walking trail around the tree. Its story is a beautiful example of the important meanings that people ascribe to trees,” said Ms Foley.

The Kalatha Giant is located in the Toolangi State Forest near the corner of Kalatha Creek Road and Granton Road. For visiting directions and more information about the tree, visit: http://trusttrees.org.au/tree/VIC/Toolangi/Cnr_Granton_Road_And_Kalatha_Creek_Road