The many gardens of Saumarez Homestead

The 2ha (4.4 acre) gardens at Saumarez Homestead, Armidale, were planned and constructed by the Saumarez Whites at the turn of the 19th century to complement and provide a setting for their significant Late Victorian-Edwardian house. They were planned on the model of an English prototype, but included plantings of trees, shrubs and exotics from the Americas, Africa, Europe, Asia, New Zealand and Scandinavia. Mary’s Garden was inspired by Jocelyn Brown.

The Heritage Rose Garden Saumarez Homestead has been established on the site of the old homestead orchard with the nucleus of the rose collection donated by Miss Catherine MacLean, a long time Armidale resident and dedicated rosarian. The main collection, when completed, will include over 600 roses representing each of the major rose cultivar groups, mostly bred before 1930. Adjacent to the formal garden will be beds recognising the contribution of important rose breeders both nationally and internationally.

The Saumarez garden has always been the setting for the homestead and, in many ways was an extension of the house. It provided spaces for activities which were part of the lives of the family members – in leisure and entertainment – and it contributed food and flowers to the functioning of the house.

Today the garden is only a remnant of its former self. When the National Trust took over Saumarez Homestead in 1984 there were fences cutting off the vegetable and Mary’s Garden as well as the picking garden from the main garden, all of which had become an overgrown tangle of dead and mature growth, where seedlings and noxious species predominated. Slowly the senescent and dead growth is being removed but it is not intended to restore the garden to its original condition. It will be conserved and controlled so that visitors may walk through the different sections and imagine how it may once have looked.

The garden has nine distinct areas:

This guide will take you through these areas of the garden. After the description of the garden there is a list of species. You will be able to identify each species by its number which corresponds with the number in this guide.

Your tour begins as you pass through the brick wall dividing the service section from the main garden at the front of the house. The driveway dominates this part of the garden, entering from the avenue through the double picket gate, circling the sun dial and passing through the brick wall to the service section. Family visitors used the avenue and the garden drive which was raked neatly.  The garden fence is hidden by an encircling hedge of eleagnus pungens.

This part of the garden was used and looked at daily by family members, sitting on the verandah or under the trees in summer looking back to the house. The trees are large, shady and protective.  In the aviary were Australian finches and budgerigars and their chirping would have been pleasant. The glass house, built to hold frost-tender plants such as palms, geraniums, gloxinias and other species unable to cope with the high altitude winter climate of New England, was heated by a wood fired furnace during the coldest months of the year.  Nearby is a wire arbour supporting a climbing rose and an ornamental birdbath and garden seat. The flower bed softening the line of the verandah was planted with roses and hardy annuals. Geraniums were grown here when there were staff to cover them each night from the winter frosts.

On the eastern side of the front lawn there is one flower garden – a remnant of the many different flower beds which were once located here.  They were of different shapes, such as circles, diamond, star or heart-shaped – typical of flower bed designs last century.  Roses were Mrs White’s special interest and lists s of moss, bourbon, noisette, tea, china and hybrid roses ordered from Ferguson’s nursery in 1888 still exist.  Near the verandah are two tubs of dwarf pomegranates (punica granatum nana). Along the edge of the lawn is a shrubbery with a mixture of large trees, shrubs and perennial plants. The flat open lawn was once a tennis court. In spring naturalised bulbs flower along the bank and under the deciduous trees.  Along the wisteria arbour are metal chairs, made from old tractor seats, used by those watching the tennis.

During the Second World War, the tennis court to the East of the main house was decommissioned and an area of lawn created with two Golden deodars from the Himalayas and a Norway spruce from Europe planted where the southern end of the tennis court used to be. These new plantings complemented the Ginkgo biloba (Maidenhair tree) from China, the purple and evergreen magnolias, the Acer negundo, holly trees small leaf linden, Weeping spring cherry and other species in this garden.

This section was developed by Mary White as a cottage-type garden. She used winding stone path paths, beds of perennials and annuals and made an artificial stream with small bridges, pergolas supporting an ornamental grapevine (vitis amurensis) and climbing roses. Mary’s garden stretched the length of the vegetable garden but was divided from it. Her garden shed was used to store tools, seed catalogues and various useful materials which she used in her garden.  This garden is being rescued from blackberries and undergrowth.

Remnants of the plantings in this garden can be seen with the metal supports once used for raspberry canes.  Jerusalem artichokes continue to shoot each spring in prolific numbers and small cloump0s of rhubarb and occasional asparagus plants can be found here.  A clipped cypress hedge divided the vegetable garden from the orchard beyond in what is now a paddock, where stock graze.

This section was fenced off for many years.  In that time the hedge of Arizonica cypress which had sheltered this garden and the orchard beyond matured and died, falling into a tangle with self-sown privet and cotoneasters.  Much of this has been removed to enable visitors to walk the length of the garden. Here there are surprises at each season as bulbs flower, and many different varieties of violets emerge, some of which are remnants of the 1880s plantings. Flowering trees add interest to the walk. There was another pergola here and a garden shed at the southern end.

The clothes line, wood and tool shed, meat room/dairy, garage, outdoor toilet and schoolroom were all built in this service section of the garden.  Along the western fence covered by a creeper (akebia quinata) was Margaret Simpson’s garden, which consisted of a long bench with a variety of pot-plants.  Nearby is a dovecot.  South of the western gate the fence is covered by another creeper (passiflora coerulea, blue passion flower).

The avenue which was the main entry to Saumarez Homestead was planted over several months during 1898l.  The trees were carefully mulched fertilised and protected by tree guards. An outer protective row of pines was planted to shelter the inner row of exotic deciduous trees.  The result was that the pines dwarfed the other trees which have not grown to their full potential.

During the Second World War, the tennis court to the East of the main house was decommissioned and an area of lawn created with two Golden deodars from the Himalayas and a Norway spruce from Europe planted where the southern end of the tennis court used to be. These new plantings complemented the Ginkgo biloba (Maidenhair tree) from China, the purple and evergreen magnolias, the Acer negundo, holly trees small leaf linden, Weeping spring cherry and other species in this garden.

The Heritage Rose garden at Saumarez Homestead has been established on the site of the old homestead orchard with the nucleus of the rose collection donated by Miss Catherine MacLean, a long time Armidale resident and dedicated rosarian. The main collection, when completed, will include over 600 roses representing each of the major rose cultivar groups bred before 1930. Adjacent to the formal garden will be beds recognising the contribution of important rose breeders both nationally and internationally.

The rose garden on the ten-hectare homestead site is the result of a collaborative project by the AGHS (Northern NSW sub branch) and the National Trust (NSW).

Dr Ian Telford’s imaginative design, based on a Tudor rose,  has 44 concentric beds in the rose garden and incorporates flowering fruit tree plantings in reference to the fact that the garden is established on the property’s former orchard.

The botanical name is given first, then the common name and place of origin. Cultivars – varieties produced only under cultivation – are shown as ‘cv’.  Numbers as listed below refer to species numbered in the garden.

(planted after tennis court was removed) 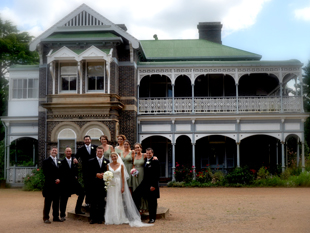 The peace and quiet of Saumarez will surround you on your special occasion.
END_OF_DOCUMENT_TOKEN_TO_BE_REPLACED 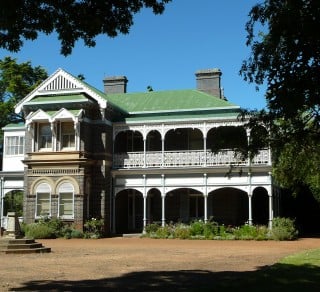 The two storey, 30 room Edwardian mansion is the jewel of Saumarez.
END_OF_DOCUMENT_TOKEN_TO_BE_REPLACED
Menu