Vienna Cottage will next be open on Sunday 13 February. Book your ticket now.

This artisan’s cottage was built in 1871, when a humble cobbler could live a stone’s throw from Sydney Harbour and think nothing of it. Virtually untouched, it gives a glimpse into life as Australia the colony became Australia the nation.

Built in 1871, it was the home of John and Ann Hillman and their five children. They lived in what was a typical tradesman’s cottage, with four rooms in the main building and a detached kitchen and laundry at the back. John Jacob Hillman was a cobbler and later also a village lamplighter. The home was originally run as a dairy and also produced fruit and vegetables from the small orchard beside the house, which to this day is preserved as a small park called Hillman Orchard.

Although having undergone few renovations and repairs over the years, the house remained in the possession of the original family until 1984, and so retained much of its original character, fittings and furniture. The house was rented out from 1926 the last tenant leaving in 1991, having acted as caretaker from 1984. The cottage had little furniture when purchased and has been maintained “as found”. Consequently, no improvements have been made but the slate roof was restored, floor boards repaired and halls not painted but sealed to keep out the moisture.

In 1984 the house was purchased by the National Trust on behalf of the people of Hunters Hill, while the old orchard was bought by Hunters Hill Council. Both were opened to the public in 1988 as part of the bicentenary project.

Vienna Cottage is in the heart of the Hunters Hill peninsula and within easy walking distance of many heritage buildings, including Hunters Hill Town Hall (26 Alexandra St), Hunters Hill Congregational Church (1 Ferdinand St.), All Saints Church (cnr Ferry and Ambrose St), Garibaldi Inn (cnr Alexandria and Ferry St), and many other private residences of historic interest.

We look forward to welcoming you at Vienna Cottage. Book via Eventbrite, where possible, to guarantee a spot.

To enter a National Trust (NSW) property or purchase a ticket you must agree to the Terms and Conditions of Entry. We thank you for helping to keep properties open and the community safe.

END_OF_DOCUMENT_TOKEN_TO_BE_REPLACED 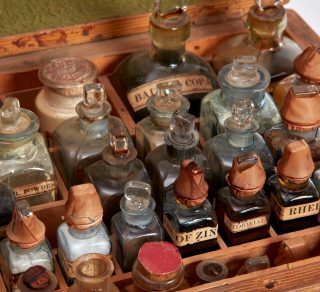 The Doctor Will See You Now – Travelling Exhibition

Travelling throughout New South Wales, The Doctor Will See You Now delves into the histories of six National Trust
END_OF_DOCUMENT_TOKEN_TO_BE_REPLACED
Menu