The Yooroonah Tank Barrier at 5809 Grafton Road, Ebor, constructed in 1942, has historic significance as one of the last inland and most intact complexes of tank barrier systems in NSW, surviving from World War II. The construction of this inland defence complex came as a response to the national threat of Australia’s invasion by Japanese enemy forces. This site is significant as it demonstrates the relationship between the federal (Eastern Military Command), state (Main Roads Department) and local (then Dumaresq Shire) governments who, by working with the community, built this barrier to protect inland NSW against the common enemy during World War II. Despite the national fear of invasion and state-wide efforts to construct these defence barriers quickly, the Yooroonah complex was not used. It also appears that, due to a halt in the construction of the tunnel after the bypass route was discovered, the explosive chambers of the mined tunnel were never charged.

The Yooroonah Tank Barrier has significance for its association with workers and miners from the community who constructed the complex under the direction of the Eastern Military Command and under the supervision of the Main Roads Department. The relationship between the three levels of government (federal, state and local) and the community demonstrated the unity of the war effort against the common enemy.

The Yooroonah Tank Barrier has significance for the aesthetic and technical qualities of the site’s layout and components. Set amongst a natural landscape of diverse and rare vegetation, the different built elements of this site demonstrate the technical achievement of the design and construction of the complex. The relationship between the man-made defence barriers (the excavated tunnel and the wooden and concrete barriers) and the natural obstacles of the surrounding environment reflect the intuitive thinking behind the design.

The eight concrete tetrahedra, grounded in the marshland of the creek, are the most aesthetically outstanding feature of the site, with this group of angular, pyramid-like structures rising out of the natural landscape.

The Yooroonah Tank Barrier has social significance as an example of the community’s efforts against the national threat of invasion during World War II. The Australian government (Eastern Military Command) ordered the construction of a number of defence systems, including the Yooroonah complex, to be constructed by Dumaresq Shire (with local tradesmen and miners) under the supervision of the Main Roads Department. This relationship, across all levels of government, saw the involvement of the local community at a time when there were severe shortages of manpower and resources in NSW.

The site also has contemporary social significance to local community groups who have, in recent years, made efforts to increase public acknowledgement and use of the site.

The Yooroonah Tanks Barrier has significance for its potential to reveal information about the design, construction and function of inland tank-barriers during World War II. The construction of these complexes was a response to the national fear of Australia’s invasion by enemy forces and, as a surviving example of one of the, approximately, 50 complexes built in eastern NSW, the Yooroonah site has the potential to reveal further evidence about the philosophy behind this method of defence. Further analysis of the site could reveal information about the relationship between the different sections of the complex (the tunnel and concrete and wooden barriers) and the remnants of the ‘quarters’ and huts may also explain how the site was operated and how life on the site may have been.

The Yooroonah Tanks Barrier has significance for its rarity as one of the last remaining and most intact complexes of inland defence systems in NSW (dating from World War II). Out of approximately 50 barrier systems constructed in eastern NSW during this period, the majority of these complexes were removed, dismantled, destroyed or modified after the war but the isolation and limited public access to the Yooroonah site has ensured its survival and preservation. The survival of the tunnel, explosives chamber and the collection of concrete and timber post obstacles are rare physical evidence of how man-made barriers, alongside the obstacles of the natural environment, were used as a defensive system during the war. Having never been used and surviving largely intact, the site is still able to demonstrate the principal characteristics and functions of this type of World War II defence system in NSW. As a surviving inland barrier, the Yooroonah site is also rare in NSW as other tank obstacle complexes (including sites in Wollongong, Great Lakes, Tenterfield, Dee Why and Newcastle) do exist but are largely located in coastal areas.

The Yooroonah Tank Barrier has significance as a representative example of an inland defence system from World War II. With a growing national fear of invasion by Japanese enemy forces during the war, Australia’s response was to develop defensive barriers and anti-tank obstacles along the coast and on strategically important inland routes. Approximately 50 barriers were constructed in eastern NSW (eight in Dumaresq Shire) and the Yooroonah Tank Barrier is one of the largest and most intact examples remaining in NSW. Most barrier systems were removed, dismantled, destroyed or modified after the war and the survival of the Yooroonah site is largely due to its isolation and limited public access (a bypass road was constructed after the war, which has been a significant contributing factor to the protection of the site). The siting, layout and physical fabric of the site also represent the principal characteristics of inland defence systems in World War II and demonstrate the key functions and operations of the complex during this period.

The principal elements of the site are intact. The tunnel and concrete tetrahedra are in good condition but the timber post barriers have some wood rot and fire damage. There was some disturbance at the south eastern section of the site when the bypass was constructed (now Waterfall Way) but, although this development cut through some of the wooden barriers, it has largely isolated and protected the complex from non-natural causes of deterioration.

The integrity of the site, however, has been somewhat compromised in recent years. In 2004, some unauthorised work to create an access way, in an effort to increase public use of this site, was carried out. The path extends from the mined road to the tetrahedra barrier in the marshland and cuts very close to the wooden post barrier and, in doing so, has caused some archaeological damage. 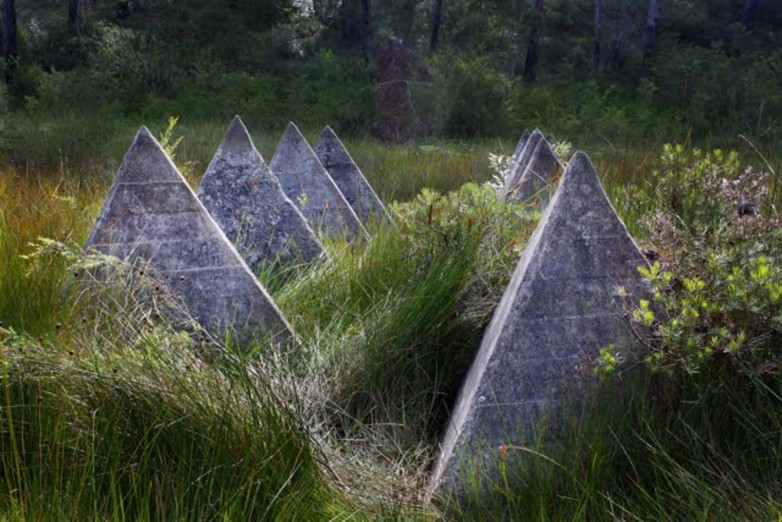 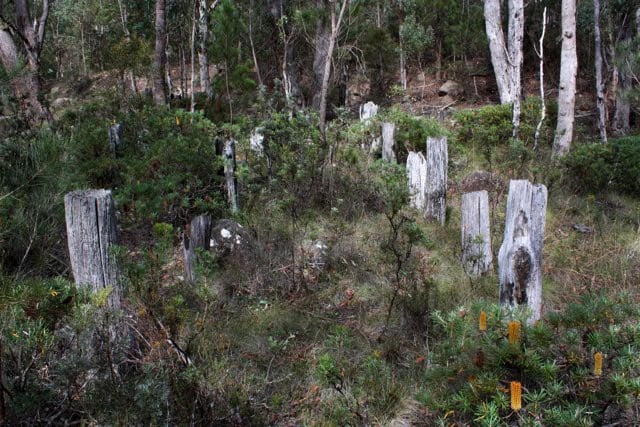 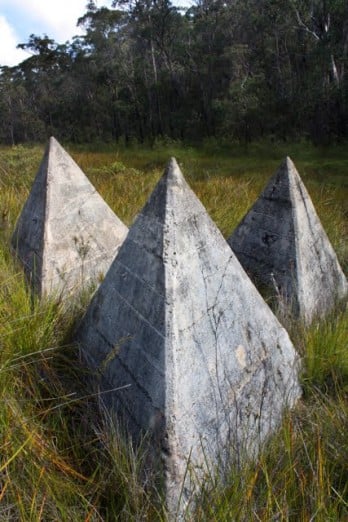