NewsNew South WalesWe’re all about women at Old Government House

Some of the names you know, some of them you don’t – all of them are remarkable for their courage, their stories and their strength. From 31 August 2019 to 16 August 2020, the National Trust (NSW) will be telling the stories of the Vice-Regal Women, servants and visitors who lived in, worked at, visited or influenced the World Heritage Listed Old Government House in Parramatta.

The year-long exhibition explores the stories of women such as Mrs Anna King; the first governor’s wife to arrive in the colony, who, during her marriage to third governor Philip Gidley King, co-established an Orphan Institute, which set the standard for the social work of the vice regal women to follow. Her support of her husband and her charitable work in the colony earned her the nickname of ‘Queen Josepha’.

Visitors to the exhibition will also learn about Elizabeth Clarke, who was convicted in England of stealing goods to the value of £60 and sentenced in 1807 to seven years’ transportation to NSW. The vessel, Speke, sailed with 97 female convicts and also included several naval officers. Once in Parramatta, Elizabeth was listed in 1814 as a servant at Old Government House and went on to marry and have three children.

“While many of the women who lived in, or visited, Old Government House, are very well known in the telling of Australia’s history, many more are invisible,” said Rosalind Mearns, the National Trust (NSW)’s Regional Manager for Western Sydney. “We know about Elizabeth Macquarie, Lady Mary Fitzroy and Elizabeth Macarthur, yet the servants and convicts remain almost entirely nameless and even two Governor’s wives remain faceless with no known portrait.

“The National Trust is fortunate to hold in its collection items that belonged to some of these women, which will give us an insight into what life at Old Government House and the colony was like from a woman’s perspective,” Rosalind Mearns says. “Visitors will also have the chance to interact with the exhibition and create their own personal silhouette, taking a photo of it on their phones.”

In parallel with the exhibition, there will be a range of public programs, including Curator Talks, Discussions over Dinner, children’s school holiday activities and a special picnic on the front lawn of Old Government House. 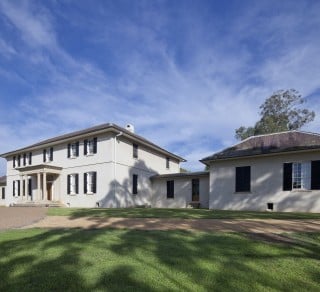 This convict-built Georgian house and its surrounds is a World Heritage site.
END_OF_DOCUMENT_TOKEN_TO_BE_REPLACED
Menu