National Trust volunteers are finalists in the NSW Volunteer of the Year Awards 2021.

The National Trust is a not-for-profit, community organisation that relies on the generosity and support of 1,200 volunteers state-wide. We couldn’t do our vital work without volunteers and appreciate the contributions from each individual.

Now in their 15th year, the NSW Volunteer of the Year Awards have grown to become one of the largest celebrations of volunteering in Australia, and the annual program provides an opportunity to recognise the outstanding work of National Trust volunteers in every region across New South Wales.

The National Trust had volunteers nominated in three out of the eight Judging categories, and 15 teams and six individuals were nominated in the Recognition stream of the Awards. Marie Kennedy, was awarded the NSW Southern Inland Senior Volunteer of the Year award for her work making sure Riversdale can be enjoyed by future generations, and the Deloitte Impact Day team are finalists for the Corporate Volunteer of the Year award category. 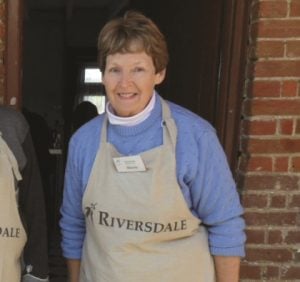 Marie started volunteering with the National Trust more than five years ago as a tour guide. Since then, she has been an integral part of the operations at Riversdale, including managing the office and training other volunteers, plus plenty more.

Having done little volunteering before, Marie was drawn to the role through the stories of those who once inhabited Riversdale.

“The first day I was there I was given some information to read about the property and it just got my imagination going, with some of the things that the people who had lived in the house had done,” Marie said.

“I started to do more of my own research because some of the residents hadn’t been researched and I found that everybody who had lived in the house had a story to tell.” A small group of Deloitte employees have also played an important role improving the National Trust’s operations. On behalf of the charity, the Deloitte Impact Day team produced a short video on what it means to have a diverse and inclusive workplace, to use at staff and volunteer induction programs.

The project helped the Deloitte team learn about the value of heritage in New South Wales, and it will help the National Trust share its values of being an independent, trustworthy, inclusive and inspirational organisation that advocates for the conservation of heritage.

Team leaders, Louise Farrelly and Trevor Richard, experts in the technology and transformation space, were able to take the National Trust’s ideas and develop them into a practical, easy to use tool. Louise and Trevor, were delighted with the unexpected award.

“The team, Trevor and I all volunteered our time because we are strong believers in giving to a worthy cause, and the National Trust ‘ask’ certainly matched this. To be thanked and acknowledged through the nomination is unexpected and incredible and I know I speak on behalf of the team in saying we are all very appreciative of this support,” Louise said.

If you would like to volunteer with the National Trust, apply now.