On 30 April 2020, the National Trust (NSW) asked the community to complete a survey about the Powerhouse Museum at Ultimo. The community could participate in the survey until 8 May 2020. The purpose of undertaking the survey was to quantify and qualify the significance of the museum in its current location at Ultimo, its built, social and cultural heritage, and the significance of its collection to the people of New South Wales. The National Trust (NSW) distributed a link to the online survey to its members and subscribers to its eNews, to the organisation’s Facebook, LinkedIn and Twitter followers.

The National Trust (NSW) received 1,320 responses to its survey.

“The overwhelming response to the survey we conducted was that people want the Powerhouse Museum and its collection to remain where it is,” said Graham Quint, National Trust (NSW)’s Director, Conservation. “People from all postcodes across Sydney, throughout New South Wales and around the world participated and shared their views with us. The responses indicated that the Powerhouse is such a socially significant place, a fine example of built heritage in its own right and contains an extraordinary collection that tells the story of innovation, technological development, progress and advancement in Australia.

“It is regarded as a powerhouse of knowledge for inquisitive minds – young and old alike – and its location in the precinct of the University of Technology, Sydney speaks volumes of our need for yet more discovery in the field of STEM. It is also ideally placed for the tourism and transport hubs of the CBD and the fact that it is actually a Powerhouse – it simply belongs where it is,” Graham Quint said.

“The National Trust (NSW) was so dismayed to read over the weekend that the NSW Premier, in considering the relocation project for the Powerhouse, decided to proceed. We have more than 1,300 people who took the time to share their thoughts on how important this place is to them and they did this in the grips of a global pandemic as they watch the social and economic ramifications of this crisis unfold,” Graham Quint said. “It is that important to people.”

Two key questions in the survey were:

Some key community sentiment about the importance of the Powerhouse Museum at Ultimo’s significance to the people of New South Wales was reflected in the following results:

As a result of the survey, the National Trust (NSW) has made a submission to the Heritage Council of New South Wales to consider placing the Powerhouse Museum at Ultimo and its permanent collection on the State Heritage Register.

The National Trust (NSW) maintains its position that:

“We urge the Premier of our great state to reconsider the decision to relocate the Powerhouse Museum, to hear the community, recognise the significance of this wonderful cultural institution and where it is located today,” Graham Quint said. “It would be a beacon of hope that while the world is changing in many frightening ways around us, the community can be heard, their views can be appreciated and our Government will listen.”

Graham Quint, Director, Conservation at the National Trust (NSW) is available for interview: 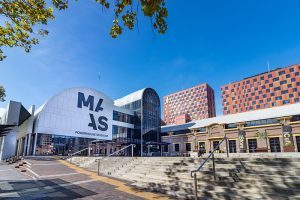 The Powerhouse Museum in Sydney, Australia.