Thanks to the hard work of a group of Maitland-based artists, the spirit of Lily Briscoe will be alive at Brough House during April. 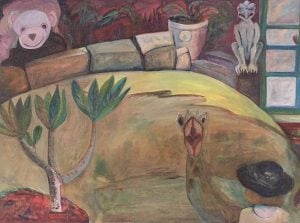 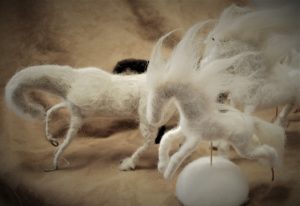 The Maitland-based artists are staging an exhibition titled Lily Briscoe and Friends at Brough House. The artists in the group are Sue and Sinead Cone, Paul Durell, Helen Hopcroft, Jenni Nichols, Alex Rennie and Deborah Van Heekeren. With the exception of Durell, the group met while attending Inside Out, an inclusive arts group hosted by Maitland Regional Art Gallery (MRAG) and supported by Octapod, a Newcastle-based Arts organisation. But who is Lily Briscoe?

Deborah Van Heekeren, the curator of Lily Briscoe and Friends, explains that Lily Briscoe is not a real person. She’s a minor character from Virginia Woolf’s most popular novel: To the Lighthouse. In the novel, artist Lily Briscoe is told by a male character that “women can’t paint, women can’t write”, and this dismissive phase echoes like a refrain throughout the book.

After meeting at the Inside Out meetings, Van Heekeren, Hopcroft and Cone decided to form a feminist art group. After pondering what to call themselves, Van Heekeren suggested the Lily Briscoe character as a tribute to female creativity and tenacity. Despite being told that it was impossible, Lily Briscoe continued to pursue a creative career and immersed herself in her painting.

The exhibition’s name was chosen to reflect some of the challenges faced by female artists.

She says that the aim of the group is “to support each other, and create a network in Maitland for contemporary art”.

The Lily Briscoe group of artists intend for this to be the first in a series of exhibitions of their artworks. As a group, they are committed to creating contemporary art that challenges gender stereotypes, blurs the line between the domestic and the mythological, and looks for heroism in everyday experiences.

“The thing is that we don’t have a separation between our domestic lives and our art”, says Sue Cone.

“We don’t generally go off and travel. Most of our work is informed by our domestic situation.”

For example, Cone crafts soft pieces of felt into toys that resemble mythological figures such as Icarus; Van Heekeren’s dream-like paintings blur the line between reality and the imagination, and are often populated by literary characters or anthromorphised domestic objects or animals; and Hopcroft will be exhibiting Art Deco wallpaper inspired paintings that originally formed part of the stage set for Maitland Repertory Theatre’s production of Out of Order.

The exhibition will include a diverse range of artworks. Alex Rennie’s striking abstract paintings were inspired by Gerhard Richter, and her scraping technique combines an element of chance with careful colour choice. Jenni Nichols is exhibiting prints and ceramics based on the female form, part of a body of work that talks about how women change throughout their lives. Finally, Paul Durell’s landscapes celebrate the contrast ‘when the mountains and bush hit the bitumen’.

Brough House is a National Trust property, and the former home of Maitland Regional Art Gallery. After a recent renovation, Brough House has re-established itself as an exhibition venue. To add to the sense of history coming full circle, the exhibition will be opened by Joe Eisenberg, the former director of MRAG, who pushed for the creation of a new building to house the gallery and its collection.

Lily Briscoe and Friends is on display at Brough House (next to Pender Place), 73 Church Street, Maitland from 10am to 3pm on Fridays, Saturdays and Sundays from Friday, 6 April to Sunday, 22 April, 2018. The exhibition will be formally opened by Joe Eisenberg on Saturday 7th April at 1pm (opening event concludes at 3pm). All works are for sale.

For more information, contact Deborah Van Heekeren on 0478 596 535 or via Deborah.vanheekeren@mq.edu.au