Matthew Willman’s photographic works are on display at Retford Park in Bowral in March 2020. Here, he conveys his personal experiences and perspectives on Nelson Mandela, conservation and the plight of the white rhino – all captured through his photography.

One of the most extraordinary perspectives I have gained working with orphaned wild animals is how unpredictable they can be. You become acutely aware of how, in this case, rhinos behave and interact with the world around them. Everything is planned and anticipated until one of them does something completely out the ordinary like use you as a rubbing post or to lean in wanting a body or chin scratch. The personality in each rhino is what helps to drive my passion for our endangered species all the more.

Every vulnerable animal is an important lifeline in continuing the chain of succession and stability of the species the world over. Images are powerful on their own to tell their story but when you go a step further and make the endangered animal a part of the final artwork, then you’ve truly created something unique. 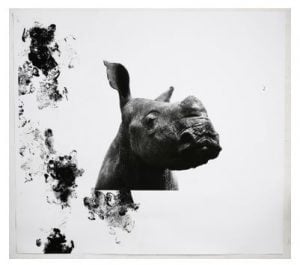 Never before in the history of the Zululand white rhino has there been a collaboration to get a wild endangered rhino to personally ‘autograph’ their own photographic portrait. The idea came to me while I was working with singer/songwriter, Annie Lennox, in Cape Town.

We were discussing conservation in Africa and how the arts could support the cause of endangered species when the idea dawned on me to get a rhino to walk over one of the prints. Sounds straightforward, but it soon proved a near impossibility.

The first two attempts were complete disasters. Having a 500 or 600 kilogram adolescent rhino standing on expensive German Etching Paper was a disaster. The animals completely destroyed the works and we failed on the first two attempts. I went away distressed. Two weeks later I returned with a plan. Creating a boma passageway, we led the rhino on a single straight line over the print. With speed and direction and as little time on the actual print as possible, we created these truly magnificent artworks. 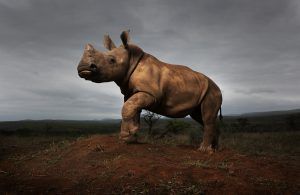 It takes the patience of a saint to document a superb portrait of a wild rhino – for all the elements to come together and the timing needed. But to capture one prized moment on camera was priceless.

We set up our outdoor studio right next to an old ant hill. In the distance, three white rhino were huddled under a thorny acacia tree. With a careful eye on the approaching stormy weather, we knew we only had a maximum of 15 minutes left of light and calm weather to attempt this shot.

We placed Lucerne pellets on top of the ant hill which immediately attracted the rhino. We all stepped well back, holding our breath, and waited. A very cautious young male rhino we call Ntoto arrived on the scene first. He was totally engrossed with hoovering up the Lucerne pellets. He climbed the old ant mound and with two flashes triggered remotely, I knew I had the shot. Almost immediately the flash of the studio lights caused Ntoto to become uncomfortable. He looked up raising his huge head and as if to establish his authority, he lifted his front foot and began to thump the ground. It was at that moment I captured this one iconic photograph. A priceless moment held forever. 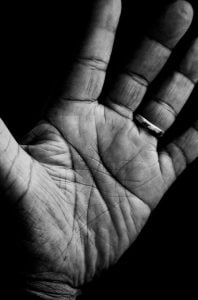 Considered one of the most intimate photographs of Nelson Mandela, this image has done more for the cause of charity and HIV Aids globally than any other image of Mandela. I captured the image during my very first engagement with Nelson Mandela on the 13 August 2003. I was 24 years old and had just come off living and working on Robben Island. When I saw Mandela’s hands moving in the morning window light I was transfixed. I leant over his shoulder and took this one single photograph.

The humanity behind this image is incredible.

The hands that held the cold iron bars of prison for 27 years.

The hands that could not love and hold his wife or children for 27 years.

Yet it was the same hand that reached out to shake the hand of his then enemy and preach forgiveness was for the first time immortalised.

My only desire of this exhibition at Retford Park is for people to appreciate the incredible depth this small collection of work embodies. It took 15 years to create many of these works.

Please click here to see more about the exhibition, including details of the house tour and dinner.