The University of New England has announced the imminent demolition of most of the State Significant, Michael Dysart designed Robb College.

In 2014, the NSW Heritage Council resolved to recommend the listing of Robb College on the State Heritage Register, to the Minister for Heritage. The National Trust and the Institute of Architects (NSW Chapter) have both written to the Heritage Council on this issue.

Robb College was listed on the National Trust Register in July, 2012. 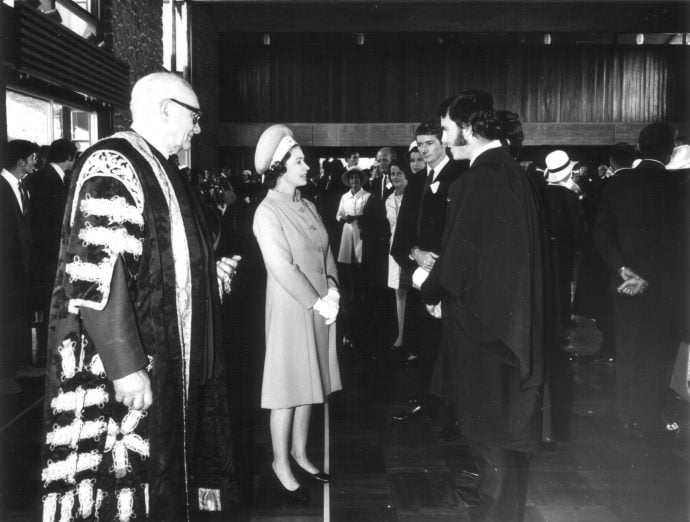 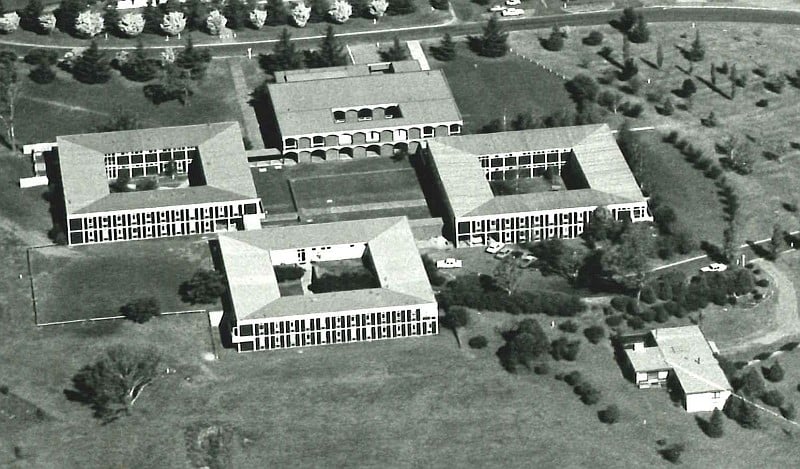 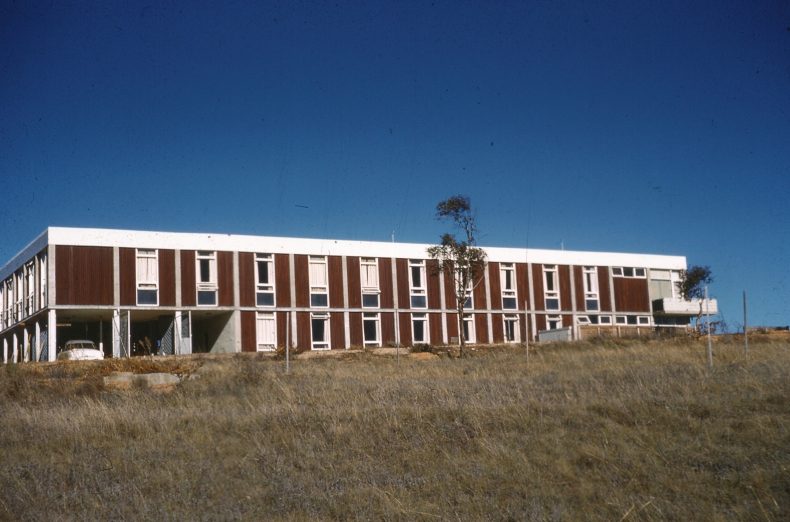 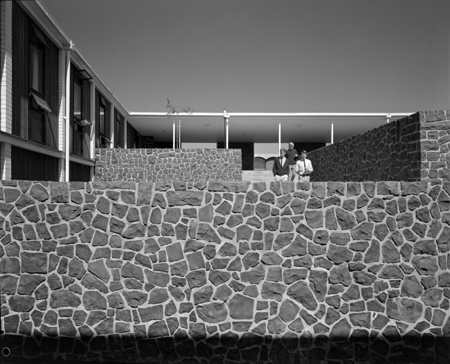 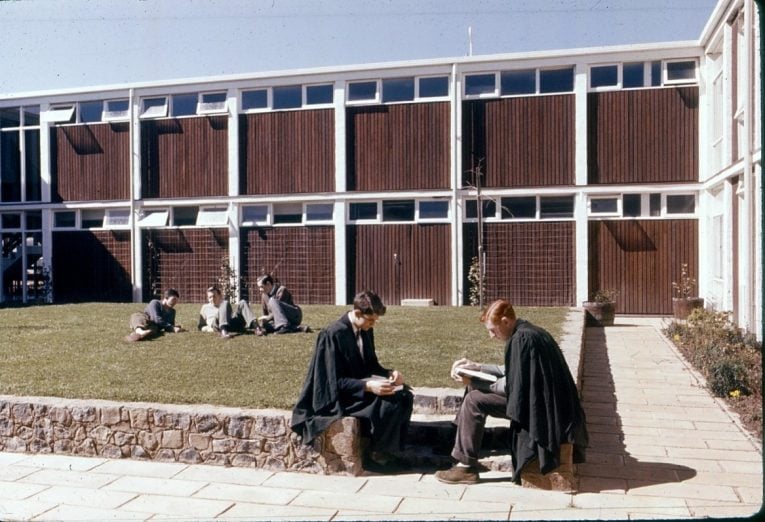 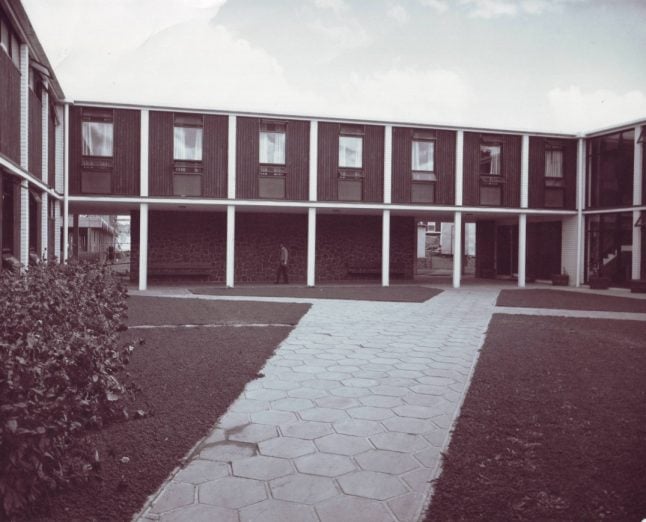 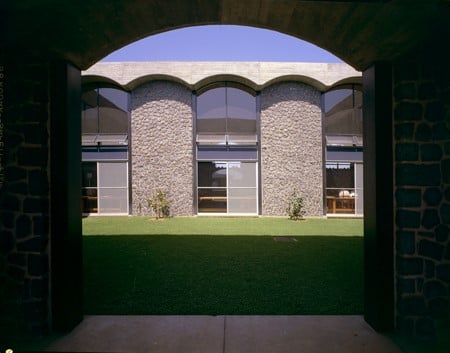 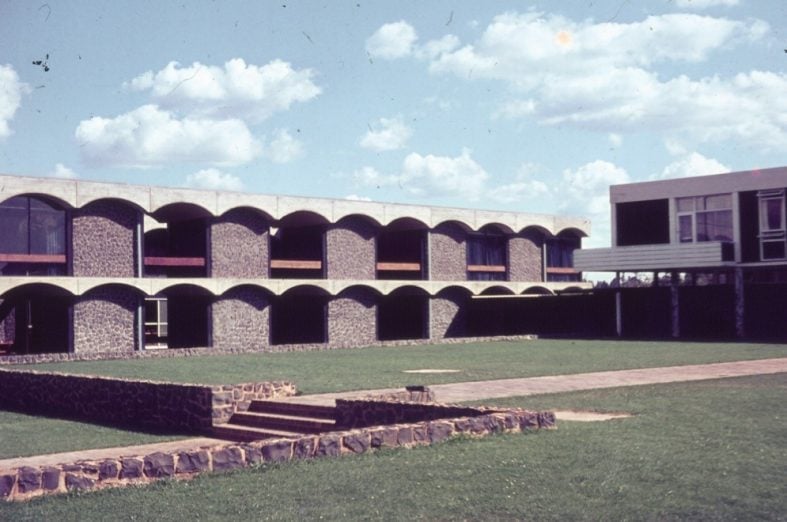 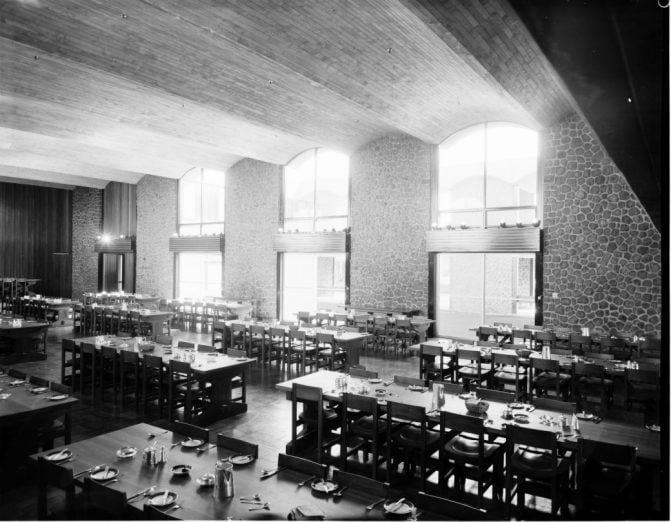 Robb College is one of the first modernist college buildings to be erected on a university campus outside of Sydney. The use of the traditional quadrangle form widely employed for university colleges shows a renewed interest in the use of the Oxbridge model, rather than the American type campus planning of isolated buildings set in parklands.

The design is significant as one of a series of highly individual university buildings designed by the NSW Government Architect’s branch in the late 1950s and early 1960s. It is also a significant example of the work of Michael Dysart.

The building illustrates a high degree of aesthetic significance through the use of standardised mass produced elements carefully arranged to achieve variations in the structure and courtyard and as a result cost saving through economy of scale.

The buildings’ social significance is expressed through the modern interpretation of the traditional courtyard and quadrangle akin to the Oxford model, and through the use of austerity in materials and importance of transparency and connection through the displacement and interconnection of spaces.

The Dining Hall Block is a well designed building, as indeed is the entire College complex, which through the clever interface of the four quadrangular buildings works as a unity despite the very different character of the dining hall block and the residential courts.

The College complex illustrates remarkable skill in the way practical and aesthetic considerations were combined to produce a building of the high quality while utilising the concept of mass production. This is particularly impressive achievement given the budgetary constraints. The construction costs were just over £2,000 per student making it the cheapest of the University of New England Colleges to build.

It is especially remarkable that it was the work of a 24 year old trainee in the NSW Government Architect’s Branch. This makes it a very apt building for a place dedicated to the nurturing of young minds. Robb College belongs to a sub-set, yet to be fully explored, of high quality substantial buildings designed in Australia by young architects. The list includes C. B. Alexander Presbyterian Agricultural College, Tocal, near Paterson, NSW designed by 25 year old Philip Cox in association with Ian Mackay in 1965 and the Old Treasury Building, Spring Street, Melbourne designed by 19 year old JJ Clark in 1858.

Michael Dysart went on to develop the quadrangular form he pioneered at Robb College and incorporated  the concept into the design of high schools for the NSW Department of Education.

Dysart’s work at Robb is part of a special period in NSW architectural history when there was both a widespread public interest in good design and a strong commitment to it by the NSW Government Architects Branch. Under the creative stimulation of the Senior Designing Architect `Harry Rembert a number of talented young architects including Michael Dysart,   Ken Woolley, Peter Hall, Peter Webber, Andrew Andersons and Lionel Glendenning were nurtured.

The Robb College was founded in 1960, named after the first Registrar of the University of New England, Mr William Menzies Robb. The College was originally established as a men’s college, then in 1977 female students were accepted. The College is non-denominational.

The College is known for its strong community spirit and emphasis placed on leadership, character, integrity and participation.

The brief was to design a men’s college for 206 student and 7 fellows with a range of services required by a university college including a formal dining hall, senior and junior common rooms and a library.

The college consists of four buildings: three residential and one containing auxillary services, arranged around a central quadrangle.  These buildings were built at different stages: south court (1960), north court (1962) west court (1963) while the dining hall and common rooms were completed 1964.

The design of the College was based on the urbane solution of the traditional courtyard and quadrangle not unlike Oxbridge model.  Dysart’s idea developed in a pinwheel formation around a central courtyard, allowing the buildings to be connected in a minimal fashion avoiding issues of privacy from adjacent dormitories. It also allow for the interconnection of the four buildings under cover.

The project was built on a tight budget as post war austerity was still a reality. This was not considered a problem as the Design Room under assistant Government Architect, Harry Rembert’s leadership was very conscious of the ethos that good design should be timeless and not dependant on excess or fashion.

Dysart has alluded to the De Stilj movement and the work of the Dutch painter Piet Mondrian (1872-1944) as a possible influences.

Robb’s college is located on five acres of land in the Bellevue area of the University of New England campus.

The College consists of four rectangular courtyard buildings arranged to form a pinwheel formation, around a central courtyard. The structures are interconnected through covered links arrangement at their ends, providing minimal connection while avoiding issues of privacy from adjacent dormitories.

The internal walls are masonry and are expressed externally as pilasters, while the infill between the pilasters are stained timber, creating orderly rhythm of repetitive squares and grids a dominant expression of the residential courts.

Similar attention to detail has been given to the internal fit-out of the accommodation blocks. The students rooms although small 10’ x 9’ (3m x 2.75m) where located to either side of a 3’ 4” (1m) wide corridor. The rooms were clustered a widen section of the corridor allowing all the doorways of each group of rooms to feed from the common space.

The three residential courts share the same architectural idiom and are based on the same design formula. The architect has however detailed each court to provide their own identify through the use of  different treatment to the cloisters/ colonnade at their connection to the main court. For example the south court colonnade consist of slender steel columns in-filled by open vertical steel screens, while the West court is constructed from basalt, the North court  is a basalt wall is open at each end. The ground floor elevations of the three residential quadrangles are raised on piloti’s which take the form of abstract cloisters or colonnades. The device is an economical way of providing undercover links between the various college buildings while echoing traditional university college forms as well as modernist design ideas.

Similiarly the courts or each quadrangle differ in their approach.  The landscaping of the three residential courtyards has been contrasted by making North Court level with the northern end of the main quad, giving South Court a raised quadrangle and utilizing the sloping topography of West Court and basalt retaining walls to create a quadrangle on four levels.

Completed in 1964, this block houses a formal dining hall, kitchens, senior and junior common rooms, the college administration and a flat. It makes up the fourth side of the main quadrangle.

In contrast to the lightness of the residential courts the dining hall block with its basalt walls (constructed from fieldstone found on the site) and pre-formed concrete vaulted ceilings, is a robust building of monumental character.

In plan it consists of a double height dining room from which project two pavilions linked by what was originally a double height open arcade (the first floor arcade was later enclosed).

Early schemes for the dining hall roof involved the use shell construction to create a series of scalloped segmented arches. This was a fashionable device at the time for spanning large areas and had been pioneered by the Italian engineer Pier Nervi (1891-1979) and the Spanish architect Felix Candela (1910-1997).

In the Australian climate the valley gutters which are a concomitant part of this form of roof are impractical. In some other buildings of the early 1960s, such as Stephenson & Turner’s new buildings at Gowan Brae for The King’s School, Parramatta, it has been found necessary at considerable expense, to replace scalloped roofs with a different form owing to the difficulties of controlling the egress of water.  It is fortunate therefore that Michael Dysart’s thinking at Robb moved towards a different solution.

He has noted his interest in mid nineteenth century experiments in fireproof roofing at the Thomas Rowe (1829-1899) designed Sydney Hospital and the James Barnet (1827-1904) designed NSW Lands Department Building.  Here steel “I” beams are used for the long-span and vaulted pre-formed corrugated iron provides permanent formwork which is filled with concrete.

E.H. Farmer, NSW Government Architect from 1958 to 1973 records in his memoir `Some recollections of my association with the University of New England’:

Off form concrete, rather than corrugated iron, which was felt to be too industrial in character, was used to create the vaults. This work is of exceptional quality.

The change from a light weight roof to concrete vaults brought with it a different approach to the vertical elements of the building. The light weight columns of the early scheme were replaced with robust basalt piers. The initial version of this scheme included a large reflecting pool. In later plans the reflecting pool was reduced in scale, and then finally eliminated.

The Dining Hall Block includes other interesting rooms. The Senior Common Room is particularly fine. H.J. Harrington in his `Early History of Robb College, 1974’ writes it is the most beautiful room in the university. Like the dining hall, it is furnished with custom made furniture designed by the architect. In addition a modern sideboard, a Japanese lamp and a suite of Danish chairs were ordered from the noted interior decorator Marion Hall Best. Lady Hall Best also submitted a proposal for curtains. While the original soft furnishings do not survive much of the furniture does.

The junior common room comprises two rooms. These are inventively linked by a bridge which has been created by extending of one of the ground floor ceiling vaults through the void of the main stair lobby.

The overall planning of the dining hall block is excellent. The provision of separate staircases to the Senior and Junior Common Rooms and their connection via, what was originally, an open arcade provides the opportunity for a delightful architectural journey through the building which unfolds sequence after sequence of interesting spaces.

There are a number of alterations and additions that unfortunately have compromised the original design intent.  Fortunately the majority of the modifications are reversible:

The alterations and additions are noted below: 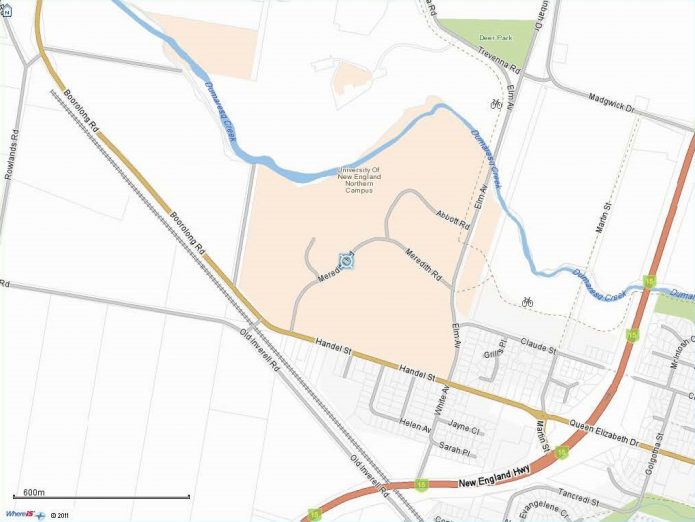