Since the commencement of its covenant program in 1999, the National Trust has entered into 184 covenants over 340 land titles, protecting 18,574 hectares of bush. Bushland covenants play a vital role in preserving our State’s biodiversity and supporting conservation of natural heritage values on private property.

The Trust is pleased to welcome two new covenants into the program in Rosa Brook south of Margaret River.  Together the two covenants total approximately 30 hectares. The bushland is important habitat for a number of threatened species such as Red and White-tailed Black Cockatoos.

The parent property was originally part of a Group Settlement Scheme established after the Great War. Most of the land was cleared to establish a dairy farm and logging for jarrah took place at various times. Two areas of bushland contain scattered laterite (coffee rock) and were considered unsuitable for grazing, hence left in their natural state.

The property has remained with one family since its purchase in 1951. They planted potatoes and grazed sheep. As the property passed down through the family, areas of remnant bushland were partly fenced-off whilst the cleared land continued to accommodate sheep. The property is currently undergoing subdivision which has given rise to the two areas of fenced remnant bushland becoming conservation covenants.

Although the bushland has been intensively logged over the last 100 years there are still patches of bush containing gnarly old mature jarrah, marri and sheoak trees. These trees and intact understorey support various fauna such as the Yellow Robin. 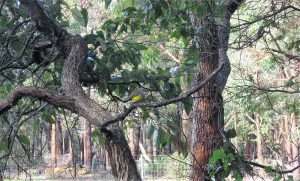