INSPIRE offers five emerging or established Western Australian writers a stipend of $5000 each and a residency for up to 15 days in a National Trust heritage place.

Now in its second year, the INSPIRE Writer in Residence initiative is a partnership between the National Trust of Western Australia and the State Government.

Following an open call, 42 applications were received, double the number of submissions in 2020. The five successful writers for 2021 are:

“Writers bring new ways of looking at the interventions people have had on place and the many subsequent impacts.

“Most importantly, the National Trust is interested in engaging with ideas, values and stories that open the public’s eyes to who we are today as West Australians. Congratulations to the five writers who have been awarded a residency, we are looking forward to learning more about the work INSPIRE will help them accomplish.”

The assessment panel commented on the high calibre of applications, and commended the National Trust of Western Australia on providing a vital opportunity for writers to invest their time into unlocking the stories of our state’s history. The panel included:

The INSPIRE residency offers opportunities for research, creative and professional development, encourages excellence in writing and nurtures connections to publishers. Through immersion in the rich cultural heritage the properties offer, INSPIRE aims to generate new Western Australian stories, as well as bring a fresh eye to interpretation and engagement with our history and heritage.

2020 INSPIRE recipient Maddie Godfrey won the 2020 Tom Collins Poetry Prize with the poem ‘Unmade’, a piece inspired by the surroundings during a residency at Peninsula Farm.

The 2021 INSPIRE residencies will take place between June and October.

Nandi Chinna will be in residence at Woodbridge

Nandi Chinna works as a research consultant, creativity facilitator, and poet based in Western Australia. Nandi’s artistic practice is described as being embedded in, and arising from, personal involvement in place and community. Her poetry has its genesis in a strong determination to craft creative works and poetry as a response to the ecologies and layers of history attached to particular places. Her poetry collections are published by Five Islands Press, Picaro Press and Fremantle Press. She has won the Tom Collins Poetry Prize and Byron Bay writers Festival Poetry Prize, as well as being highly commended for the Victorian Premier’s Prize in 2019 and shortlisted for the Prime Minister’s Literature Award in 2020.

Nandi’s interest in Woodbridge is primarily its location on the Swan River, and its significant role in the early development of the Swan River colony. She is interested in how the establishment of the site is connected to the proximity of the Swan River, and associated underground water and wetlands, and how the families that colonised the site used and interacted with the river. She is also interested in the pre-colonial history of the site and how it was lived in, used, and understood by the traditional custodians, the Whadjuk Noongar people. Nandi’s aim is to create an original suite of 10–12 poems which arise from embodied, intellectual and creative immersion in the site, its history, and surrounding river and wetlands.

John Mateer will be in residence at Peninsular Farm, Maylands

John will research and develop a fiction (prose or poetry), with the working title, The Aerodrome. It will draw on the locality of Maylands and East Perth, focused in particular on the history of the little-known Maylands Aerodrome, Perth’s first airport. The Maylands aerodrome was an important connection to the outside world in the past. Its history also records many events of national and international significance – among them, the record-breaking arrival of Charles Kingsford Smith, the war-time presence of US bombers used on missions in South-East Asia, and the arrival of refugees fleeing the Japanese invasion of the Dutch East Indies. The Aerodrome will be a story about Iain, a man in his late twenties, who is fascinated by the idea of flight, obsessed with the aeroplanes of the former aerodrome and the memories they evoke.

Lisa Collyer will be in residence at Woodbridge

Lisa Collyer is an emerging poet and educator. She writes poetry with a focus on women’s bodies and how their experiences shape their everyday lives. She is a participant in the Westerly Writers’ Development Program, The Four Centres’ Emerging Writers’ Program, and is a member of the Voicebox collective. She has been published in numerous anthologies and online journals, including Cordite Poetry Review, Not Very Quiet, and Rabbit Poetry Journal.

Lisa is interested in Woodbridge and its incarnation as an Old Women’s Home. Lisa states: The Royal Commission into aged care called for an overhaul of values and attitudes towards the aged, as well as for more self-determination. This is especially the case for elderly women. Their representation as ‘old women’—both in contemporary society, and in relation to the heritage site—is as an unindividuated group to be pitied.

Lisa seeks to represent elderly women as having agency: to articulate women on their own terms, not just in relation to their families as a mother or wife. Lisa is inspired by the story of Miss McCauley, a former resident whose sight completely deteriorated while living at Guildford Women’s Home. Lisa will explore writing about Woodbridge using the senses, bar sight; recording the body’s experience of an overcrowded, rundown home through the smells, tastes, sounds and touch of the place. She also wants to write about the relationship of class to space, the rooms as adjunct, the back door entrance for tinkers, the spare versus the ornamental, and how hierarchised bodies navigate these. Her poetry allows time travel, crossing boundaries between contemporary representations of ageing, aged care, and the conservation site.

John Toohey will be in residence at East Perth Cemeteries

John is currently a PhD candidate in Art History at Concordia University, Montreal, Canada. John’s experience combines photography and social history, and recently includes the production of audiowalks, engaging listeners, readers and viewers in appreciating the hidden traces of the city around them.

During his residency John will develop four or five audio stories, to be available as podcasts, able to be downloaded and listened to while public visit the site.

The research will involve examining records relating to the cemetery and the people buried there to uncover stories. The stories will reveal aspects of Perth history that are not generally known. Some stories associated with East Perth Cemeteries include the impact of early epidemics, the class and cultural divisions evident in the layout of cemeteries that reveal social thinking, and the lives of individuals whose experiences also reflect broader social thought.  John states: There are two compelling processes available to historians: one is to tell a story that has so far been lost or otherwise hidden. The other is to shift people’s perspectives so that old ways of thinking are discarded. Audio stories are a brilliant vehicle for both, especially when people are encouraged to listen to them on site.

David Allan-Petale will be in residence at Curtin Family Home, Cottesloe

David’s debut novel, Locust Summer, will be published by Fremantle Press in July 2021. The manuscript was shortlisted for the Australian/Vogel’s Literary Award and developed through a fellowship at Varuna, The National Writers’ House

David was a radio, TV and online journalist with ABC News in regional Australia for many years, before working for BBC World News and Al Jazeera in London.

David is researching for his second novel, Black Clouds, which is set in and around Fremantle harbour during the Second World War. The residency at Curtin Family Home in nearby Cottesloe provides the opportunity to create this work amid the surroundings of heritage buildings strongly linked to the period, affording Black Clouds a deeper sense of place, inspiring his writing process to create characters with authenticity.

Black Clouds seeks to illustrate the ordinary, everyday struggles and temptations of the home front in WW2. The Curtin Family Home in Cottesloe will inspire through the quiet heritage of its suburban street, the proximity to the Indian Ocean where the conflict loomed, the warmth of family life acting as a beacon while Curtin made decisions that would decide the fate of the nation.

For more information about INSPIRE, contact the Writer in Residence Coordinator. 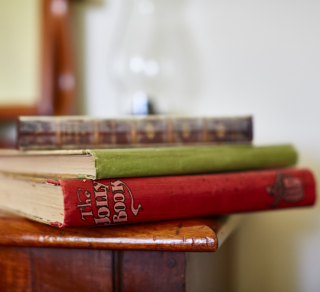