The National Trust is celebrating 50 years since Woodbridge opened to the public on 5 April 1970.

Since opening its doors, Woodbridge has become an important place for the community. Whether learning about its significant history or enjoying lunch at the café, Woodbridge provides a tranquil escape and an insight into life in the late nineteenth century.

While exploring the land of the Wadjuk Noongar people in 1827, Captain James Stirling was quick to recognise the desirability of an area in the upper reaches of the Swan River that he named Guildford. Two years later he acquired a 4,000 acre land grant which he named Woodbridge after his wife Ellen’s family home in Surrey, England. In 1880 he leased, and later sold, the property to newlyweds Charles Harper and Fanny de Burgh who built an impressive home in 1885 designed by renowned architect Francis Bird.

Early activities, originally to provide education for their children, continued after Charles died and Fanny eventually left the property in 1921. Woodbridge became associated with Guildford Grammar and impacted the evolution of secondary education in the metropolitan area. From 1942, and for the duration of WWII, it housed the residents of Fremantle’s Old Women’s Home. The Health Department closed the facility in 1964.

Before long land was being sought to provide playing fields for the adjacent public school and Woodbridge was faced with a real threat of demolition. A committee of National Trust members, recognising its significance, garnered community support for its preservation. A land swap, made possible by a Harper family descendent, Judy Hamersley, averted the demolition and Woodbridge was vested in the National Trust in 1968. Following extensive restoration it was opened to the public in 1970.

Volunteers, honorary architects and staff of the National Trust have played an important role in the care and management of Woodbridge. Their initial work defined the ‘house museum’ experience of the time. Over the last two years, funding from Lotterywest has supported detailed research, study and investigation to reposition Woodbridge. Now focussed more intently on stories that contribute to an understanding of our identity (in all its diversity) and our place in the world, Woodbridge will engage audiences with heritage and create connections to our contemporary society. 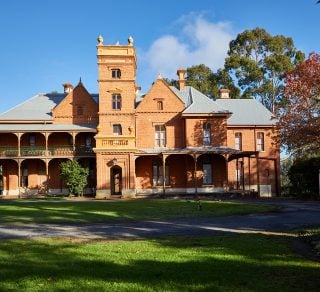 The grand home of the Harper family, nestled on the banks of the Swan River
END_OF_DOCUMENT_TOKEN_TO_BE_REPLACED
Menu