The National Trust of Australia (Victoria) has undertaken the first stage of works to restore the historic buildings at Como. This first stage of work involved urgent exterior conservation works to the mansion, kitchen/servants wing and laundry/coach house and is funded by a DELWP (Department of Environment, Land, Water and Planning)Living Heritage Grant.

These works include the following:

Paint removal from the outbuildings

Exterior paint removal from the kitchen/servants’ wing and laundry/coach house was necessary as the acrylic paint currently on the buildings is not original and accelerates the deterioration of the brickwork underneath, as moisture is not able to escape. The moisture that is trapped under the paintwork erodes the bricks and mortar. The brickwork would have originally had a lime wash finish, allowing the brickwork to breathe. The brick and mortar deterioration and previous bad repairs will need to be addressed once the paint is removed and then a lime wash finish will once again be applied.

The paint removal also provided the opportunity to reveal the history of the buildings by showing the different underlying materials. For example, the paint removal has revealed that the kitchen wing is constructed of stone, similar to the earliest part of the mansion, whereas the servants’ wing and the laundry/coach house is brick, most likely constructed at a similar time to the ballroom. The later paint finish to these buildings has concealed this story and the paint removal demonstrates how buildings and their different materials can tell us a lot about the history of a place.

Dates of the buildings

The original Como mansion was a single storey villa constructed in 1847 of rendered mudstone. In 1853 an additional storey was added along with the two-storey verandah. The Ballroom wing was added in 1874. These later additions are constructed of rendered brick.

The Kitchen Wing and Servants’ Quarters were most likely constructed around 1847 and are constructed of rendered masonry (kitchen likely to be stone the same as the mansion), face brick and what appears to be a later section on the south-east corner in timber.

The Coach House & Laundry are constructed of brick and have been painted at a later date. Their date of construction is unknown however they most likely date from a similar period to the Ballroom Wing, which was constructed in 1874. 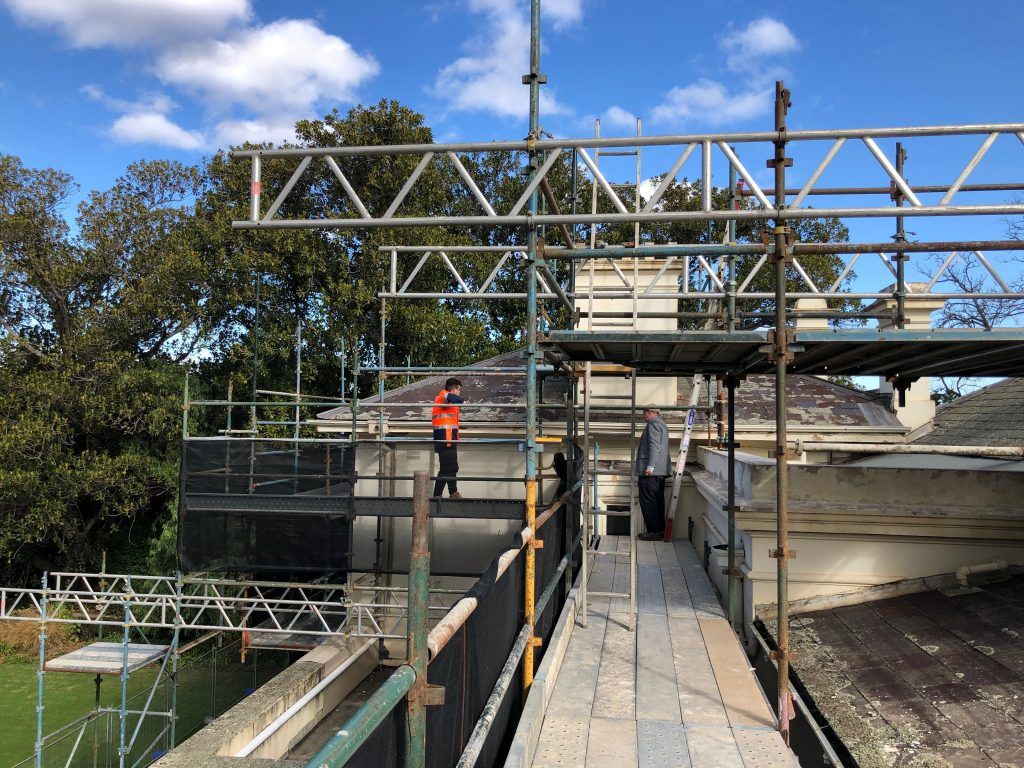 Discoveries during the project

The mudstone walls to the kitchen

Paint removal to the kitchen wing has revealed that it is constructed of mudstone, similar to the earliest part of the mansion (1847). Removal of paint and a later render from the front elevation of the kitchen has revealed a fine finished stonework. This stonework to the front (public face) of the building differs to the stonework to the rear and sides of the kitchen, which has less finely finished rubble stonework that would have only been seen by staff and residents. The more finely finished front of the kitchen also indicates what the stonework of the front elevation of the original single storey mansion would have looked like. This original section of the mansion has been rendered over to match in with the later additions, so having this kitchen wall to indicate the earlier appearance of the site is really valuable in being able to interpret the different stages of development and the different materials and finishes that have been used over time.

Gutter brackets to the coach house/laundry

Another interesting discovery was the wrought iron gutter bracket to the coach house/laundry. These gutter brackets would be the original brackets used to hold the gutter in place when the building was constructed in the mid 1800s. It is highly likely that the brackets were made on site by a blacksmith employed at the site. These gutter brackets are unusual and very sturdy as they connect back onto the rafters under the slates. Initially it was proposed to replace these gutter brackets to install a larger capacity gutter. However, after discovering this original detail that demonstrates an early construction method and in good condition, it was determined to retain these brackets in place and replace the gutter in the same size and improve roof drainage by installing additional downpipes instead.

Urns on the parapet of the mansion

In order to clean the parapet surface for application of the weathering mortar, the contractors blasted it with water which also removed paint from the decorative urns on the parapet. This revealed the decorative detail (stylised grapevine) on the urns which was previously obscured by the paint layers of paint that had been applied over time. The paint removal also revealed that the urns were most likely repurposed Victorian garden ornaments (vases) as the finials (peaks) to the urns are a different material indicating that they were added to the vases to ensure that in their new life as parapet decoration, that they would shed water. If they were retained in their vase form, water would have pooled in the cavities and they would not have survived.

Thanks to Digital Heritage Australia for the video content. 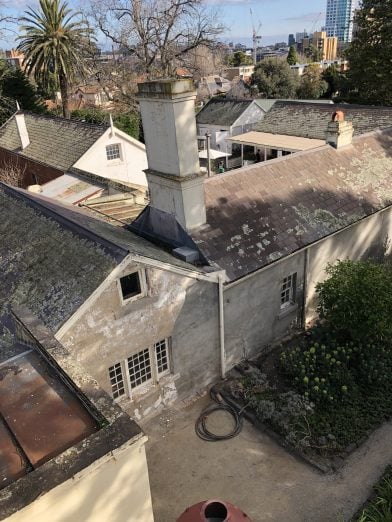 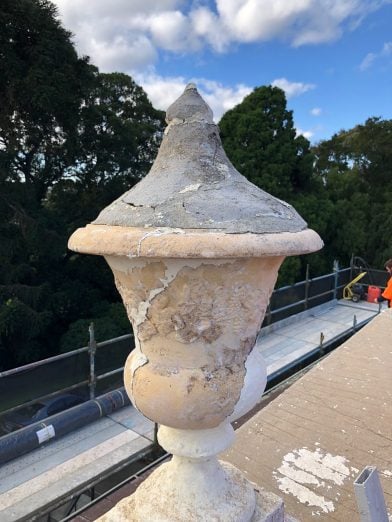 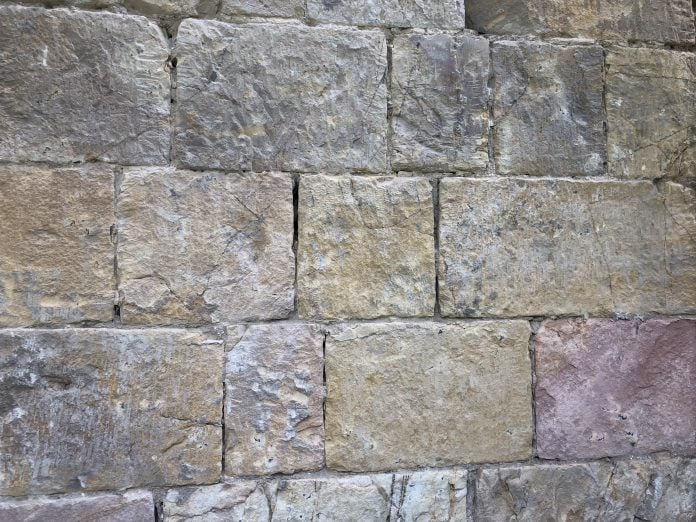 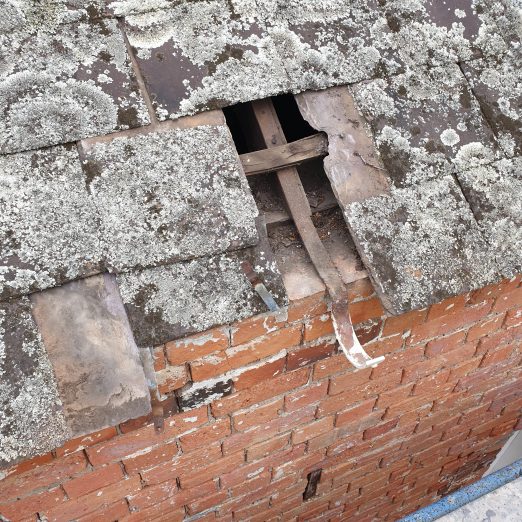