Rediscovering the Overland Telegraph Line by Earl and Wendy James

In 1984, the National Trust NT commissioned three Darwin surveyors to report on the remains of parts of the NT section of the Overland Telegraph Line between Adelaide and Darwin that opened in September 1872. In Darwin, the line joined an undersea cable to Java with connections through to England to provide the first electronic communications link between Australia and the outside world. The aim of the Trust project was to provide data for the possible creation of a heritage trail along the route. Funding was provided under a grant program for activities to commemorate Australia’s bicentenary in 1988.

Well-known local surveyor Earl James was commissioned to investigate the section from Katherine to Alice Springs. His experiences in undertaking this task, and that of his wife Wendy who accompanied him, are described in a book titled Rediscovering the Overland Telegraph Line that was published by the Historical Society of the NT in 2018. The book outlines their day to day experiences over a 3-week period in August / September 1984 to locate and document the remnants of the original line.

The line between Darwin and Adelaide had been constructed over a two-year time frame across country that was unknown and uninhabited by Europeans – an incredible achievement. Overall it required some 36,000 telegraph poles, 3,000 kilometres of a single strand of wire and 15 repeater stations to cover the distance.

Over the years the original line had been modified and parts relocated when the telephone superseded the telegraph. After microwave technology was introduced in the 1970s, and later superseded by fibre optic cable, the overland line was no longer needed.

Earl used his bush and navigation skills to track down the remains of the original line, or evidence of its existence, as in some places it was well away from the highway. He found that most of the poles through the northern section were gone – probably removed by pastoralists who found practical uses for the abandoned poles and wire. However, parts of the line were found between Mataranka and Larrimah, and long sections were intact between Tenant Creek and Alice Springs. Isolated remnants were found elsewhere.

In the book, Earl’s results of his investigations are interspersed with extracts from Wendy’s diary which adds a nice touch to the story. She comments on her experiences of life on the road, the folk they encountered, and things like the plants, wildlife and landscapes found along the way. 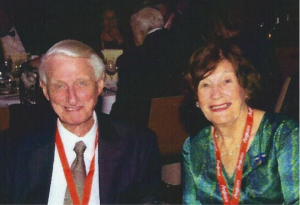 Earl’s subsequent 150-page report to the National Trust in 1985 recommended several courses of action that could lead to the preservation of Overland Telegraph relics and the creation of a heritage trail for public access. But in an epilogue in the book, he laments the fact that no action has ever been taken to achieve this objective. It is now 35 years since the investigation was carried out and he notes that from recent trips down the track very little now remains.

Rediscovering the Overland Telegraph Line is a fitting follow-up to Earl’s entertaining and informative previous book, The Spinifex is Green, in which he recounts his experiences as a bush surveyor in the NT. Both are worthy additions to the historiography of the Northern Territory and can be purchased from the Historical Society of the NT.