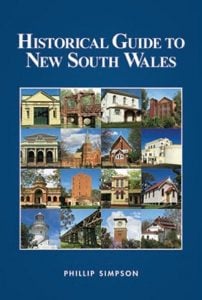 A half century ago reference librarians welcomed a publication which would answer many readers’ queries. Entitled somewhat enigmatically Gazetteer map of Australia 1:2,500,000, it was an index to place names found on the 541 map sheets in the series issued by what was then the Division of National Mapping of the Commonwealth Department of National Development.

Geographers too were pleased to see this volume: one reviewer called it an ‘object worthy of national pride’. The copy on the desk of the Telephone Information Service at the State Library of NSW was certainly appreciated, so scant were other finding aids for Australian places.

I was reminded of the 1970 publication when browsing Historical Guide to New South Wales, partly because Phillip Simpson’s two kilogram tome is in fact a true gazetteer in the tradition of the 1866 Bailliere’s New South Wales gazetteer and road guide, and partly because of its uniqueness: it contains such a vast amount of information which would otherwise take the most ardent seeker of an obscure locality much effort to uncover.

It lists 9,780 localities in all parts of New South Wales except the County of Cumberland, the reasonable rationale for this exclusion being that ‘there are many books on Sydney and its suburbs, and now the Dictionary of Sydney on the Internet’. So Simpson focuses upon the other 99.3% of New South Wales.

What makes this book so valuable is that it not only provides the precise latitude and longitude of cities, towns, villages, hamlets, settlements and localities, but presents us with an abbreviated history of each place since European settlement: when the locality was settled and by whom, when key buildings appeared and who designed and built them, what local industries were carried out, when roads, railway stations or bridges were built, and what notable events occurred there.

Nearby rivers are named, distances from nearest towns are given, as well as population figures at various stages of the place’s development or decline. Entries range from column millimetres to several pages for larger centres, each telling a story, perhaps of prosperity and growth, or tragedy and decay, or something in between.

We read of Quandary’s post office being built in 1913, burning down in 1915, then being rebuilt three times after recurring fires and finally closing in 1968. We can follow the ups and downs of Budgee Budgee, its hailstorm damage and whooping cough epidemic, a local winery opening, and its later population surge.

Grasshopper plagues, earth tremors, droughts, floods, bushfires, heatwaves, plane crashes, dust storms – such calamities are noted and dated. Where there is a graveyard, be it ever so small, the number of graves is shown, and columbaria are not forgotten. Gold reefs are named. Owners of prominent businesses over the years are identified. Alternate names of localities are listed and cross-referenced. And what is more, this remarkable book lists places which have long since disappeared, when gold, or water, or money, or luck ran out.

One marvels at the assiduity and persistence of the compiler of this work. It is of course in a sense a testament to what has occurred since European settlement, and one might have wished for some reference to the peoples occupying these places during the preceding millennia, noting the initiative, from 2020, to facilitate the inclusion of traditional placenames on items carried by Australia Post.

Still, as the compiler acknowledges, this work does not claim to be definitive or completely exhaustive, and those seeking to expand their knowledge of a place listed can refer to their favourite web browser, or the National Library’s Trove, the Australian Institute of Aboriginal and Torres Strait Islander Studies excellent website, their local Land Council, or of course their nearest reference librarian.

This is not to downplay the immense value of this compilation: Phillip Simpson must be thanked for the effort which has gone into drawing together and organising so much information from so many sources, from omnivorous reading of local histories, newspapers and directories, to painstaking site visits to hundreds of places across the State. This labour of love over thirty years has produced a goldmine for historians, genealogists, geographers, librarians, historical societies, heritage consultants, local councils and, in these COVID-afflicted times, the growing number of intrastate explorers.

Writers from the National Trust community share their stories and expertise.