BlogHomeIs it time to go for the North Sydney MLC Building?

An application has been lodged with North Sydney Council for the demolition of the North Sydney MLC Building. What is proposed is that the building be replaced with a new development designed by the original architects. David Burdon writes on why the National Trust maintains that the MLC Building has an important part to play in the history and heritage of North Sydney.

Completed in 1956 to a design by leading architects Bates Smart and McCutcheon, the shining North Sydney MLC was opened with much fanfare by the then Prime Minister of Australia, Robert Menzies. Standing opposite the 1889 Post Office, Court House and Police Station designed by NSW Colonial Architect James Barnet in (itself emblematic of the growth of North Sydney in the mid-nineteenth century), it was clear to see that this was the pivotal moment in which North Sydney began to evolve into the thriving CBD it is today. 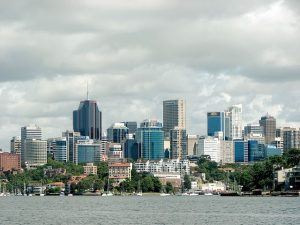 With a frontage over 100 metres long, the North Sydney MLC Building was the largest office building in Australia at the time it was built and showcased the latest international technology in its construction through the use of an extensive glass curtain wall system inspired by European and American design trends. The building was one of a series of other buildings across Australia for the same clients and by the same architects, including new MLC buildings in Brisbane, Adelaide, Newcastle, Perth and Canberra.
The North Sydney MLC Building is listed as a heritage item in the North Sydney Local Environment Plan, and has been recommended for State Heritage Listing by the Heritage Council of NSW.
The National Trust has long identified the importance of the structure and indeed first discussed its listing at a meeting of its Historic Buildings Committee in 1987. An award-winning refurbishment of the building in 2001 by Bligh Voller Nield Architects involved dramatic yet well-considered changes to the interior of the building that included the insertion of a ‘vertical street’ in the form of an 11-storey staircase linking office environments. This change was described by Professor Philip Goad at the time as: “one of the most profound shifts in the history of postwar Australian office design.” This has proved to be the case, and anyone who has visited a newly constructed or refurbished corporate office now views the interlinking stair as standard practice.
So here we have a historically significant, large office building that has already proven its ability to be sympathetically remodelled to suit modern office requirements, which could continue to fulfil the role for which it was designed.

In a March 2012 review of the building by the original architects in the Bates Smart Journal, it was stated that the aluminium framed curtain wall of the MLC Building in North Sydney ‘represents the highest level of innovation in construction technology of the time, which was coupled with the emerging modern rationalised open-plan office environment’.
Bates Smart have been responsible for numerous upgrades and refurbishments to the MLC Building in recent times, and are responsible for the good condition it remains in today.
In 2019 when Bates Smart were selected to design a new commercial tower above the new Victoria Cross Metro Station, much was made of the fact that this new design would sit immediately adjacent to the heritage-listed MLC building designed by the same architectural firm. The well-prepared Heritage Impact Statement for that development (Issue E, July 2019) prepared by OCP Architects clearly notes that ‘just as the MLC revolutionised workplace in North Sydney in 1957 with large horizontally connected workplaces, Victoria Cross seeks to revolutionise workplace in North Sydney with large, vertically connected villages… this vertical emphasis, which is expressed in the cantilevered forms of the western façade fronting Miller Street, creates a dialogue between the MLC Building and Vitoria Cross Over Station Development and adds to the interpretive value to the MLC Building within the North Sydney CBD’. In other words, the new development associated with Victoria Cross Metro has been designed to respond to the existing setting – and specifically the North Sydney MLC Building.

So, is replacing the MLC Building really the only option?

No-one is denying that the new building that is being proposed is not a good design from a highly respected architectural practice – in fact there are many existing buildings in North Sydney that could happily make way for such an exciting replacement! The point here is that the exciting cities of the world always benefit from being able to see the layers of their history and development, and that is why it takes entirely new cities such a long time to develop a true sense of place.
Just as an artist makes another brushstroke to build up their canvas, the thing with layers is that you have to add them one on top of the other to build an interesting picture with depth of meaning.
This particular part of North Sydney (with its old bank and Post Office, MLC centre, new Microsoft headquarters and proposed Metro station) is one of those spots where the dynamic pattern of development is apparent. Let’s keep it interesting by adding another layer, not removing one.

National Trust members play an active role in the conservation of Australia's built and natural heritage.

END_OF_DOCUMENT_TOKEN_TO_BE_REPLACED

Without the generosity of Australians who care for and value our heritage, the history and culture we treasure would be lost.