In an exciting new collaboration, the National Trust has partnered with Western Sydney University to develop four digital elements for the new exhibition at Old Government House, Enquiring Minds: Exploration and discovery in colonial NSW.

The project: Co-designing digitally enhanced cultural heritage experiences, audience and postgraduate student engagement, was designed to enhance the visitor experience of the exhibition, and to look at how digital elements could be incorporated into National Trust property presentation.

Two works were developed to assist in the interpretation of the Brisbane Star Catalogue. The catalogue was compiled from data collected over four years of observation at the Parramatta Observatory by Governor Brisbane and his astronomers between 1822 and 1825. It was published in 1835 as A Catalogue of 7385 stars, chiefly in the Southern Hemisphere Prepared from observations made at the Observatory at Parramatta, New South Wales.

National Trust NSW is fortunate to hold a copy of the star catalogue in our collection, which features in the exhibition. The original handwritten data for the star observations is now held in the Library and Archives of the Royal Astronomical Society in London, who supplied digital files of some pages of the books.

A video work, Celestial Navigation, combines video footage and computer animation to allow visitors to place the now demolished observatory within the Parramatta Park landscape, see the internal workings of the featured astronomical instruments, and understand how the star observations and finished catalogue relate to the stars above. 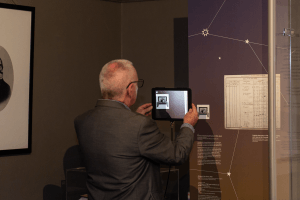 An augmented reality piece enables visitors to interact with the star catalogue via an ipad. The AR is placed next to the catalogue, and links the printed material to the raw observing data. Further prompts guide the visitor to turn the ipad upwards to show the corresponding stars in the sky.

Incorporating Indigenous astronomy into the exhition was also a high priority. With little original material from the Parramatta or Sydney area available, as so many artefacts and stories have been lost through the impacts of colonisation, it was decided to film an Indigenous star story dance, coreographed and performed by the Jannawi Dance Clan.

The dance tells the Dharug story of Kurrobori, the Spirit Woman who comes from the morning star beyond the rising sun. She caused This Land to rise up from the water that covered it, plants to grow to give her food, trees to grow to give her shelter in which to rest, and the flowers to bloom on the plants. Filming took place in both a studio and at a traditional dance circle at Shaws Creek, on the Lands of the Boorooberongal Clan, Dharug Nation. 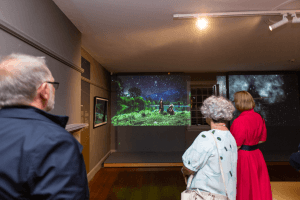 The fourth digital element is a touch screen interactive that allows visitors to explore John Oxley’s journeys inland to the Lachlan River in 1817 and the Macquarie River in 1818. Visitors are able to read selected entries from Oxley’s journals, illustrated by contemporaneous images, giving a fascinating insight into details of the expedition, the recently colonised landscape and the First Nations people encountered. The journal entries are geo-located onto a digitised version of Oxley’s beautiful ‘Chart of Part of the Interior of New South Wales’.

These digital enhanced experiences are an exciting new area of audience engagement for the National Trust. A survey of our visitors about their use of digital media in exhibitions will run in tandem with the exhibition to gauge the success of these interactives.