Watiparinga is a restored woodland of Grey Box (Eucalyptus microcarpa) trees over a grassy understorey.

Watiparinga is a restored woodland of Grey Box (Eucalyptus microcarpa) trees over a grassy understorey. The vegetation found within the reserve is typical of much of the grassy woodlands of the plains and foothills of Adelaide from the Willunga Scarp to the northern foothills of Tea Tree Gully.

The reserve is located in the Hills Face Zone and provides valuable open space. There are steep rugged hillsides and spectacular rock formations with panoramic views over Adelaide and the coastline. The main Adelaide to Melbourne railway line passes through the reserve and the original single-track railway tunnel, which was in use from 1883 to 1919, is still present.

Watiparinga shows how careful land management has restored a grassy woodland from a grazed farming property to a vegetation community in a condition as near as possible to that which existed prior to European settlement.

Over 170 indigenous plant species are now present within the reserve, 50 of which are of State or regional significance. There have also been 57 indigenous bird species sighted and 7 of these are rated as uncommon, rare or vulnerable within the Mount Lofty Ranges.

Watiparinga was one of the first properties donated to NTSA and contains the first National Trust plaque in South Australia unveiled by the then Governor Sir Robert George. The site also contains some historic plantings of horticultural interest, a commemorative plaque in memory of the donor Alison Ashby, Wattiparringga Creek and shelter caves that are likely to have been used by the aboriginal people.

The land was donated to the National Trust of South Australia in 1957 by Miss Alison Ashby MBE and is currently managed by the Watiparinga Management Committee with support from the Natural Heritage Manager.

The best time to visit Watiparinga Reserve is during spring and early summer. Mountain bikes  are not permitted in this Reserve.

**Please note: Dogs are allowed on-leash in this reserve

The Reserve can be entered from:
• The end of Glouscester Ave, opposite Mitcham Council Reserve, Belair
• Eurilpa Street, Dale Road and Baeckia Place in Eden Hills
• Shephards Hill CP via the Viaduct Track

The site is open daily 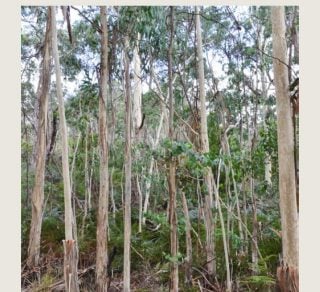