What we know as The Rocks in Sydney has a much earlier name: Tallawoladah. This was the name given this area, of what we now know as Sydney, by the original custodians of the land – the Cadigal people. The rocky headland to the west of Sydney Cove (known as Warrane), had huge sandstone outcrops, with forest of angophora, blackbutt, red bloodwood and Sydney peppermint.

This beautiful area of Sydney is treasured by its resident community, the people of Sydney today, and visitors to Australia from across the world. The National Trust – in my time there – has played an instrumental role in ensuring this historical treasure is protected.

Why The Rocks Matters

The Rocks is so important to both locals and international tourists because it is the historic early town of Sydney. Just as Paris has Montmartre, Warsaw has Cracow and Prague has its Old Town – Sydney has The Rocks.

I enjoy noticing the sometimes subtle but distinctive variation in architecture styles and construction periods from the early colonial sandstone buildings such as the Sydney Observatory and the Hero of Waterloo Hotel to the huge brick warehouses, the early Victorian rows of terrace buildings and the larger mansions that you can find above Dalgety Road. Even more interesting is how The Rocks (including Dawes Point, Walsh Bay and Millers Point) nestle under the approaches to the Sydney Harbour Bridge and so many photos and paintings have ‘the coathanger’s’ huge infrastructure as a dominant backdrop.

Underpinning the landscape is the maritime setting of Sydney Harbour, Darling Harbour and Sydney Cove and the wharves of Walsh Bay. These waterways and structures tell the story of life in the harbour city and its evolving industries and work life, all of which was so important in shaping the development of The Rocks over the first 200 years of English Colonial settlement. 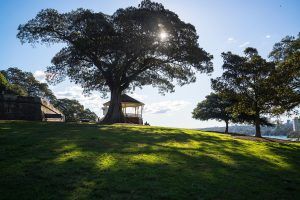 View from a Hill

Observatory Hill is one of Sydney’s finest parks. This picturesque open green space encircles the Sydney Observatory, constructed from 1857 with, at its southern extremity the 1815 National Trust Centre – which was originally constructed as a military hospital.

Observatory Hill was formally known as Windmill Hill, named after the windmills constructed in the early days of settlement. The earliest of these was the windmill constructed by Irish convict John Davis in 1796. 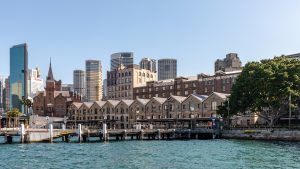 Living in The Rocks

The Rocks has a welcoming commercial, restaurant and entertainment scene with its many historic pubs, a number vying to be the earliest in Australia, its theatres at Walsh Bay and its street markets in Argyle Street.

Central to The Rocks is the distinctive Sirius Building, specifically designed for public housing and one of the most important monuments to the Green Bans movement led by Jack Mundey. With strong support from the local community and architecture enthusiasts, it appears that this building may have been saved and should be sensitively renovated. The National Trust was the first and only body to list this building on its register. Our nomination of the building for the State Heritage Register, although supported by the Heritage Council of NSW, was rejected by the NSW Government. 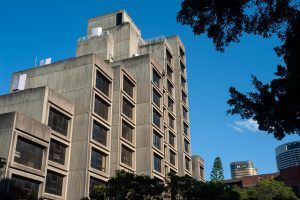 Another battle for the National Trust was the advocacy campaign to save the former Maritime Services Building (now the Museum of Contemporary Art) at Circular Quay from an unsympathetic redevelopment.

Beneath the Bradfield Highway approaches to the Sydney Harbour Bridge can be found the archaeological remains of the former Dawes Point Battery built and modified from 1791 to 1925. The battery’s first guns came from HMS Sirius, which had wrecked at Norfolk Island. Fear of a Spanish attack motivated the construction of the battery. In 1810, Napoleon ordered the French forces in Mauritius to launch an attack on Sydney but the Royal Navy captured the island, preventing the attack.

It is this rich history, its architectural diversity, its maritime setting and its buzzing social life that makes The Rocks such an appealing destination treasured by so many people.

National Trust members play an active role in the conservation of Australia's built and natural heritage.

END_OF_DOCUMENT_TOKEN_TO_BE_REPLACED

Without the generosity of Australians who care for and value our heritage, the history and culture we treasure would be lost.