Andreana Kennedy is the Conservation Manager of the National Trust (NSW). She provides a background to the planning decision on the Warragamba Dam and why it’s a poor outcome for the natural heritage of the Blue Mountains World Heritage site.

In June, the NSW Government’s plan to raise the Warragamba dam wall grew by 3m. It is now a proposal to increase the dam wall height by 17 metres, originally 14 metres was proposed, to reduce the risk of flooding in the Hawkesbury-Nepean Valley. The additional three metres is to make the proposal resilient to change as a result of global warming.

The plan is that during high rainfall events flood waters will be captured and will temporarily inundate around 5,000 hectares of the Burragorang Valley. The temporary inundation will have significant impacts on a declared World Heritage Property, a National Heritage place and listed threatened species and communities. As such, the project requires approval at both the federal and state levels. 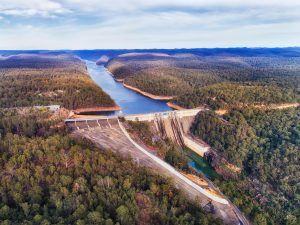 Why is the Blue Mountains area of natural heritage significance?

The Greater Blue Mountains inclusion on the World Heritage List in 2000 was acknowledgment of the area’s significant natural values. The area was listed as it supports outstanding biodiversity, with around 100 eucalypt species occurring in an extraordinarily diverse area rich in natural and cultural values. This diversity is a reflection of the evolution of Eucalypts and their adaptation to a variety of habitats. When included on the World Heritage List, the area supported approximately 152 families, 484 genera and 1,500 plant species, and for vertebrate animals, the unique habitat supported some 52 mammal, 63 reptile, more than 30 frog and approximately 256 bird species.

What will be lost?

There are 80 known species of threatened flora and fauna at and upstream of Warragamba Dam. The inundation of national parkland and part of the Greater Blue Mountains World Heritage Area, for at least two weeks at a time, will have significant detrimental impacts on threatened species. This includes two critically endangered ecological communities being the White Box-Yellow Box-Blakely’s Red Gum Grassy Woodland and Derived Native Grassland, and the Shale Sandstone Transition Forest of the Sydney Basin Bioregion. Threatened animals that will be impacted include the endangered Macquarie perch and the critically endangered regent honeyeater. Fewer than 400 mature regent honeyeaters remain in the wild. It is a species on the brink of extinction.

What you can do to protect the Blue Mountains World Heritage Area?

The completed Environmental Impact Statement and the State Significant Infrastructure development application for raising the dam wall are expected to be on public exhibition later this year or early in 2021.

The National Trust strongly opposes the plans to raise the dam and will continue to campaign for the protection of the heritage values of the Blue Mountains.