BlogHomeRemembering Betty Mason and the heritage battle for Annandale

During the 1960s and 1970s, Annandale was at serious risk of being drastically affected by major planning proposals and developments. If it wasn’t for the tireless work of Betty Mason and the support of the local community, our special heritage places could have been lost forever.

Betty Mason was a petite gentle-looking woman with a fierce devotion to defend the heritage listed buildings in and around Annandale, New South Wales.

In the 1960s, the areas of Annandale and Glebe were to be severely impacted by the structure of a proposed new freeway. Other likeminded people in Annandale, using the model of the Balmain Association, set up an association to protect the buildings of Annandale and Betty was the founding secretary of the new Annandale Association in 1969. The association, along with the Glebe Society, published the projected plans. A public outcry, black bans, and fierce protestations against the freeway succeeded in saving impacts on Glebe and Annandale.

Not long after this, Betty and the members of the group compiled a detailed research survey of individual buildings in Annandale.

Betty became very involved in visiting heritage sites and protecting them. She started a long association with the National Trust from April 1970 when the President of the National Trust, Jeffrey Miles, recognised a kindred spirit. At the time, Betty was taking on Leichhardt Council over the proposed demolition of the Witches Houses. The National Trust Junior Group held their first event with the Annandale Association in 1972.

In 1976, the Leichardt Local (28 September 1976) reported fire damage to 264 Johnston Street. Betty Mason “who lives around the corner” it was reported, saw smoke coming from the roof. It was a suspected arson attack on the heritage property that became a theme over the subsequent years. Betty and the Annandale Association were later reported (Sydney Morning Herald, 8 October 1976) putting out more fires at 270 Johnston Street, Oybin House. 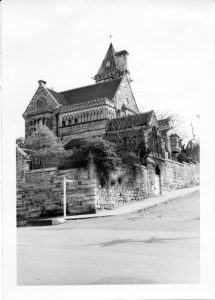 Annandale is an important area with remarkable history and heritage sites. Significant places include:

These buildings were listed by the New South Wales National Trust at that time and continue to be protected today by heritage listings. Betty continued to promote and protect the wealth of heritage listed buildings in the area until she was well into her final years. She continued to keep the National Trust aware of any possible threats to her beloved Annandale. Betty Mason passed away over the second weekend of April aged 95.  She is fondly remembered by the National Trust.

Written in memory of Betty Mason by James Bosanquet and Julie Blyth. Many thanks to Cameron Wadick for his excellent research.

James is the Archives & Library Manager at the National Trust (NSW). James has an interest in Australian history, heritage and local, endemic flora.