Chris Tobin started volunteering with the National Trust (NSW) in 2015. Since then, Chris has contributed significantly to the work of Woodford Academy. Here is his story.

Darug Elder Chris Tobin may be a familiar sight to visitors at the Woodford Academy. On the monthly Open Day, Chris is there to welcome visitors and provide a meaningful connection to the site’s pre-colonial past.

Better known as Uncle Chris, Chris is a researcher, educator and artist. He answered the call when the National Trust reached out to the Aboriginal community in 2015, seeking to strengthen relationships. “In the course of those talks, we were talking about, well, a smoking ceremony needed because they’ve still got spirit activity up at that place and that led to other interactions with them.”

A small team of volunteers came together to establish a place of understanding at Woodford Academy. “Out of this new collaboration came the dedicated Aboriginal Interpretative Room, transforming the former science room in the Dairy wing into a space exploring the region’s indigenous art, culture and history. Chris’ first idea was a large-scale mural. “But it seems the National Trust is a bit particular about the walls.”

The compromise was a pair of wall-sized canvas paintings, which Chris worked on with his daughter. The paintings depict stories of Country, motifs from Darug rock art and dreamtime beliefs of the nearby Gandangara people. They also reference the more recent history of the Frontier Wars.

“And that was a lovely thing to be able to do too,” says Chris. “Because it’s a prickly or tricky, difficult, uncomfortable subject for a lot of people and I do want people to know that this went on, because a lot of people know very little about the culture and the history of the country, and I think they often don’t think if they’re living in Sydney that there was anything that happened there.” 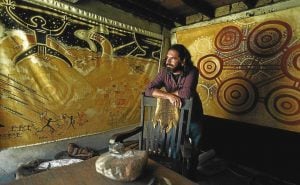 Chris’ work with Woodford Academy has also given locals a place to pool and enrich their knowledge of Aboriginal sites and snippets of history. “So it becomes a place of sharing and a source of new information because I wouldn’t meet up with those people otherwise.”

Chris is pleased that popular sentiment is waking up to the importance of Aboriginal culture, but notes the difficulty of getting enough volunteers to share the work. He used to worry about the torch being passed on to a younger generation, but remains optimistic. “I’m actually believing that the good work is going to be in how a lot of our cultural messages are already starting to be picked up in the general mainstream culture.”

He refers to traditional values that prioritise community and respect for the environment.

“I love pointing out that we didn’t have homeless people till two hundred years ago. Unless you’re a criminal and got kicked out of your clan country. And that, even just a message like that for some people can be life-changing.”

Woodford Academy acknowledges and respects the Darug and Gundungurra people as the traditional custodians of this land.

If you’re interested in volunteering at the National Trust (NSW), please get in touch.

Alethea is a National Trust (NSW) volunteer who loves history and storytelling.