BlogHomeMake Sure Manyana is Safe

Andreana Kennedy is the Conservation Manager at the National Trust (NSW). She writes here on the fight to save what is left of the Manyana forest.

A group of Manyana locals have been fighting to save 20 hectares of unburnt native forest, an important refuge for plants and animals impacted by the recent bushfires.

It has been estimated 80 per cent of the land area of the Shoalhaven was burnt or impacted by the Black Summer fires, including much of the Conjola National Park that surrounds the coastal village of Manyana. The ferocity and intensity of the devastating fires that tore through forested regions was described in the Final Report of the NSW Bushfire Inquiry as ‘on a scale that we have not seen in Australia in recorded history’.

The NSW Fire and the Environment 2019-20 Summary is an analysis and report on the effects of the summer bushfires on NSW’s biodiversity. It found ‘events like the bushfires over spring and summer 2019–20 have altered large areas of habitat for species and ecosystems in the State. In some places where bushfires were very extensive, there is a scarcity of unburnt areas to provide refuge for wildlife as burnt areas recover’. This sentiment was echoed by Federal Environment Minister, Sussan Ley, who noted: “the bushfires have created a greater need for assessment than would otherwise happen” (ABC Illawarra, 17 August 2020). 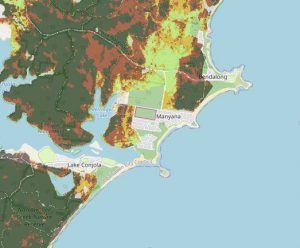 Above: DPIE’s Google Earth Engine Burnt Area Map is an estimate of where the summer wildfires in NSW have affected vegetation. The red and the black represent a burnt area class of high and very high respectively, Manyana development site outlined in pink.

The Development Proposal for Manyana

One of the few remaining green vestiges in the Manyana area includes 20.4 hectares of bushland earmarked for redevelopment. The land, owned by Ozy Homes, has a 2008 development consent, assessed under Part 3a of the Environmental Planning and Assessment Act, approved by the then NSW Minister for Planning Frank Sartor. The approved plan, marketed as Manyana Beach Estate, is for the subdivision of the land into 182 residential lots, including associated infrastructure, a playground, bushland reserve and other open space.

What is at risk at Manyana?

The proposal will remove approximately 17.18 hectares of vegetation, being 84 per cent clearance of the total site. This native forest is described in the Environment Protection and Biodiversity Conservation Act 1999 (EPBC Act) Manyana referral as comprising of ‘5.39 ha of Bangalay Moist Woodland Open Forest and 10.79 ha of Northern Coastal Sands Shrub/Fern Forest and 1 ha of disturbed/cleared area’. 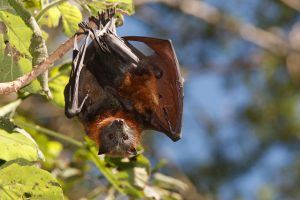 Vulnerable species including the grey-headed flying fox and greater glider have been observed on the site. Grey-headed Flying fox were seen in small numbers foraging on the site during nocturnal surveys conducted over the last two years (Ecoplanning, 2020). The survey consultants described the site as containing foraging habitat from flowering trees including eucalypts and paperbarks, and the fruits of Lilly Pilly (Acmena smithii) found in the Bangalay Moist Woodland/ Open Forest. Greater gliders were observed at the site in a 2005 flora and fauna assessment (BES, 2006).

The site is also seasonal habitat for the migratory Black-faced Monarch. The bird was observed onsite, including evidence of the presence of a breeding pair in the 2005 survey by BES. The migratory Rufous Fantail were also observed in this survey. As a result, the 2008 conditions of approval specify that clearing of Bangalay Moist Woodland/Open Forest cannot occur for stages two, three or four of the development between the start of October and end of February to minimise potential impacts on these migratory birds.

Why is the federal Department of the Environment assessing the proposal for Manyana?

Ozy Homes referred the Manyana Beach Estate Development for review to the Minister for Environment Sussan Ley back in June, to determine whether the proposal would have a significant impact on a matter of national environmental significance.

The review found the proposal would require assessment and approval under the EPBC Act citing direct or indirect impacts on threatened species and communities. Sussan Ley said the assessment would specifically assess the impact on the critical habitat of the threatened Grey-headed Flying-fox and potential habitat of the Greater Glider.

The Minister determined the relevant impacts of the proposal would be assessed against preliminary documentation. This means that an Environmental Impact Statement is not required. Instead, it is merely a review of material provided by the proponent, advice from the department, appropriate investigations and public comments submitted on the referral.

A decision on the fate of the Manyana site is expected before the end of the year.