BlogHomeHeritage is at Risk in the Blue Mountains

I have the very good fortune to live in the majestic Blue Mountains.

The Blue Mountains comprises a chain of historic villages that stretch along a narrow sandstone plateaux in the midst of seven National Parks, which contain globally significant biodiversity. This area is a unique part of New South Wales and Australia. In fact, it is unique around the world and that is why the entire Blue Mountains Local Government Area falls within the bounds of a 1,032,649 hectare World Heritage listed area. It is one of only two such urban areas in the world.

However, the Blue Mountains’ rich natural, built and cultural heritage is under threat.

How the Blue Mountains is under threat

By far the most immediate and far reaching threat is that posed by the NSW Government’s proposal to raise the walls of Warragamba Dam as a flood mitigation measure.

This has the potential to inundate thousands of hectares of National Parks, destroying sensitive ecosystems and culturally important indigenous sites. Such action also endangers this region’s World Heritage status.

Elsewhere, plans by Transport for NSW to make the Great Western Highway a dual carriageway between Katoomba and Lithgow threaten significant heritage sites at Pulpit Hill and Blackheath. Similarly, proposals by the National Parks and Wildlife Service to ‘upgrade’ two popular escarpment lookouts has the potential to adversely impact important heritage structures and undermine efforts to foster environmentally sustainable tourism. Recent advice from Sydney Trains is equally concerning, with confirmation of that agency’s intention to ‘decommission’ Woodford’s unique Memorial Park footbridge and replace it with a commemorative plaque.

One such scheme is for a ‘crocodile park‘ and an 80-room hotel to be built on the site of a hanging swamp in Wentworth Falls.

This situation will be exacerbated by the NSW Government’s decision to extend the Housing Density Code to the Blue Mountains, thus removing local controls that currently limit the footprint of development in response to the environmental setting. Importantly, under the Code, there is no provision for Council or community consultation on a development, irrespective of its impact on the environmental or heritage values of the location. 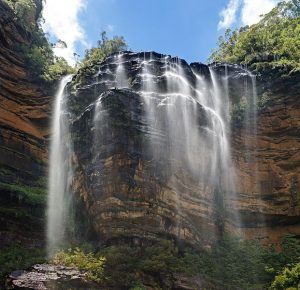 Even where local heritage protections exist in the Blue Mountains, private developers are seeking to nullify their effect. A good example is a proposal to build a modern, four-star hotel in the backyard of the heritage listed property, ‘Calgoa’, in Leura. While a local planning panel, cognisant of community objections, rejected the first development application for this project, a second application has been lodged with Council.

The approach to ‘Calgoa’ follows a familiar pattern of proponents of inappropriate development seeking to lodge further applications or court appeals following an initial adverse outcome. Further, some applicants seek to have their project declared a development of ‘state significance’ in order that it may be solely determined by the NSW Government Planning Minister in terms of its economic benefits.

The activity outlined above is eroding the heritage character of many of our Blue Mountains villages. Regrettably, this situation is being aided by laws that give the local Council inadequate powers to require private owners to properly maintain heritage buildings. As a consequence, several culturally significant Blue Mountains buildings are at risk of ‘demolition by neglect’.

Hope for the Blue Mountains’ heritage

While what I have described might paint a gloomy picture, the situation is not yet irretrievable. The Blue Mountains Branch of the National Trust has been active in all of the matters I have cited above, and our robust advocacy for heritage conservation is making a difference.

We remain confident that with support from across the Trust’s membership and supporter base, these efforts can only be enhanced. 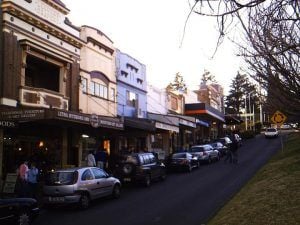