The 12th of March 2021 marks the 100th birthday for Central Station’s Clock Tower – certainly the grandest of all the station clocks in Australia and a Sydney landmark for the past century. Since 1921, the 75m tall sandstone tower has stood proudly against the blue sky at the NW corner of the station precinct, visible to travelers and locals alike.

The National Trust wish it a Happy Birthday!

Central Station is unique as a major sandstone public building, reflecting the status of this major new piece of infrastructure. The building was, somewhat controversially, built as an elevated terminus, necessitating the need for a large building presence to the newly-formed Eddy Avenue. The railway was originally planned to extend to (and resume much of) Hyde Park, but the current location was eventually agreed upon and construction began in 1901. When the station was opened in 1906 it was still incomplete, and it was not until 1921 that the Clock Tower was built.

Although noting some of the deficiencies in the design of the station (specifically, turning Devonshire Street into a “miserable pedestrian tunnel”), the prominent Sydney Architects, Philip Thalis and Peter John Cantrill, highlight in their magnificent publication Public Sydney (co-published by the Historic House trust and the University of NSW in 2013) that the clock tower was “skillfully placed to align to many nearby streets including Broadway, Wentworth Avenue, and Pitt, Valentine, Albion and Foveaux Streets.” This is key to its landmark status.

The heritage listing for Central Station notes that it is a major terminal by world standards, comparable with late Victorian and Edwardian metropolitan stations in Europe, Great Britain and North America. Not only was it a major planned piece of urban design aimed at improving Sydney, but it was “the only major building of this period in Sydney where the urban setting was consciously designed to complement, and provide views of the main structure.”

The heritage listing’s description specifically focuses upon the visual prominence of the clock tower:

“The open space of the rail yards adds to the experience of arrival to the city from the north and south by opening up vistas to the imposing Sydney Terminal with its landmark tower. This open space permits the imposing Terminus and its Tower to be visible when viewed from a distance much as it was intended when originally built. The terminus and its approaches define formal urban spaces in the city fabric.”

Despite its importance however, very few people seem to be aware of the various proposals for what the NSW Government has termed the Central Precinct. In the October 2019 Draft Strategic Vision for the Central Precinct, it was noted that soon after it was built, the sandstone clock tower “became a landmark in the local area and was known as the ‘working man’s watch’.” This document stated that new development would be done in such a way as “to protect the heritage significance of the precinct and surrounding areas.” It even included photographs of the amazing Coal Drops Yard at London’s King’s Cross station as a precedent, and an image of the St Pancras Station tower sitting proudly against a blue sky background when seen from Pancras Plaza. This is very different from the reality which is currently on display at the large physical planning model at Sydney Town Hall. 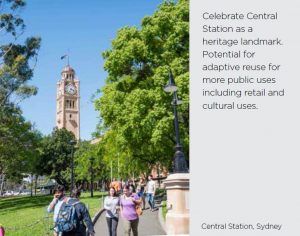 The promise… image and caption from the ‘Central Precinct Draft Strategic Vision’ prepared by Transport for NSW. 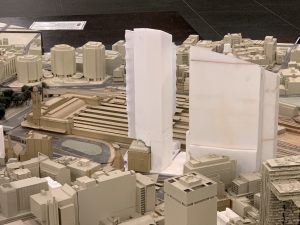 The significance of Central Station and the prominence of its clock tower is under immediate threat by a series of planning proposals and approved developments. With almost no consideration given to what these schemes will mean to the heritage significance of one of the world’s great railway stations (and certainly the grandest one that will ever be built in Australia), various towers will reduce the visual prominence of the Central Station Clock Tower, blocking views of it from key locations and totally building out the clear blue sky background this Sydney landmark has always enjoyed from Belmore Park.

Included in the Heritage Impact Statement for the proposed 211m tall Atlassian Building, approved by the NSW Government to be built on top of the historic Former Inwards Parcels Shed, is the visual impact assessment of this proposed building. The impact on the clock tower is plain to see, despite the conclusion of the heritage assessment that “the location of the proposed development, including its setbacks and spatial relationships with neighbouring heritage items does not negatively affect the visual prominence or landmark significance of the Clock Tower or create any significant visual impacts on the view corridors along Broadway, Pitt and George Streets to Central Station.”

We present some of those views, and will let you be the judge. The next 100 years promise to be quite different… 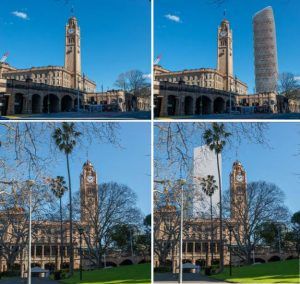