HomeTours and Multimedia – Running on Time 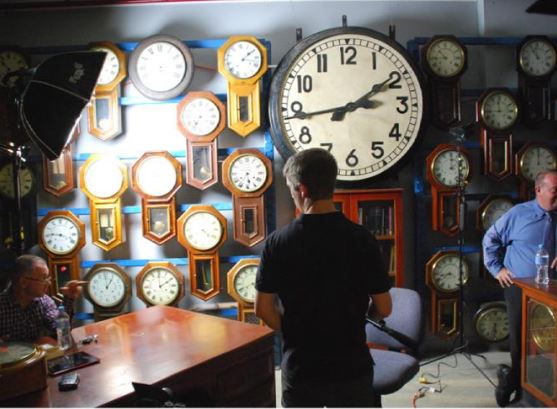 Tours and Multimedia – Running on Time

Engaging with audiences and the community is a key part of Sydney Trains aim to share the history of ‘rail heritage’ with the customer. An example of this is the ‘Running on Time’ project completed in 2016 which includes multimedia resources and ‘behind the scenes’ tours of Central Station.

Conserving rail heritage is not just about maintaining the historic rail infrastructure, but also capturing the stories of the people behind the railways. Sydney Trains and its predecessor railway organisations also have a rich history suitable for oral history collection. In addition, the high volume of life-long staff retiring and the modernising of older technological systems and equipment provides a short window of opportunity to capture valuable intangible rail information before it is lost forever.

‘Running on Time’ was completed throughout 2015-16 and had the aim of documenting the history and development of a standard system of timekeeping in the NSW Railways. The project was completed as part of Sydney Trains’ overall heritage asset management program, which includes a commitment to ‘continue programs to further improve heritage management across the organisation and share our history with the customer’.

This project captured the evolution and introduction of ‘railway time’, and the physical manifestation of a standard timekeeping system via the various clocks, watches and recording devices that connected the rail system across the state. The technological changes in timekeeping systems and the role of time in both safe working of trains and passenger information services across the network were integral to an expanding railway network. The project also highlights the history of collecting railway clocks and their wider interest as collectable antiques.

The aim of the interactive project was to make information regarding this important historic theme accessible to audiences in a range of methods including:

The ‘Running on Time’ publication, film and resources are available on the website.

For preparation of the report and film, historical research was undertaken by historian Mark Dunn at the Australian Railway Historical Society and Sydney Trains heritage archives to source historic photos and video footage. A series of interviews were then conducted with railway staff and NSW clock-makers who service the historic clocks, maintain the collection and run the current systems of time information across the network.

As part of the project, the collection of railway clocks managed by Sydney Trains was audited and a storage facility at Central Station was upgraded to allow visitor access to visit the collection – for the first time bringing the public back-of-house to explain how Sydney Trains manages its movable heritage collections.

The tours were advertised through Sydney Trains website and were free to any member of the public. Within 24 hours all available tour slots were taken, showing a keen interest to take part in the tours. As part of heritage week in 2016 Sydney Trains heritage team ran free public tours of Central’s clock tower and clock room. As an introduction to the tours, customers were shown the ‘Running on Time’ film – as an introduction to the history of the station and the railways. Participants then climbed to the top of Central’s iconic clock tower (over 200 steps each way), and then made their way down via Centrals magnificent marble staircases, to the clock storerooms and a display of historic railway clocks.

This was the first time the Sydney Trains clock collection was open to the public and people on the tours got a glimpse of how important timekeeping has been, and continues to be, for the railways. The room included presenting examples of different railway clocks from different eras, as well as providing safe and secure storage for this valuable collection of movable heritage items.

The purpose behind the project was to conserve heritage assets not just in physical form, but also to ensure that the stories of the staff behind the scenes managing our heritage assets are also recorded as part of our history. The project promotes inclusion and participation in all parts of a large organisation with extensive heritage portfolio and cultural history to advocate heritage conservation practices. The project has been promoted internally through newsletters, staff screenings of the film and through information available for download on the website and intranet.

A summary of customer feedback was received after the tours and will be used for tailoring future tours at Central Station, however the majority of customer feedback rated as ‘very good’. Many customers on the first tours came from as far away as Cowra and Lithgow, and the response was overwhelmingly positive with many asking “when will the next tours be?”

Worked on the project:
Sydney Trains and Art of Multimedia

“This tour beautifully captures the voices of the people behind the railways and makes great use of the moveable heritage collection of clocks that Sydney Trains has. What is it about clocks that captures the imagination?”