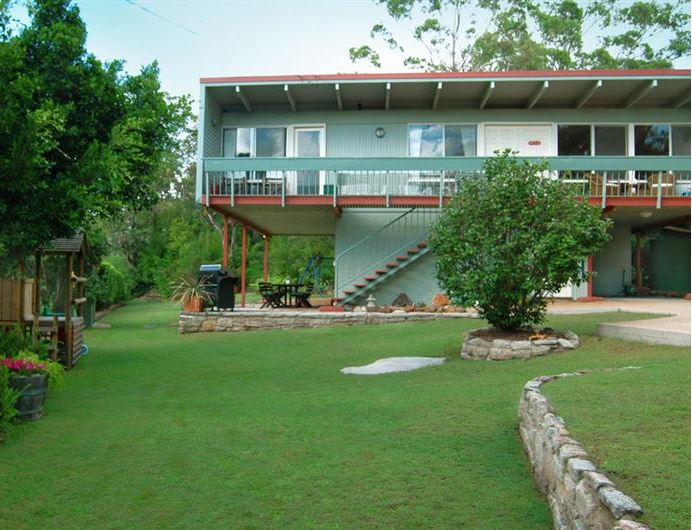 The project is a website devoted to documenting and conserving a significant expression of Australian mid-century modernism: the Lend Lease Beachcomber project home. www.beachcomberhouse.com.au is a community hub for residents, historians, journalists, architects and enthusiasts, and before the development of the website, this slice of architectural history was largely overlooked.

I have lived in a Lend Lease Homes project home, The Beachcomber, since 1995. Built in 1963, the home is both elegantly proportioned and well built, and has been sited obliquely on the block, to maximise the valley views and to catch ocean breezes. It is a well-considered design that suits Sydney’s hilly topography and climate, and was developed as a build-and-finance package at a time when demand for new homes outstripped the availability of architects and builders for individually designed homes. In Sydney in the late 1950’s and early 1960’s there was a surge in demand for affordable housing. With an expanding population and a shortage of skilled labour, the market was ready for a faster, more affordable approach to new home construction and finance.

At the time of its release, the Beachcomber was an audacious modernist structure. It excited new home buyers with its vast windows onto a shaded sun-deck, while also featuring quality architect-designed fittings and fixtures. The continued popularity of the Beachcomber throughout the 1960s prompted its evolution into four distinct versions (Marks I, II, III & IV), as well as numerous copy-cat designs by other home builders.

Soon after moving into our home (purchased from the estate of the original owners), we started to notice the distinctive lines of the Beachcomber house all around the area. In our own suburb I discovered ten more, and then, after a few years of people suggesting it was a Harry Seidler design from his time at Lend Lease, I decided to research more about the design, development and construction of these homes.

My original intention was to prepare a media article, or attract a journalist to write a story, about the history of the Beachcomber. However, at the time in 2004, there was little interest from key publications in running a piece about an, at the time, ‘unknown’ 1960s project home.

A few years later, with the advent of the World Wide Web, I decided to pull together all the material I’d discovered into a website. That way the whole story could be told, and I could make available the original Beachcomber plans and documents for anyone with an interest in conserving and celebrating these modern, and very Australian, suburban homes.

Created a website to document the history of the Lend Lease Homes Beachcomber, and provide a focus to support its conservation. This included researching and writing the content, sourcing all the images, obtaining permissions, designing the website, and uploading the material (currently over 45 separate pages and over 200 images).

2011 to 2017: Promoted the website to general and architecture media, via targeted emails and through networks, in order to generate interest and engagement in the wider community. The reach of this has also been extended through sharing of posts across Facebook and Instagram, as well as through a range of tours and events.

More than a hundred people assisted with the preparation of material for www.beachcomberhouse.com.au , and since its launch in 2011, the website has generated more than 350 individual email strings on Beachcomber-related matters.

In addition, more than sixty Beachcomber owners and friends are now connected in an informal network that arranges and promotes events, contributes to, and promotes, the website, and exchanges other information of mutual interest.

Contribution to the broader knowledge of heritage practice

Since the launch of the website in 2011, Beachcombers have become a regular inclusion in discussions about Sydney suburban architecture of the 1960s. Prior to this, most commentary about project homes of that period was dominated by reference to Pettit and Sevitt. While their homes have an extremely important place in our architectural history, Pettit and Sevitt’s range of houses catered for a different niche than many of the project homes produced earlier in that decade. Greater awareness of the Beachcomber, and of the many other project homes and architects of the 1960s, has enriched contemporary understanding of this bold and productive period in Australian home design and construction.

www.beachcomberhouse.com.au provides a resource for media to source accurate historical material, as well as locate images for reproduction. It also provides a contact point for interviews to be arranged with the architect Nino Sydney, or with other people involved in the Beachcomber world.

People who have accessed the website have been able to better inform and educate others about the unique place of the Beachcomber in Sydney’s built environment, which has created more support for valuing and conserving them.

In Sydney in particular, original Beachcombers are under pressure for demolition in site redevelopments. Often built in hilly suburbs, with proximity to the beach or other waterways, the value of the land is now disproportionate to the modest scale of the Beachcomber house. If owners and neighbours are unaware of the heritage value of these distinctive homes, Beachcombers can often disappear without anyone realising their important place in Australian suburban architectural history.

The existence (and promotion) of the website makes it much easier for people to discover the history and context of the Beachcomber house. It also makes it possible for owners to explore other options than outright demolition. These include support and referral to suitable architects for sympathetic renovations, as well as access to the ‘friends of Beachcombers’ network that can reuse or relocate unwanted homes.

The Beachcomber tribe: Not all Beachcomber owners are enthusiastic about their home being identified as such. Less than 20% of my introductory letters to owners receive replies. Where doors have been knocked on, about half the owners are delighted to be approached, but about ten per cent have indicated that the attention is unwelcome. Some feel their privacy is being breached, others suspect there is possibly some scam being perpetrated that might involve the selling of their home overseas on the internet. Yet others are wary of being included in something that might restrict the freedom to alter (or demolish) their homes. While this is on one level disappointing, not everyone is interested in mid-century Australian architecture. However, by alerting them to its status as a Beachcomber, we hope at the very least they are encouraged to value it as something special, even possibly as worth more to other people who care about such things

Media permissions and re-use fees:  On occasion there has been inaccurate reporting and commentary about Beachcombers (particularly identifying any box-like structure on stilts as a Beachcomber), but it is probably misplaced enthusiasm for the style. I’ve tried to make it as easy as possible for journalists to find clear information, but sometimes the story they want to write takes precedence over the facts.

More frustrating has been the obtaining of permissions to reproduce articles about Beachcombers on my website. Most publications and organisations have been extremely generous with providing free permission, but others have not. While some journalists have reproduced material from my sources without credit, as well as asked me to facilitate access to interview subjects, their media companies have quoted me $900 to reproduce the resulting articles on my website. As a hobby site, I don’t have a budget that could support this, nor are my intentions commercial. Instead, I have to rely on pasting links to articles, which I have no control over, and that may be removed at any time.

There is additional historic material that I have located that I could upload to the website, but recent tightening of copyright restrictions (and increases in fines) makes it prohibitively expensive to pay copyright fees. This is detrimental to the collation of hobby-ist suburban design history, even if it is an unintended casualty. It simply means that important information remains hidden, and largely unavailable in the public domain.

The legacy of www.beachcomberhouse.com.au is a very positive one.

“Mid-century modern gets a great advocacy tool in this website. It is informative and a great resource which will no doubt grow.”