In 2018 we celebrate the 100th birthday of Norman Lindsay’s "The Magic Pudding" at the author and illustrator’s former home, the Norman Lindsay Gallery in Faulconbridge.

‘The Magic Pudding’ is Norman Lindsay’s best known children’s book. He wrote it in 1917, partly to settle an argument with his friend Bertram Stevens of The Bulletin and Art in Australia, who maintained that children liked to read about fairies, whereas Lindsay said they liked to read about food.

So, Norman Lindsay cooked up a whimsical children’s book that is still loved around the world.

For 100 years ‘The Magic Pudding’ has amused generations of children and their parents with the fun and harrowing adventures of Bunyip Bluegum, Bill Barnacle, Sam Sawnoff, the Puddin’ thieves, and Albert, the cantankerous, ‘never-ending’ pudding.

Discovered in strange circumstances, Albert is a magic pudding who changes from steak and kidney to jam roll and apple dumpling in seconds. Gravy-voiced and gruff, Albert is constantly being nibbled at by his owners but never shows the damage. ‘The Magic Pudding’ features members of the Noble Society of Pudding Owners trying to protect their pudding from Puddin’ thieves. Albert is cranky, rude and gets his owners into all kinds of trouble.

And it loves, just loves, to be eaten. 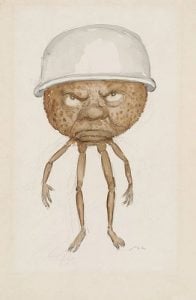 “Eat away, chew away, munch and bolt and guzzle, Never leave the table till you’re full up to the muzzle,” it rudely urges the Noble Order of Puddin’-Owners, and of course the three members are delighted to oblige.

But a secret like a magic pudding is hard to keep, and the envious eyes of professional puddin’-thieves are on the brave trio and their prize. The puddin’-thieves are cunning and masters of disguise, but no match in the end for the even greater ingenuity of righteous puddin’- owners.

“Apologies are totally inadequate,” shouted Uncle Wattleberry. “Nothing short of felling you to the earth with an umbrella could possibly atone for the outrage. You are a danger to the whisker-growing public. You have knocked my hat off, pulled my whiskers, and tried to remove my nose.”

Set in the Australian bush with memorable animal characters, ‘The Magic Pudding’ is the quintessential read about food, fun and adventure. It has never been out of print and has been translated into many languages over the years.

Harper Collins has released a special edition of ‘The Magic Pudding’ to celebrate the 100th anniversary. Find out where you can get your copy.