“As we move into the Christmas and New Year holidays, we pause to remember a busy and poignant November 2018 marking the 100th year anniversary of the Armistice of World War One – the war that was to end all wars. Many of us are fortunate not to have had to face war at Christmas. Our thoughts and prayers go out to all that who have been impacted by war, who carry memories or scars and have lost friends and family. We salute you. It was appropriate that National Trust of Australia
(Queensland) sponsor the book launched last month by Trust Volunteer Ian Curtis, ‘The Forgotten Men of Grandchester’, telling the experiences of those listed on the honour board still hanging, where it was intended to hang, at Grandchester Railway Station one hundred years later.

I also pay tribute to the volunteers of Zara Clark Museum, Charters Towers, who hosted the launch of the Kennedy Regiment exhibition now on display at this important museum.

The Trust hosted a thought-provoking State Heritage Conference and ‘Branch Committee Boast’ in Ipswich after the Annual General Meeting that saw 6 applicants for the 3 Director positions up for election this year. Incumbent Directors Henry Smerdon, Arthur Frame and Ray Holyoak were all re-elected after a state-wide secret ballot online (and by post where we did not have email contacts). Congratulations to the winners and our thanks to those not successful this round. Voting numbers were up on the last ballot but did not represent a significant proportion of our membership. Some may see this as a positive sign that members are generally content, however, we are keen to encourage engagement and would like to see more members become involved in the future.

The Trust also worked hard to lodge grant applications last month, to State and Federal Governments, towards the funding of essential repairs, conservation work and new investment at James Cook Museum Cooktown, Hou Wang Temple Atherton, the Stock Exchange Charters Towers and for a conservation management plan for Brennan and Geraghty’s Museum Maryborough. We are looking forward to some positive feedback in the New Year and can but hope the looming Federal election does not put the Federal Government into caretaker mode ahead of some decisions on the Building Better Regions Funds that could help our James Cook Museum in particular.

We have been busy on the advocacy front too – with the ‘Love Me, Save Me’ branded campaign starting to take shape around the issue of saving the Broadway Hotel, Woolloongabba, Brisbane, badly damaged by fire in September. We acknowledge the response of the Lord Mayor’s office in Brisbane and the City Council in serving a ‘show cause’ notice on the owner as a first step toward an enforcement order. We acknowledge also that Minister Enoch has extended the Stop Order to further protect the property from demolition threats.

It was particularly good to host over a hundred of our long term members at a morning tea at Old Government House, Brisbane. A lovely event to re-connect with everyone and some supportive comments and encouragement to repeat at least annually. Thank you for all who came and thank you to QUT for hosting the National Trust.

We are beginning to see our properties hosting current Christmas celebrations, including the moving ‘Dream Night at the Zoo’ at National Trust Currumbin Wildlife Sanctuary when the staff and volunteers hosted the families of long term sick or chronically ill children for a special Christmas party, in partnership with the charity, TLC for kids.

Work is progressing toward the opening in the New Year of the new ‘Wild Skies’ experience at a fantastic new amphitheatre at National Trust Currumbin Wildlife Sanctuary. I encourage all members to revisit and check out the new experience and all the other amazing improvements. It’s hard to believe a year has passed since ‘Lost Valley’ was opened, which has settled in well. Visitor numbers are strong, membership is rising and as we prepare for the school holidays we look forward to a busy time and appreciate the hard work of staff and volunteers over this busy time.

To all our members, supporters, corporate partners, Directors, Branch Committees, staff and volunteers, thank you for your support this calendar year and I hope you will have a joyful, peaceful Christmas and Happy New Year.” 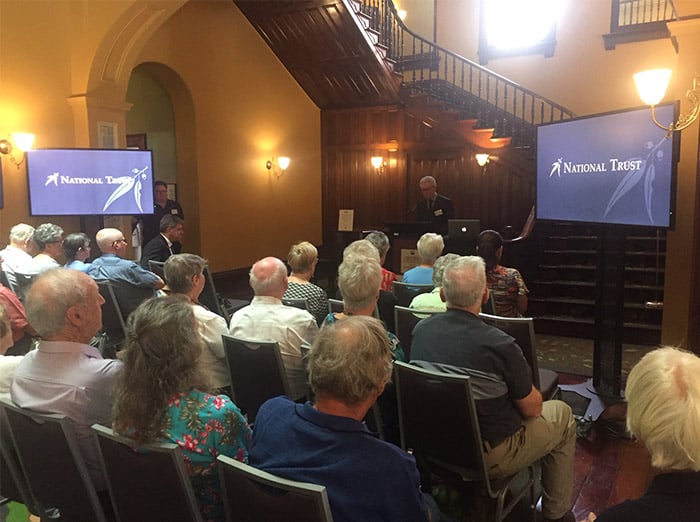 The National Trust of Australia (Queensland) recently invited long term members to attend a morning tea at Old Government House in Brisbane with the assistance of QUT.

This event saw over 100 members come together to happily share stories of days gone by and their passion for heritage conservation whilst enjoying a sumptuous morning tea. Many of them were active in the “Love Me Save Me” campaigns of the 70’s and 80’s and were thrilled to hear that the campaign has been refreshed by The National Trust in their attempts to save The Broadway Hotel in Woolloongabba that was recently extensively damaged by fire.

Guest speakers included The National Trust of Australia (Queensland) President Dr Ian Galloway and Ms Jane Alexander, Manager of Heritage Advocacy who spoke about the history of the National Trust and its growing built heritage property portfolio, the ongoing success of the Currumbin Wildlife Sanctuary property covers Trust administrative costs to enable the organisation to continue to protect, conserve and celebrate Queensland’s heritage.

Our CEO Jonathan Fisher offered guests a glimpse of the future of The Trust and shared news of a series of projects being undertaken from Currumbin in the south to Cooktown in the north.

Cooktown is particularly in focus as ‘Cook250’ in 2020 rapidly approaches. The Trust is investing in ways for the James Cook Museum to accurately share the story of the first recorded act of reconciliation and Cook’s crew and the Guugu Yimithrr people.

Jonathan also spoke about membership growth and the importance of that growth to continue to climb, to ensure that the efforts of The Trust to preserve built and environmental heritage continue to be heard by those that matter.

The morning tea was hailed a huge success by members and National Trust of Australia (Queensland) staff, and plans are now underway for our next celebration. 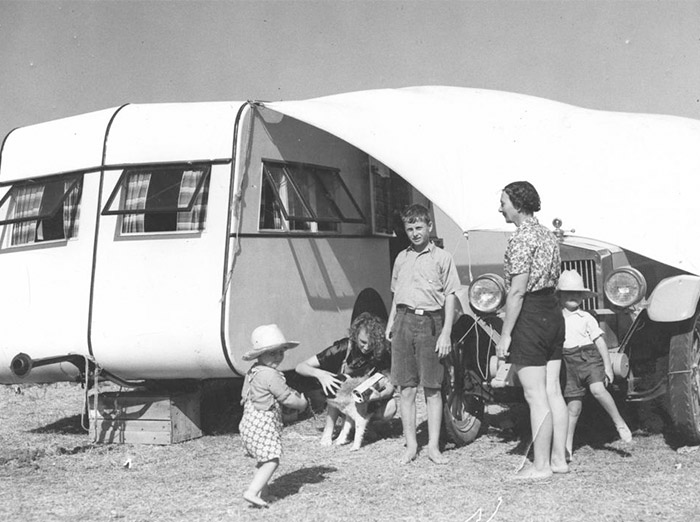 A heritage of beach holidays

Caravans and the vehicles that tow them may have changed since 1938, but a good location, a bit of breeze and the company of family and friends is a great way to spend the holidays. According to the newspapers of 80 years ago, half the population of coastal Queensland started the year on the beaches and in the surf. Has anything really changed?

For those who appreciate Queensland’s coastal heritage buildings, a number of bathing pavilions influenced by a Mediterranean style of architecture were constructed in the 1930s, like the Southport Bathing Pavilion bears a National Trust plaque which details its significance.

If you heading off on a summer holiday, have a look at the National Trust of Australia (Queensland) heritage register to see what hidden heritage gems are in the area that you’re visiting. Access our register here: https://www.nationaltrust.org.au/ntqld-register/

To renew your membership email the membership team membership@nationaltrustqld.org  or renew online now.