Towards the end of last year, the Darwin City Council’s Karama Library asked the National Trust if a speaker was available to give a talk to the Karama Seniors Group. The suggested topic was on the history of Darwin’s Northern Suburbs. Trevor Menzies, Manager/Curator of Roadmasters House Museum, responded to the call and recently gave the talk after the Library’s Covid-19 restrictions had been lifted.

Trevor used material from the Museum’s collection to cover the topic. The talk was structured around 4 historic maps – dated 1938, 1955, 1982 and 2015. Several photographs relating to the period added to the presentation. The small audience of about 10 contributed throughout the presentation with their experiences and questions, which made for a lively interactive session.

The 1938 map showed how little Darwin had progressed over the 69 years since the Goyder Survey Expedition had surveyed the town and hinterland in 1869. Almost all of the land north of the original aerodrome at Parap (built 1919) and the railway (built 1886-89) was undeveloped. The 1938 map has an interesting history. At the end of the war, US military occupation forces in Japan found a copy of the map in Japanese military intelligence offices in Tokyo. The map legend and marginal notes had been translated into Japanese. So, the Japanese had good knowledge of Darwin’s geography when the first devastating bombing attack was launched in February 1942.

The 1955 map showed the progress that had been made with post-war reconstruction. The old aerodrome land was developed into the suburbs of Parap and Fannie Bay. The airstrip became Ross Smith Avenue and the taxiways the streets of Fannie Bay. The now northern suburbs were still occupied by abandoned military installations. The remnants of the Number 65 Army Hospital occupied the northern Nightcliff peninsula. A large wartime military camp on McMillans Road, now in Malak and Karama, was used at the end of the war as a disposal area for surplus military equipment.

By the end of the 1950s development of the suburbs of Nightcliff, Rapid Creek and Milner was underway. The population of Darwin had reached 10,000 by 1959 and the town was declared a city. The population was rapidly growing, and more land needed to be developed for housing. In 1962 the government-appointed town planner Harcourt Long to plan for future development. He produced a structure plan to provide for suburbs between Rapid Creek and Lee Point Road. The first of these was Alawa where road works commended in 1965.

By 1974 the suburbs of Alawa, Jingili, Moil, Wagaman, Wanguri, Nakara and Tiwi were being occupied. The city’s population had hit 40,000 when Cyclone Tracy struck on Christmas Day, 1974 causing massive destruction. The new northern suburbs were severely impacted with some 90% of houses left uninhabitable.

Work on the subdivisions of Anula and Wulagi was well underway when Cyclone Tracy hit so these suburbs were the first to be built in the early re-construction period. New cyclone building codes were adopted which has since seen a major change to Darwin’s suburban architecture. The government also adopted a policy of outsourcing the development of land to the private sector. Prior to this the government managed land development projects in-house. The 1982 map showed the suburbs of Malak and Karama starting to be occupied, and work underway in Leanyer, Brinkin and Marara.

The 2015 map showed the extent of development up to recent times. Marina developments were completed in Cullen Bay and Bayview in the 1990s, and the new northern suburbs Lyons and Muirhead in recent times. The first of the Palmerston suburbs, Driver, was being occupied from 1982. Since then the Municipality of Palmerston has expanded to 17 suburbs with a population of 33,695 as at the 2016 Census. The Census also showed that the population of the Great Darwin Area including Palmerston was 136,828, and that of the Northern Territory as 228,836. 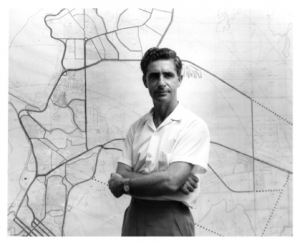