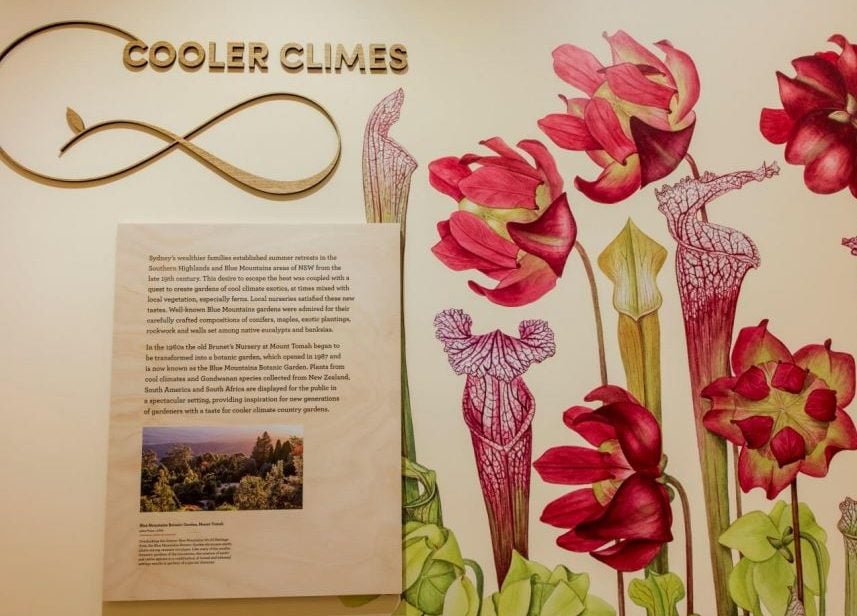 The exhibition and publication were the result of over ten years work by The Florilegium Society at The Royal Botanic Gardens Sydney Inc, formed in 2005 to create a unique collection of contemporary botanical paintings. The Society is a self-funded voluntary organisation and the artists have gifted their paintings to the Trust to create a historical record of the plants growing in the three gardens and in honor of the bicentenary of the Royal Botanic Garden Sydney in 2016.

The beautiful and precise works evoke an ongoing cycle of growth, reproduction, decay and renewal so familiar to garden lovers. “Florilegium” portrays the imperfect beauty of nature in minute detail, from the insect-chewed leaves of the ‘Eucalyptus robusta’ or the wilted flowers of the ‘Iris delavayi’ to the splendid flowers of the ‘Dendrobium speciosum’ and vibrant ‘Camellia azalea’.

Aims
In staging the exhibition, Sydney Living Museums aimed to:

Content and themes
“It takes a discovery like the Wollemi Pine to make the public aware that all from the plant kingdom has not been found and documented, named and pigeon-holed.”
Professor Carrick Chambers, 1994

“Florilegium” showcased 87 contemporary artworks by more than 60 international and Australian artists. Visitors could view up close the painstaking detail of familiar indigenous Australian plants and common garden flowers as well as more unfamiliar exotic species from Asia, the Americas, Africa and Europe.

The exhibition was arranged thematically and explored six key stories that traced the development of the Gardens and horticultural trends in Sydney and NSW and drew connections to the ongoing work of the Gardens today. Individual plant stories accompanied a selection of artworks, further articulating the themes to highlight remarkable discoveries, change in garden fashion, scientific exchange, exploration and so forth. Focus stories on botanist Allan Cunnigham (1791-1839) and the Gardens first botanic illustrator, Margaret Flockton (1861-1953) further provided an historic context for the contemporary paintings and featured dried plant specimens and personal accoutrements of their respective practices.

• FINDING A NEW NATURE: Australian flora has captivated botanists since Europeans first set foot on antipodean soil. The richness of the plants Sir Joseph Banks documented in 1770 influenced the decision to establish a colony here. In the 20th century there was increased appreciation and understanding of the enormous diversity of local flora and the potential for Australian native gardens.

• EXPLORING, EXPERIMENTING and EXCHANGING: Explorers and collectors of the early colonial period sought plants that would be valuable for commerce as well as satisfying the craving for new species. Gentlemen collectors Colonial Secretary Alexander Macleay, who developed a substantial private garden at Elizabeth Bay, and William Macarthur, who established a nursery at Camden Park, had close links with the Sydney Botanic Garden and played an important role in introducing new plants. Exploring, and collecting, experimenting and exchanging plants continues to this day.

• ROMANCE OF THE RAINFOREST: A fascination for the flora of the lush rainforests of Northern NSW, Moreton Bay (Queensland) and the Illawarra began influencing the character of Sydney gardens from the 1820s when new sections of the Botanic Garden were planted with rainforest trees. The taste for subtropical plants still endures and shapes the character of this city.

• GARDENESQUE EFFECTS: In the Gardenesque style a collection of various species is planted to display their individual beauties. This was the height of fashion in the mid to late 19th century when gardening as a serious pursuit took off in Sydney.

• REMARKABLE AND INTERESTING: Novelty and surprise in the plant kingdom has universal appeal. Some rare plants are kept in specialist collections, providing a source of intrigue for gardeners and visitors. Like the queues that formed to see glasshouse rarities in the 19th century, plant lovers still flock to see the first flowering of a bizarre species.

• COOLER CLIMES: Sydney’s wealthier families established summer retreats in the Southern Highlands and Blue Mountains areas of NSW from the late 19th century. This desire to escape the heat was coupled with a quest to create gardens of cool climate exotics, at times mixed with local vegetation, especially ferns.

The exhibition featured three digital elements: two short films and one interactive:
“I’ve enjoyed the challenge of painting the Norfolk Island pine. It’s been labour intensive… but I think, I hope, that I have captured the personality of my specimen. They do come across as really strong, dominating, loud, gregarious sort of plants. I’m quite fond of him now”. Artist, Angela Lober, 2015

The major exhibition film, “The art of botanical illustration” revealed the skill, patience and painstaking hours of work required to produce the detailed botanic artworks. The film documented artist Angela Lober creating her painting of the Araucaria heterophylla (Norfolk Island Pine) – from collecting the plant specimen at the Royal Botanic Gardens, to creating her colour palette, right through to stretching the finished artwork. The artwork was framed alongside the film space within the gallery. The film, also available online, has proved to be one of Sydney Living Museums most popular exhibition films with more than 35,000 views worldwide and numerous exhibition visitors commenting on how engaging the film was. The film can be viewed online.

The exhibition interactive related 12 of the 87 botanical illustrations to the gardens of some of Sydney Living Museums’ properties: Vaucluse House, Elizabeth Bay House, Rouse Hill House & Farm, Elizabeth Farm and Rose Seidler House. The interactive provided an opportunity to showcase the diverse gardens cared for by SLM and their long and rich history, along with the story of the people who planted the gardens and the plants they chose.

Layout and design
The exhibition design was inspired by the concept of meandering garden pathways. At no point did visitors encounter a view of the entire gallery, their interest piqued by glimpses of vibrant and supersized reproductions of the artworks, and glimpses of the framed works on walls almost out of view. Garden benches provided visitors with the opportunity to sit, relax and enjoy the ‘painted garden’. Natural materials for exhibition showcases, frames, and text labels, reinforced the concept of walking through a garden and all text labels were laser-etched ‘Araucaria cunninghami’ (hoop pine). The hoop pine was named after botanist Allan Cunningham, one of the two people profiled in the exhibition.

Audience expectations and engagement
A post visit survey conducted at the Museum of Sydney demonstrated that “Florilegium: Sydney’s painted garden” was highly regarded by visitors.

Most visitors spoke glowingly of the exhibition both through the survey feedback and the exhibition comments book. Below is a selection of visitor comments from the post visit survey:

“It appears to effortlessly achieve its result. Elements work together seamlessly to create a beautiful, visually stunning and peaceful atmosphere.”

“I was not expecting the exquisite exhibition, the overall presentation and historical references really enhanced the exhibition, the video snapshot of Angela Lober and her painting techniques, the story of Margaret Flockton – all little additions that complimented and intrigued. It was beautifully laid out and of course the paintings themselves were wonderful. ”

“I expected the botanical illustrations to be excellent and well displayed, which they were. However, I was not expecting the excellent background material integrating the plant illustrations with their history in NSW and the individuals involved in botany in NSW. I also really enjoyed the short videos on the artist and the history of gardenesque and would have enjoyed the other audiovisual display about plants etc if I had had more time.”

“Beautiful! Wonderful to be able to show the general public, the importance of plants in the Royal Botanic Gardens and give an understanding of botanical art and the time that goes into it…very informative.”

Programming
Two key offerings were produced and offered throughout the display period of the exhibition:

The Publication
The Florilegium publication was the product of an extraordinary amount of hard work and goodwill. Wholly produced and published by the Florilegium Society, the publication was supported by funding from the Australian Garden History Society, the generosity of many private subscribers and support from the Royal Botanic Gardens and Domain Trust. The project management of the book’s production by Beverly Allen and the historical essay and text for each plant by Colleen Morris were undertaken on a voluntary basis. Many people gave their time and expertise to the project to see it realised to the highest standard of design and scholarship.

Legacy
Florilegium celebrates a renaissance in botanic art and contemporary approaches to this genre. The different approaches to painting on display typify individual artistic responses to plants and reflect the diverse backgrounds and styles of the artists. Numerous visitors were inspired by the content:

“I thought the exhibition would be good … I’m now thinking of starting up watercolours, and would love to learn more about early Australian botanical art.”

Botanical art demands patient and detailed observation and the creation of the 87 intricate artworks of the Florilegium is a lasting tribute to the role and history of the Royal Botanic Gardens and Domain Trust in NSW and beyond.

The historical research into each species featured in The Florilegum has provided the volunteer guides at the Royal Botanic Gardens with a welcome resource that has provided further depth to their role in the Garden.