The Curtin Family Home Lecture allows us to reflect on the times of John Curtin, so we can better understand his philosophical and practical approach to life.

The Curtin Family Home, built by John and Elsie in 1923, has been in the care of the National Trust of Western Australia since 2002. It is one of only four former prime ministers’ homes in public ownership.

The unassuming nature of the Jarrad Street house reflects the nature of the man and his family and helps explain his political convictions and directions for the nation during the Second World War.

Past presenters have spoken on media reporting in times of crisis, the difficulties of a public life with mental health challenges, politics from Curtin’s time to now, personal accounts of life in the suburb of Cottesloe and initiatives launched during the Second World War at the time Curtin was in leadership.

The Curtin Family Home Lecture series is an annual event and part of the National Trust’s Lotterywest Heritage Conversations program.

The home is currently available for short-stay accommodation, where guests are able to read fascination information on the day-to-day lives of the Curtins, and access an audio tour of the house.

John Curtin’s use of Poetry in Australia’s Darkest Hour

Proudly supported by Lotterywest and hosted by the Grove Library

Media reporting in time of crisis

Hosted by the Grove Library 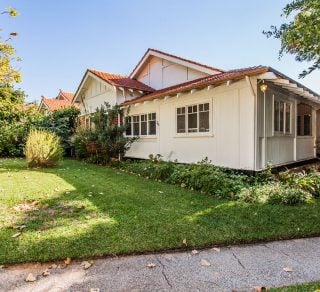