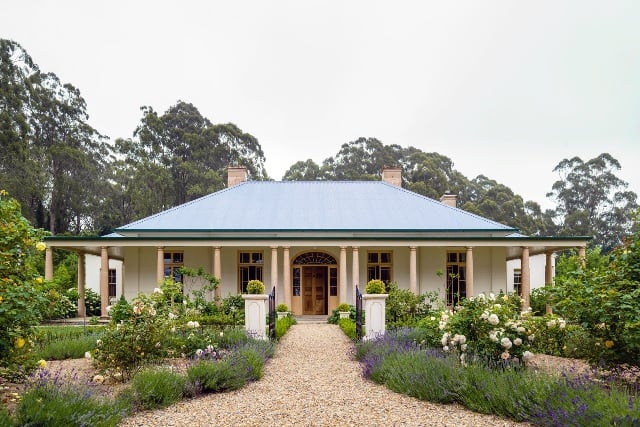 A retired couple approached historical architectural specialists, Michael Bell Architects, with their long term dream; to create an Estate that would provide an appropriate setting for their fine collection of Regency furniture. This dream Estate was described as one that may have been built in NSW, by landed gentry, between 1832 and 1842 when John Verge was most active in Sydney and surrounds.

The client, both passionate and knowledgeable of Regency Revival, embraced what was to become a collaborative journey with Michael Bell Architects.

“Berry Homestead’s design and detail was guided by research gathered from MacQuarie Fields house, Rose Bay Cottage, Fernhill at Mulgoa and Elizabeth Bay House. John Verge inspired architraves, pateras and cornices, Australian red cedar doors and windows with iron and brass hardware (by Woodhill Joinery), and working fireplaces with slate and scagliola surrounds (by Arek Werstak) were perhaps the main components around which the building was framed.

The client was quite particular in requesting a large rounded bay-window, a particularly sought after feature of 1830’s English Regency and uncommon until the 1840’s in Australia. The oval breakfast room at Elizabeth Bay House and the round bay window at Fernhill were specific reference points” explained Michael Bell.

The approach to Berry Homestead is classically welcoming, with a wide pebble path through a traditional rose and lavender garden, leading to a symmetrical columned veranda. Central, is the substantial, handcrafted wooden door of eight panels, fielded on the external face. The half-waisted side lights consist of three equally spaced lights separated by very fine astragals, common to all the fenestration. The ellipse shaped fanlight is a correctly proportioned masterful piece of joinery, supplemented by the detailed panelled reveals which extend all the way from the floor around the ellipse and down again to the floor. The large, bright entrance hall features a traditional floor of cream marble in diamond pattern with black inserts and scagliola columns supporting a large arch; together creating an impression of authenticity and ambience.

The symmetry of the building provides the two main rooms with four-metre ceilings leading away from the main entrance hall. In keeping with tradition, this provides expression to the sophisticated elegance of the Verge-inspired joinery, with margin glazed French doors and fanlights, asymmetrical architraves, panelled reveals and sloping soffits joined by hand carved fan pieces. The rooms are painted in traditional colours with gold edging to the cornices and hanging argand lamps. The timber floor is Messmate, sourced from the site itself and carefully crafted following traditional detail at all points (by Country Road Constructions).

The kitchen is also rendered in traditional style, with large exposed wooden beams, clay floor tiles and the range set into a large brick open fireplace with heavy timber mantle. The walls are of exposed brick, painted white. The joinery is in Baltic pine, including a reproduction Georgian dresser and a kitchen table in Tasmanian Blackwood, circa 1800.

Externally, the roof is galvanised iron and walls are cement rendered with ironed joints. The garden features a small lake backed by a large rustic stone stacked wall, overhung by large exotic trees – Cherry, Dogwood, Nyssa and Willow – encouraging wildlife habitation, such as wild duck. The homestead front garden embraces tradition with a low, circular rose garden (by Michael Bligh & Associates) welcoming the uninterrupted views to the east and towards the distant coast.

Without grid electricity or town water supply, electricity is generated with a solar installation whilst rainwater is collected and stored in tanks for reuse; all discretely concealed and out of view.

“A house built around a collection – this house is a ‘new’ and carefully detailed building which allows traditional techniques and details to be enjoyed.”