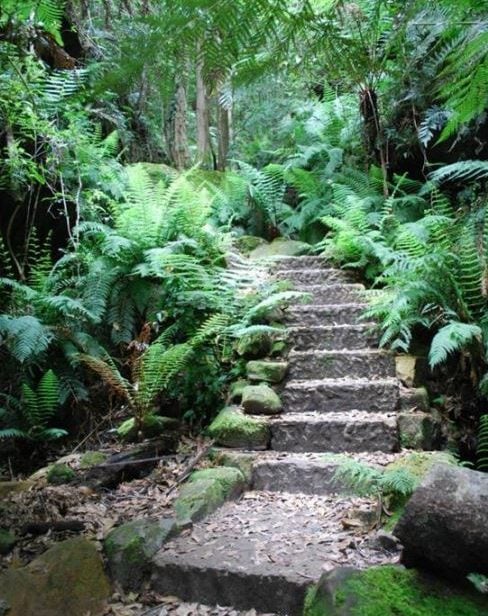 In the Blue Mountains, the Grand Canyon was formed by Greaves Creek, near Blackheath, and a track through the canyon was constructed in 1907. In 2017, NSW National Parks & Wildlife Service celebrates the restoration of the track after nearly 10 years of relentless effort.

Sydney is a bustling city of over 4.3 million people. Amazingly within 2 hours travel by car you can go from harbour foreshore to pristine bush. This is the Blue Mountains National Park, part of the Greater Blue Mountains World Heritage Area. Hundreds of thousands of hectares of wild empty space and a bushwalkers paradise. Hundreds of kilometres of tracks were built from the late 19th century to access the escarpments, lookouts, and waterfalls of the Grose and Jamison Valleys. The Grand Canyon was formed by Greaves Creek, near Blackheath, and a track through the canyon was constructed in 1907. In 2017, NSW National Parks & Wildlife Service celebrates the restoration of the track after nearly 10 years of relentless effort.

Historical context
The history of walking tracks in the Blue Mountains begins thousands of years ago with Aboriginal people who made tracks to travel throughout the landscape. Visitors can still walk some of these ancient tracks. The crossing of the Blue Mountains in 1813 was the first European track which became the passage for a pioneer road, and eventually the main road and rail corridor for a string of 18 townships.

Since then, the historical development of the Blue Mountains has followed a track. When the railway came across the mountains, NSW Railways promoted bushwalking and tourism to help fill carriages. Guest-houses were built near railway stations, and the very first constructed tracks were from the guest-houses to the nearest lookout or waterfall . The early tracks were located on private estates. In early editions of The Railway Guide of NSW, the amount of text devoted to the Blue Mountains was up to half the book. The Railways even funded the construction of some significant tracks, mapped tracks, produced guidebooks and packaged tours.

In the same way modern tourism drawcards like Dreamworld competes with Seaworld, similarly Katoomba, Wentworth Falls, Leura and Blackheath each promoted their own spectacular walks into inaccessible canyons, reathtaking waterfalls and scary cliff edges, as major attractions trying to outrank each other. Notably women, as well as men, clearly enjoyed these excursions into the bush. The making of tracks caused some unexpected consequences. Through the tracks, thousands of Australians began to engage with the Australian bush. Instead of being afraid of the bush, Australians began to admire it.

Some who walked into the Blue Mountains came out as passionate advocates for the conservation of nature in our new nation. The popularity of bushwalking also affected the changing shape of reserve boundaries
and put pressure on Reserve Trusts to enhance facilities. The historical legacy is hundreds of kilometres of walking tracks, mostly within Blue Mountains National Park

Project implementation
The Grand Canyon Track Restoration Project commenced in 2008 and is to be completed in May 2017. The track is 5 kilometres in length, and required 11 stages to be progressively funded, administered, and delivered. The project may well be the longest length of track fully restored. Both the Federal Department of Environment & Heritage ($1.37 M) and the NSW Office Environment & Heritage ($3.43 M) supported the project over this time.

The most critical challenge was to blend the protection of decayed heritage fabric with the traditional character of track-work BUT AT THE SAME TIME upgrade safety and establish greater compliance with current construction standards.

Whilst meeting the policies and guidelines outlined within the CMP, NPWS must also undertake all work in accordance with the following construction standards:

The above standards need to be suitably adapted into an extremely rough terrain. The route winds down the escarpment from Evans Lookout, moves into a deep rainforest gully, crosses and then follows Greaves Creek, climbs up to a cliff-face, runs along the southern face of a very narrow slot-canyon, follows a series of smaller cliff-faces and waterfalls, climbs up through a tunnel, and returns back up through Neates Glen. The terrain is rough and steep, and the track winds through multiple watercourses and creek crossings. The track is subject to intense rainfall, freezing temperatures in winter and searing heat in summer. The techniques and materials used in track making must survive this intense environment.

Track documentation
Most common track projects are planned at a very broad scale, however, to deliver an exact conservation outcome, each stage of the Grand Canyon Track is measured metre by metre. The full length of track is hotographed and the images re-worked to identify where existing elements are located (for conservation) and where new elements are proposed. A detailed calculation of all works is prepared for both environmental assessment purposes, and to measure the exact quantities for construction. These measurements are critical as all materials are delivered to site by helicopter. Weights and quantities are crucial. And the loads need to be dropped within a few metres of the work location.

Environmental Impact Assessment
Each stage of work has required a Statement of Heritage Impact to be prepared. The statement details the exact impact of new work on the historic heritage values of the track. An application is made to NSW Heritage Office for s60 / s57 as required. Additional environmental impact assessment is prepared to assess the impact on other values such as community, flora, fauna, and impact on potential aboriginal heritage. A Conservation Risk Assessment or Review of Environmental Factors is prepared for assessment as required. A new works certificate is submitted detailing any additional engineering requirements, and this is determined following approval of the above applications.

Wafinding signage is extremely important in a National Parks context. The more people understand where they are, the more willing they will be to engage with their surroundings. Clear wayfinding encourages awareness, and is critical for safety and risk management. This works ‘hand-in-glove’ with making tracks accessible to visitors and to maximise appreciation of the values of the park. The Grand Canyon Track Restoration Project required approximately 20 signs and was a early test-case for new NPWS Signage Manual 2010. The signs implemented the new signage hierarchy, successfully proving the scale, materials and language sat nicely in the Grand Canyon landscape.

Communication Planning
Common construction projects usually have a site fence to keep out unauthorised visitors, however, National Parks areas are far more fluid. In the Blue Mountains, the track system is continuous and access may often be available from adjoining lands such as council areas or privately owned land. In addition, a bushwalking group may be planning a walk from 10 kilometres away. Consequently, the communications planning needs to be sophisticated.

NPWS has a centralised alerts system that logs all closures state-wide. In addition, the Walking Track Project directly communicates with over 100 stakeholders, including bushwalking groups, tourism authorities, bus companies, and community groups. In addition, these groups forward updates to hundreds of members. Communications with the public is always kept positive. The benefits of track-work is always promoted, alternative routes are planned, and visitor safety is always paramount. We regard any feedback as good feedback. Helicopter planning complicates the risks and the solutions even further. CASA guidelines require that no person or dwelling be within 300 metres of a flight path.

Conclusion
Restoring heritage fabric is a critical objective of this project, however, other factors can also measure project success. Other key heritage principles are to keep the tracks open and to maintain safe visitor access, and the Grand Canyon Track— Restoration Project has achieved this spectacularly.

Asset Value:
The total project value 2008-present is $4.8 million. Only minimal maintenance was required to the track over this period. Therefore the investment has provided a half day recreational experience for approx. $8.19 per visit. When considering the asset life of 20 years (a conservative estimate), this equates to $3.27 per visit.
Note: a track of this type with heavy reliance upon sandstone structures could have an asset life in the range of 50-100 years.

Visitor Use:
Visitation to the Grand Canyon Track between 2008-2017 (during the life of the project) has totalled 586,000, and this represents an annual increase of more than 100% (even allowing for 50% track closures whilst works were being completed). Increasing patronage along the Grand Canyon Track promotes and highlights World Heritage values to the Australian and international community.

For further information on the Grand Canyon Track.