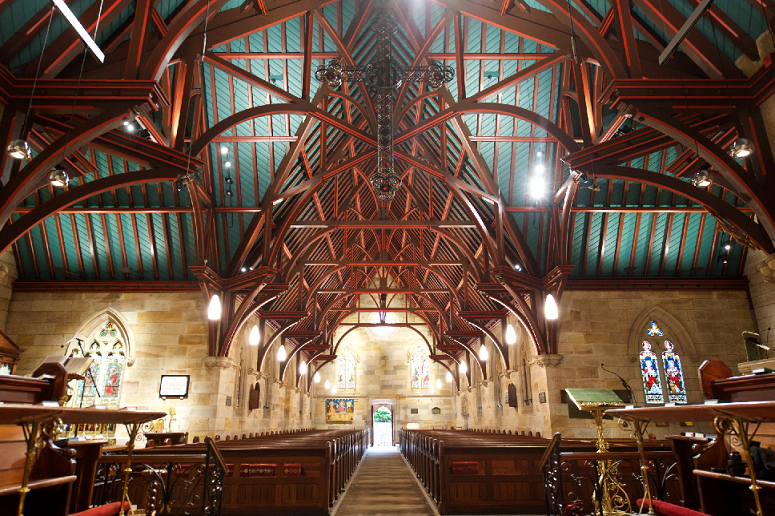 Restoration of the interior of the Edmund Blacket church by stripping out the existing lighting, cooling and heating systems; cleaning, repairing and repainting the timber ceiling and roof structure; cleaning and repairing the stained glass windows and sandstone walls and installing new lighting.

St Paul’s Anglican Church in Burwood is a beautiful example of Edmund Blacket’s suburban church, however year of use had cause its brilliance to dull. A series of lighting, heating and cooling upgrades had resulted in the space becoming cluttered with detracting elements. The timber ceiling and roof structure had not been cleaned or painted in a number of decades, and the paint had faded and become covered in dust and soot and appeared to be a consistent dull brown. The existing lighting was limited, only providing functional light to the users of the church. The sandstone walls were dirty and had areas of hard mortar repair. The stained glass windows were dirty and some were damaged.

The congregation at St Paul’s felt that it was important to restore the space to its former glory. They began to raised money through the National Trust and applied to the NSW Government Office of the Environment and Heritage for a grant to do the work. Paul Davies Pty Ltd was appointed to provide heritage advice and assist the congregation in achieving their goal. Illuminated Design was employed to design the new lighting. The Hannam Group was contracted to carry out the works.

Based on their previous knowledge acquired through their involvement in numerous church restoration projects across Australia , including the restoration works at Edmund Blacket’s St Andrews Cathedral, Sydney and St Mark’s Darling Point; and further site investigation Paul Davies Pty Ltd developed a schedule of works and selected the paint colours for the ceiling and roof structure.

Illuminated Design, using their extensive lighting experience, particularly their involvement in the lighting of St Davids Cathedral, Hobart, developed a lighting design which provided light for the congregation, illuminated the roof volume and important elements of the building, and created event lighting for concerts and performances.

The Hannam Group coordinated a group of skilled subcontractors including Heritage Stonemasonary, who worked to lovingly bring the church interior to its current magnificence.

The work was not easy. The 12m internal height of the church, and the requirement that to clean, sand and paint the entire internal roof structure, meant that the whole volume had to be completely scaffolded with 5 levels of scaffolding. The cleaning and controlling of possibly 100 years of dust was difficult, with buckets of water having to be carried up and down 12m during a hot summer with no means of cooling. The original Blacket painting design involved painting the complex roof structure brown and then cutting in red highlights on every chamfer of every beam which the painters painstakings replicated. The electrical power of all the lighting had to be carefully concealed in the structure so that the uplighting would not highlight it, the pendant lights had to be lined up across the whole volume of the church, the uplights carefully adjusted to ensure even lighting across the ceiling and the spots lights adjusted to provide the all important highlighting of significant elements. The hard mortar patching had be carefully scrapped out and the lime mortar restored.

The outcome of all this work is a delightful space. Edmund Blacket’s original design is now superbly celebrated in colour and light.

“Careful, thorough and a great result. This Edmund Blacket church is a joy.”