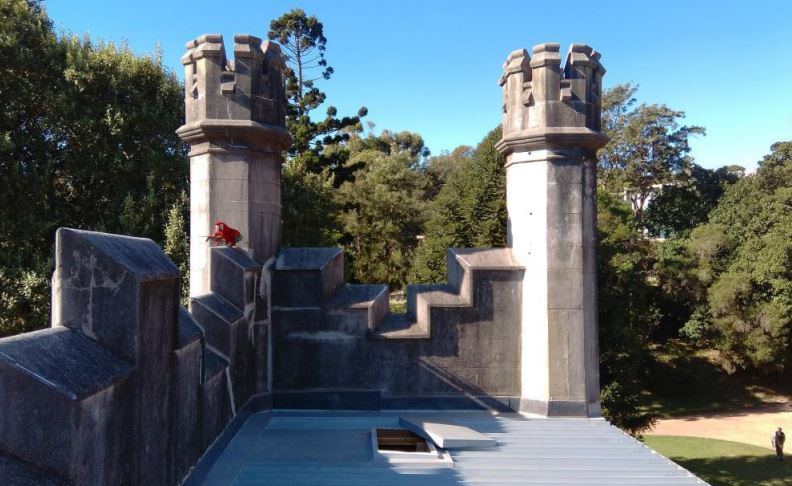 Investigation – A detailed inspection of long term deterioration of both the interior and exterior was carried out before any repair approaches were proposed. The condition of the fabric was recorded photographically.
The history of the battlements and turrets was investigated to inform an understanding of significance, materials and the intersections between different phases of work.

Review and testing – A group of likely responses was discussed with those involved in the long term care of the building, eg curators and contractors who had carried out works to the building in the past. Samples of finishes were trialled and then specification, schedules and drawings were finalised and tenders sought.

Execution – The works were programmed for winter to ensure the best conditions for external lime repairs and washes. Contractors with experience in traditional lime and lead practice were involved in the works.

The area for work was in an inaccessible location. This made access for the survey and for installation of the scaffold over the drawing room roof difficult.

Trade skills for the types of works carried out on this project are limited in Sydney and some relearning of old skills/knowledge was required.

The 1917 battlements and turrets were erected by the Trustees of Vaucluse House soon after the site was established as a house museum. The Trustees sought to ‘finish’ the parapets on the eastern side to match those that had been begun by the Wentworth’s on the western side, in order to enhance the completeness of the house.

At one time, there had been a desire to remove the 1917 Trustees Battlements and Turrets, as it was felt they were not as significant to the site as the Wentworth era fabric. However, it was now felt that the Trustees’ work reflected an important phase in the building’s development. Additionally, the removal of the parapets and turrets was likely to disturb older, more delicate masonry below and thus it was better to retain and repair them.

The detailed survey of the building sought to determine:

Traditional recipes for tinted lime wash. A photographic record of the condition of fabric prior to work was also carried out.

The survey found the causes for the ongoing damage to be:

Documentation of the existing conditions and the specification and schedule of works for the proposed repairs was carried out by Elisha Long, Head of Heritage at Sydney Living Museums.

Approach to the project:

The approach to the project was to carefully review the history of the site and to diagnose the contributory causes prior to proposing responses. The causes were found to have multiple origins and these were comprehensively addressed.

Repair responses came from reviewing evidence of past finishes on the building and from techniques with demonstrated efficacy, egg lead flashings.

The render on the Wentworth era masonry was found to be an early Portland Cement. This material has a much lower compressive strength than contemporary Portland. It was therefore decided to use a material with very similar properties and chemistry to the original material: naturally hydraulic lime.

An inspection of the renders demonstrated that there had been a yellow wash on the surface. It appeared that it had probably been applied into the green (ie uncured) render. It is likely that it was not a secondary coat like a lime wash, though the same materials were involved. In terms of responding to the need to fill micro-cracks in the existing render, lime wash was the closest available material to the original finish. This was therefore used.

The emphasis placed on diagnosing the causes of the decay before anticipating the responses follows accepted conservation practice, but this project demonstrates the effectiveness of the approach and the continued need for it.

There had been many attempts over many years at addressing the problem, but none had been successful.

Contribution to the broader knowledge of heritage practice:

The work undertaken to preserve the 1917 additions to Vaucluse House represents a shift of emphasis in conservation approaches from a singular focus on the Wentworth period of occupancy in favour of a broader view of significance.

The principal conservation outcome was the protection of significant fabric from further damage due to water ingress.

The external skin of the building is now weathertight, the water weeping out of cracks in the external renders has ceased and the interior finishes are drying out.
The internal plasters will soon be replaced now that the project has been completed for a suitable length of time for the masonry to begin to dry.

The Trustees battlements and turrets were found to be made of early, locally produced, pre-cast concrete.

“A great use of traditional techniques to rectify continuing damp issues – well researched and analysed and beautifully executed.”