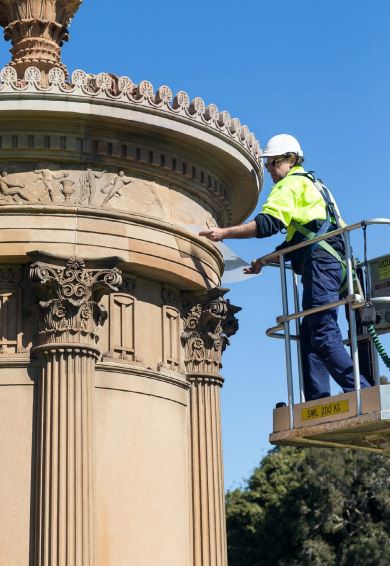 The Choregic Monument of Lysicrates is located in the Royal Botanic Gardens close to Farm Cove seawall. The monument is a copy of the original, erected in Athens in 334 BC. The project included research, condition assessment, desalination, re-carving and surface stabilisation. Community instigation and involvement were a major part of this project.

The Choregic Monument is significant for its form, material, craftsmanship and historical associations. The Monument is listed on the National Trust Register, the City of Sydney LEP and is an item located within a Conservation Area. The original monument in Greece is believed to be the first external use of the Corinthian order and is included in architectural history books to demonstrate the composition of the Corinthian capital. Sydney’s copy dating from 1870, allows scholars, students and the community to have access to a faithfully proportioned replica to study and enjoy.

The Monument demonstrates the high quality caving and copyist skills of stonemason Walter McGill, known for also carving the glorious Corinthian capitals of the Australian Museum. The Monument is significant for its association with the former Premier of NSW, Sir James Martin as in Martin Place who commissioned the work for his garden in Potts Point in 1870. The Monument was relocated to the Royal Botanic Gardens in 1943.

Instigation of the Project:
In 2014 private citizens, Patricia and John Azarias observed the Choragic Monument was in need of care during a stroll in the Royal Botanic Gardens in Sydney. They created the Lysicrates Foundation to raise funds from private donors and the State Government’s Minister’s Stonework Program (MSP) matched the funds dollar for dollar. This is the first Private/Public Partnership the MSP has undertaken. The total cost of the project was $450,000.

Conservation Approach:
With private donor funding came preconceived ideas of ‘restoration’ and expectations of the monument to appear clean & improved. The MSP team worked closely with the donors to offer a framework for conservation decision making for the Monument based on the guiding principles Burra Charter. A major challenge of this project was deciding on the level of stone replacement given the existing condition and ongoing exposure to harsh environmental conditions. Issues of significance based on form (Corinthian order) were closely assessed authenticity.

In the hierarchy of significant elements within the Monument, the frieze is highly significant as the carvings tell the story of the Greek God Dionysus fighting off pirates who turn into dolphins when thrown into the water. The frieze is constructed from 3 stones, each telling a third of the story. The team chose to re-carve one of the three stones (south-west facing) due to its advanced state of decay. The surface of this stone had lost all recognisable detail, as shown in the attached photographs. Although the remaining two stones are in a reasonably weathered condition, the rate of deterioration has been slowed by desalination and repointing the upper areas to prevent water ingress. The primary objective of the project was to retain as much of the original sandstone as possible while stabilising and protecting the monument as a whole to ensure the significance of the item is retained for the next generation.

Research & Documentation:
Measured drawings were prepared mapping the condition of the stone to provide a record into the future and to compare the condition with records prepared by the Stone Program 20 years ago. Archival professional photography was commissioned to record the Monument before, during and after the works. The re-carving process required the stonemasons to research scale and stylistic differences between the original monument and the Sydney version. A key document referred to for re-carving one of the frieze stones measured drawings of the original from “The Antiquities of Athens” by Stuart and Revett published 1748.

Project Engagement & Legacy:
In summary, no other public monument in NSW reaches out to such a diversity of community interest. Conservation works have been a catalyst for many great and lasting community events and creative pursues, mainly due the passion to the projects instigators Patricia and John Ararias.

Greek community – through the Monument’s connection with the original 334B.C. Choregic Monument in Athens. John Azarias, was interviewed on Greek radio about the conservation project and the Lysicrates Theatre Prize.

Law community – James Martin commissioned the Monument f in 1870. Conservation of the monument has provided an interest in the law community to pay homage to Martin for his achievement as Australia’s first Premier and Chief Justice. An Inaugural Martin Oration was established by the Lysicrates Foundation and given by the Hon. T.F.Bathurst AC, Chief Justice of NSW on 25th November 2016 (Commemorative booklet attached).

Theatre community – The Lysicrates Prize was established in 2015 and is an annual theatre prize, the Archibald Prize for Playwrighting, inspired by the ancient Greek monument, erected in 334 BC. in Athens to celebrate a win by the sponsor, Lysicrates, in the Great Dionysia theatre competition of that year.
This Sydney event attracts at least 500 people to the Monument every year as it provides the setting for the announcement of the winner. Financial Review article, 3rd February 2017 (attached) & interview on Eastside 89.7FM radio http://www.afr.com/lifestyle/arts-and-entertainment/theatre-and-dance/sydney-philanthropists-create-the-lysicrates-prize-20170131-gu2c75

Byron Society – the original Monument has an significant link with Lord Byron, who wrote poetry inside the monument while staying in Athens in the 1800’s. The Australian Byron Society has held gatherings in the Botanic Gardens at the Monument to celebration Byron’s birthday.

Published on Oct 16, 2016. Education about the significance of the item and the conservation works was an important aspect of the project.

A song ‘The Ballad of Martin and Lysicrates’ – written by the Governor of NSW’s wife, Mrs Hurley and sung by Mrs Hurley at the public unveiling of the completion of the conservation works in the Botanic Gardens in October 2016.

“Terrific work from the Minister’s Stonework Program on a replica of a 334BC Greek monument in the Botanic Gardens involving investigation, desalination, recarving and stabilisation.”