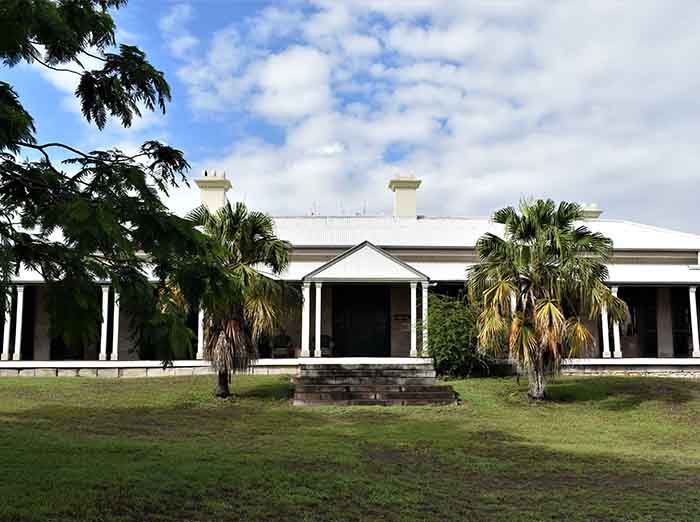 Overlooking the Bremer River, Claremont is a rare example of a Georgian-style sandstone villa. It was designed in 1857 by William Claydon Wakefield for John Panton, a prominent Ipswich merchant.

The town of Ipswich developed around the quarry and limestone processing site established originally in 1827 by Moreton Bay Penal Colony convicts and their overseers. In 1839, George Thorn was put in charge of the Limestone Hill settlement, staying on following the departure of the convicts to become a merchant, pastoralist and, by 1862 when he purchased Claremont, a leading figure in Ipswich.

The extensive grounds of Claremont were reduced in 1874, when the land between the villa and the Bremer River was resumed for the Brisbane to Ipswich Railway and, reduced  again in 1919 through subdivision by Claremont’s next owner, George Rennie Wilson, who had purchased Claremont in 1906. Wholesale and general merchants, Geo. H. Wilson and Co., had commenced trading in Ipswich in 1853.

The verandahs of Claremont were rebuilt to a bungalow style during alterations in the 1920s. Sold to Jessie Violet Preddy, it was used as a boarding house between 1924 and 1939, later being divided into three flats, its land then subdivided further. By the 1940s, Claremont was run down, the ends of both wings demolished. Purchased by the Queensland Sub-Normal Children’s Welfare Association, it became a hostel. Further alterations were made to the roof and bathrooms installed over the brick lined cellar with its half spiral access stair.

Although some features such as the verandah roof have been reconstructed, the interior of Claremont is rich with decorative details, some original marble fireplaces and a kitchen with a stone flagged floor.