The Trust has strongly objected to the proposed Modification to the Barangaroo Concept, stating “this is not only the final piece of Barangaroo, it is the piece with the most potential. Neither the initial proposal, nor this modification, are an outcome worthy of this location.”

What did we object to?

The National Trust (NSW) has objected to the proposal, which shows a complete disregard for the heritage significance and character of Millers Point and its obstruction of historic view lines to and from Observatory Hill.

The Trust has three main issues with the proposal.

1. It is not a valid modification application

The National Trust (NSW) feels that the substantial changes on exhibition cannot be considered a “modification” to the approved concept.

Under planning law, “modifications” can only be made if they:

However, the proposed modification includes immense design changes, a floor area increase of over 96,000sqm, large environmental impact, and is nowhere near the same design as the original concept. The Trust believes this project to be unjustifiable as a modification, and thoroughly objects to this application as a valid modification request. 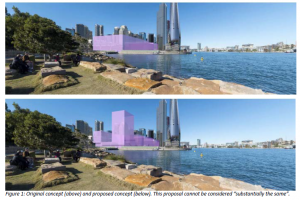 The proposal includes a huge 73m tower that blocks direct views to and from the heritage listed Observatory Hill and the Sydney Observatory.

It is inconceivable that Observatory Hill would not have been an important lookout and site for the local Aboriginal population, yet the application does not assess the aboriginal cultural value of Observatory Hill and its sightlines, or the project’s impact on these values. Aboriginal cultural values, and the subsequent impact of the proposal on these values, must be considered. Observatory Hill was also an important viewing point after settlement, chosen as the sites for Fort Phillip, the Signal Station and the Observatory all because of its commanding views.

The scenic vistas from the Hill are renowned by locals and tourists alike – as early as 1977, in a report to then Premier Neville Wran, the government noted that Observatory Hill:

“…affords unique and splendid views, particularly to the west. It surely must be one of Sydney’s most precious open space assets”

The increase in building height and the proposed tower directly west of the Observatory will block these incredibly important views. To reduce the viewing powers of a state significant observation point is a totally unacceptable outcome, and the Trust completely objects to these obtrusive design elements. 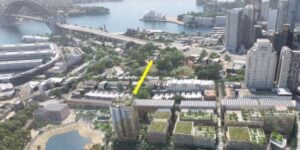 3. The proposal severs the maritime connection of Millers Point to the harbour

The design does not respect the heritage value of The Rocks, Millers Point and the Sydney Observatory, it is intrusive to the character of these historic areas and their interesting streets and views to Sydney Harbour.

The scale of the proposed development does not respect the values and character of the adjacent State Heritage Register listed Millers Point Conservation Area.  The bulk of the proposed buildings dominate the urban character along southern High Street, and will both physically and metaphorically overshadow these historic houses.  Where initial view corridors along Barangaroo were designed to be generous and proportionate, the proposed increase in floor space and building heights impoverish these historic vistas.

The overall bulk and scale of the proposed design has a negative effect upon the heritage character of the State Listed heritage precincts, will have immense impact on their maritime relationships with the harbour and cannot be accepted as a good design outcome.

In response to our key objections, the National Trust provided the following recommendations for a better project with greater design integrity: