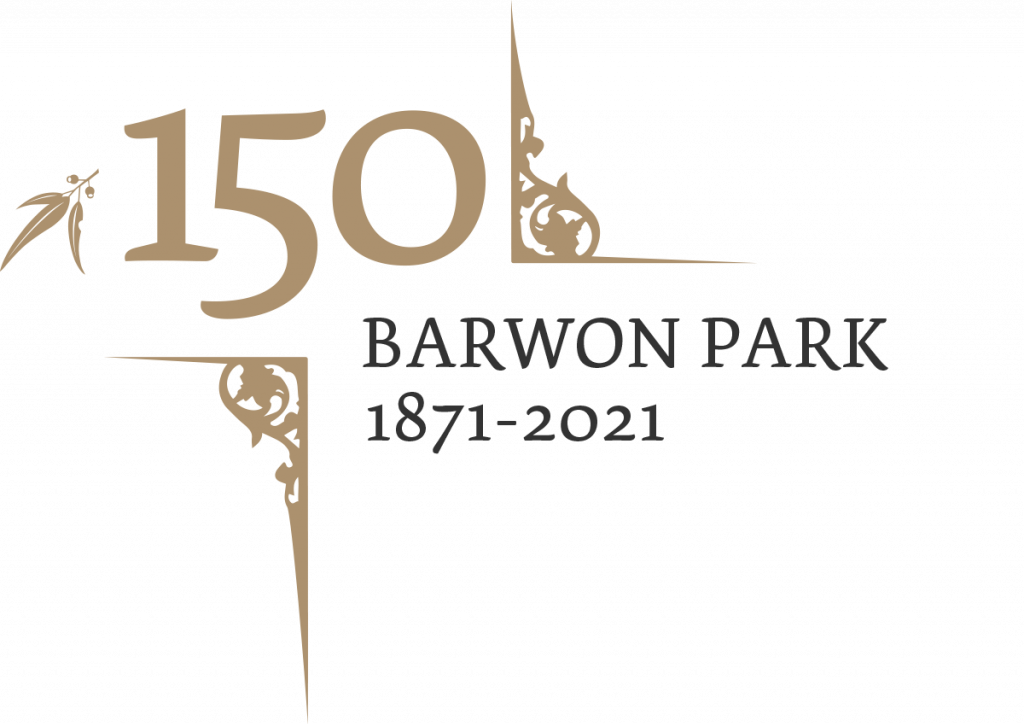 We acknowledge the traditional custodians of the lands on which Barwon Park is located, the Wadawurrung people. We pay our respects to their Elders, past and present, and recognise their continuing connections to lands, waters and communities.

In celebration of 150 years of Barwon Park, we share the story of the rural homestead and the Austin and Batson families who once called the mansion home.

Thomas Austin was born in the English town of Baltonsborough, Somerset in 1815 – the youngest of six sons born to John Austin and Nancy Lucas. In 1831, along with brother James and other family members, Austin set sail for the colony of Van Diemen’s Land (Tasmania) to join older brothers Solomon and Josiah who had followed their uncle – also named James Austin – to the colony in 1825. James Senior had arrived as a convict some years earlier and following his emancipation had amassed a sizeable estate, established on the back of profits derived from a ferry service across the River Derwent at the location still known as Austins Ferry.

James Senior died unmarried in December 1831 and his estate was distributed amongst his surviving relatives. Thomas and James, with the help of older brothers Solomon and Josiah, had meanwhile established themselves in business. Seeing an opportunity to further expand the family’s interests, in 1837 Thomas and James were amongst the first European settlers to cross Bass Strait to take up land in the newly established Port Phillip District, following the lead of the Port Phillip Association who, headed by John Batman, had signed the controversial Batman Treaty in June 1835.

James and Thomas established their first land holdings on the banks of the Barwon River near the present town of Winchelsea, claiming three separate squatting runs which they eventually consolidated into the 29,000-acre property known as Barwon Park. James moved on to establish other squatting runs and business interests, but Thomas remained at Barwon Park and in 1845 married Elizabeth Phillips Harding, sister of William Harding, co-founder of the neighbouring Mt Hesse Station.

In the early years of their marriage Thomas and Elizabeth lived in a modest, single-storey bluestone house located a short distance from the river. From this early base Thomas oversaw his stock (mainly sheep), built a training track, and established a thoroughbred breeding program which saw him credited by many as the founder of the Victorian horseracing industry.

Infamously however, in 1859 Austin took receipt of several game animals, including two dozen wild rabbits which were established as a breeding colony at Barwon Park. Within a few years the rabbit population began to increase dramatically, spreading into the surrounding district and beyond. So successful was their spread that by December 1867 a shooting party on the property bagged around 1,000 rabbits in three hours.

The event was organised by Thomas Austin who was hosting one of the most important dignitaries to visit Australian shores at that time – Prince Alfred Duke of Edinburgh, second son of Queen Victoria and the first member of the royal family to visit Australia. So successful was the hunt that another was organised for the following day before the Duke departed for Colac.

In 1869 the Duke paid a return visit to Barwon Park and it was at this time that the Austins made the decision to build a home more befitting of their status. To do this, they engaged the services of Scottish-born architects Alexander Davidson and George Henderson who had designed several prominent public and private buildings in the region.

For the location of their new home, the Austins chose a site a little to the north east of the original homestead, set back from the Barwon River and with easy access to the road to Geelong. Building commenced in 1869 and took until 1871 to complete, with tenders for stables and outbuildings called in 1870.

The mansion was designed as a square, two-storey, Italianate-style building with a formal front entrance facing east and two wings extending to the west. These formed a courtyard at the rear of the building facing the stables. Both house and stables were constructed of locally quarried bluestone, and the ornate ironwork on the surrounding verandah was cast by the Geelong foundry of Humble and Nicholson. In all, the building comprised 42 rooms including servants’ quarters, scullery, kitchens, a nursery, bedrooms, entrance hallway and grand ballroom. The interiors of the main rooms were fitted with elaborate plaster cornicing and timber work.

By early 1871 construction was complete and in March the furniture arrived, shipped from London ready for installation. Finally, on 30 June 1871, all was in readiness for a grand ball to celebrate the completion of what was now Victoria’s finest homestead. A special train ran from Ballarat to Geelong and an array of private and hired coaches conveyed over 170 invited guests to their destination. Upon arrival at Barwon Park their approach was guided by burning lights spaced at intervals along the carriage drive which led to the mansion, itself illuminated by an array of Chinese lanterns. The dancing continued until dawn.

The gaiety would not last. Within a few short months of the mansion’s completion, Thomas Austin’s health declined. On 15 December 1871, whilst visiting Ballarat where two of his sons were studying, he died. His funeral took place three days later and was one of the largest seen in the colony to that time.

Unsurprisingly, his grand new mansion passed to his widow Elizabeth for the remainder of her life. After an initial mourning period, Elizabeth turned her interests and substantial financial resources towards charitable pursuits. Her bequests ranged from small local donations, to her largest and best-known endowment – the Austin Hospital for Incurables – which was established in Heidelberg, Melbourne in 1882. For the next 30 years Elizabeth involved herself with numerous committees and community groups. Her other notable philanthropic contributions included the founding of the Elizabeth Austin Homes in Geelong and a substantial donation to “Cottage by the Sea” at Queenscliff, established to provide respite for sick children.

In August 1910 it was reported that Mrs Austin was gravely ill after having suffered a stroke at home at Barwon Park. She never regained consciousness and died on 2 September. Her funeral was well attended, and she was laid to rest with her husband in the family vault at the Eastern Cemetery.

Following Elizabeth’s death, the contents of the mansion were sold at auction. In 1912 the mansion and surrounding 320 acres of land were purchased by Stephen Batson for £6,716. Stephen was the son of Edward Batson and his wife Mary Chasey who already had a long association with the property. Edward, a Somerset native like the Austins, had been induced by them to come to the then Colony of Victoria to manage Barwon Park. He and Mary married in 1857 and raised a family of ten children, some of whom – including Stephen – were born on the property.

In 1888 Stephen married Elizabeth Higgins – another employee of the Austin family – and by 1899 the couple had four children (an infant daughter Mabel, born 1898, died that same year).

In 1921, some four years before Stephen’s death, ownership of the mansion passed to Sydney Edward ‘Sid’ Batson, Stephen’s eldest son. His younger son Arthur Stanley had died three years earlier whilst on active service in Egypt with the Australian armed forces. Trooper Batson of the 8th Light Horse Regiment, aged 25, died in hospital of pneumonia – possibly a victim of the influenza pandemic which spread across the world in the wake of World War I. His remains are interred at the Australian War Cemetery in Cairo, Egypt. Stanley, as he was known to the family, is further commemorated in a stained-glass window gifted to St Thomas’ Church of England, Winchelsea by his surviving family.

After inheriting Barwon Park Sydney lived on the property with his sisters Lillian Ethel ‘Lil’ and Mabel Constance. All three siblings remained childless and over time, the mansion fell into disrepair. However, in their later years, the Batsons devised a plan which they hoped would save the estate. When Sydney died in 1969, the mansion and property was bequeathed to the National Trust of Australia on the condition that they allowed his sisters to live out their remaining lives at Barwon Park.

In 1974, following Lillian’s death in 1973 (Mabel having passed in 1970), the National Trust took control of the property. The Barwon Park Promoters were formed in 1975, followed by a Barwon Park Board of Management whose role it was to promote the mansion and raise funds for its refurbishment. They employed a range of initiatives including open days, exhibitions and even the filming of the 1977 film The Getting of Wisdom.

Along with several government grants, these funds were used to undertake substantial restoration works during the 1980s up to 2010. Over the years, original furniture and furnishings sold by the Austin family following Elizabeth’s death in 1910 have been returned to the property and can now be seen on display in their original context.

More recently, in 2020 thanks to a generous donation from Dorothy and Will Bailey, funding from the National Trust of Victoria Foundation and the DELWP Living Heritage Grant Program, substantial works to the Shearing Shed were completed. The shed, erected in 1920, is a significant outbuilding at Barwon Park and demonstrates the later workings of the farm by the Batsons.

Today, Barwon Park is open for public visitation on Wednesday and Sunday, or for function hire. It remains one of the most significant examples of 19th century architecture in the state of Victoria.

The National Trust is proud to be a part of Barwon Park’s past, present and future, sharing this outstanding mansion and landscape with the people of Victoria and beyond. The mansion has developed with the community of Winchelsea for over 150 years, and we hope it continues to do so for 150 more. 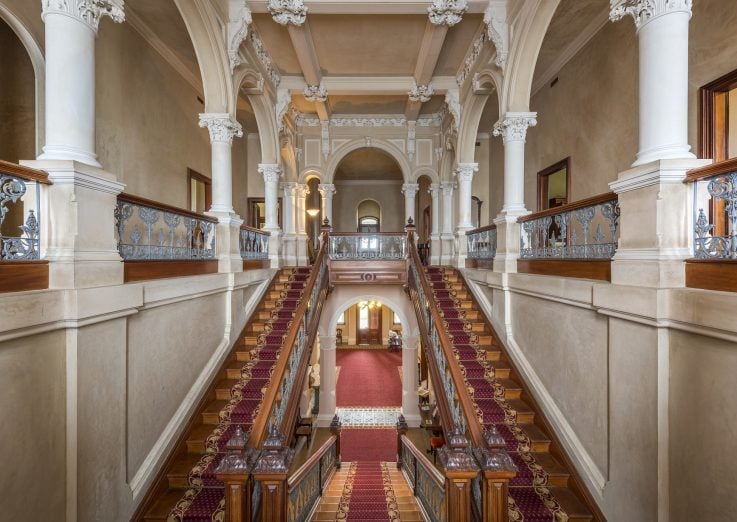 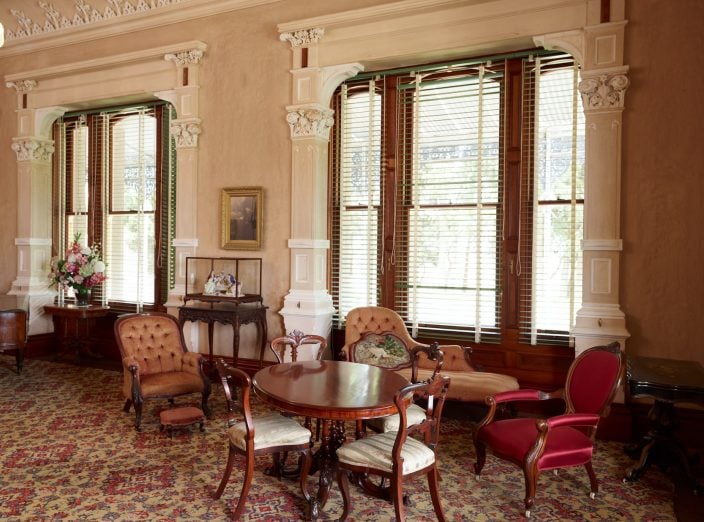 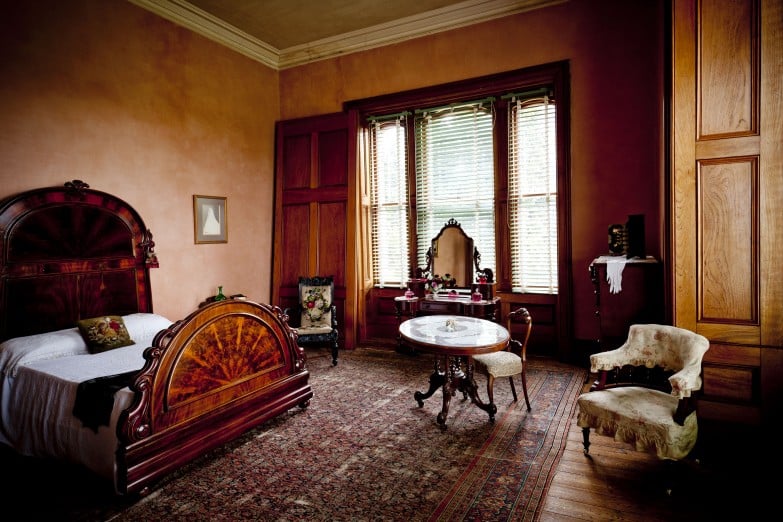 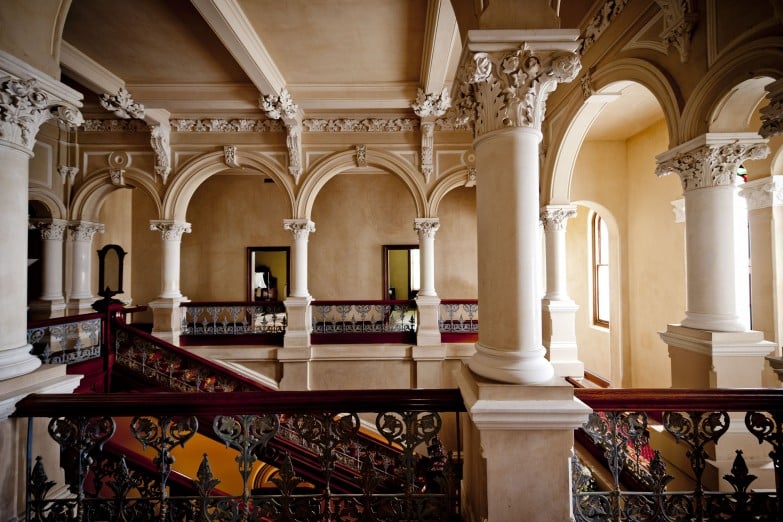 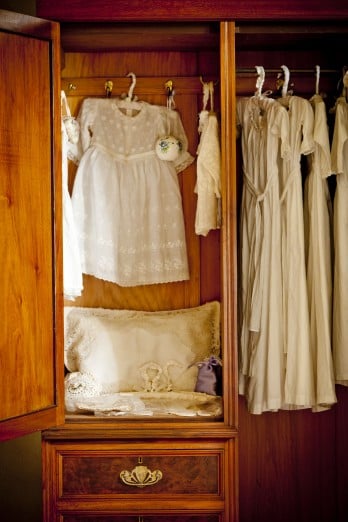 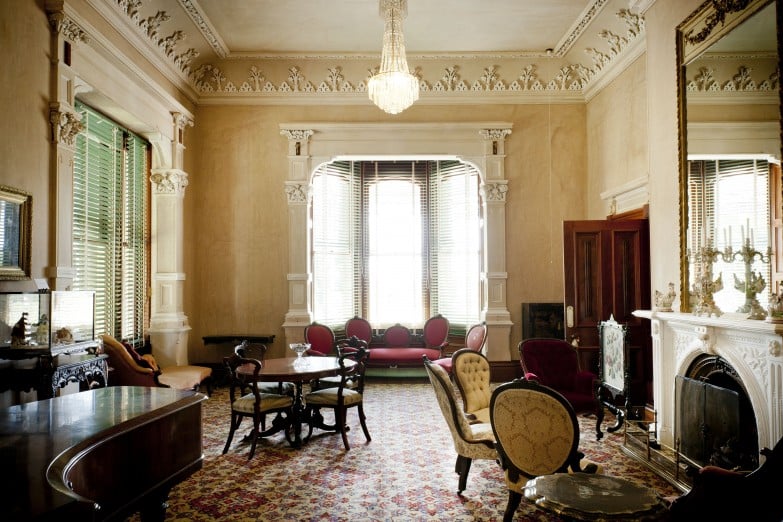 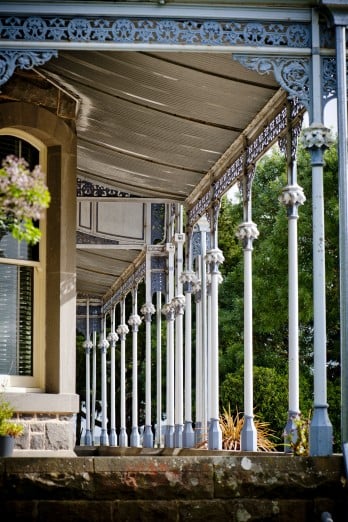 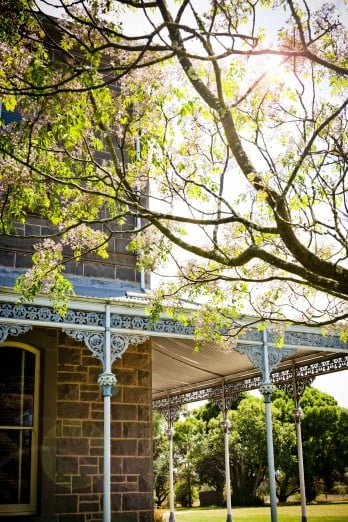 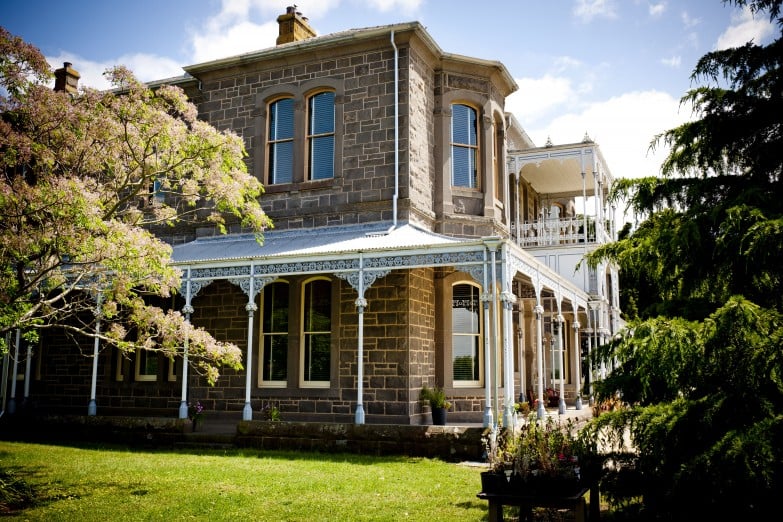 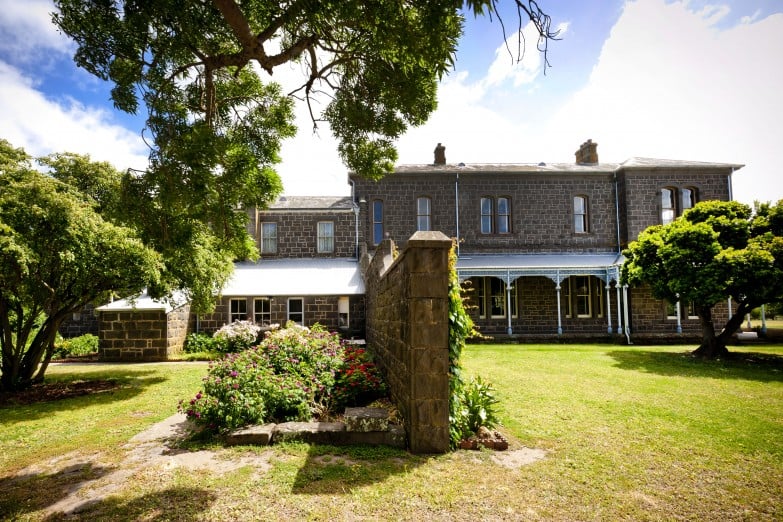