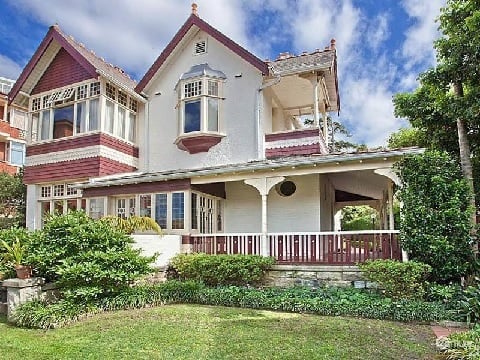 This is a story of saving, from almost certain demolition, an 1894 property, the best preserved and essentially last remaining example of the thirty three, Walter Liberty Vernon Neutral Bay Land Company properties.

Because of the slow development of the lower north shore to the east of Miller Street, these houses were the first examples of gracious homes built for the wealthy in the Neutral Bay area of North Sydney. Built along the ridges with commanding views of Sydney Harbour they have all, but for this survivor, fallen victim to developers and replaced by unremarkable and in many cases ugly, high density multistorey flats.

This property had the further challenge of being missed in a review of heritage properties in Neutral Bay in the early 1990s. Despite its high heritage value, having been missed as a heritage item, permitted a low key, but tenacious strategy by developers, and an owner, to have the property demolished and replaced by thirteen “desirable” apartments. This strategy was interrupted by a North Sydney Council (NSC) initiative to apply an IHO to the property. At this stage little publicity or disclosure was made of the heritage case, which was dropped by council after objections by the developer, and Lansdowne was almost certain to be demolished.

At this stage David Anderson alerted the Bennett Precinct Chair, Bruce Cornell of his concerns about the impending demolition and Cornell approached Cnr. Bourke. He organised a Sunday morning meeting for Cnr Bourke with residents to request a notice of motion to council to review the removal of the IHO. This was successful and NSC reversed its decision and unanimously supported attempts to block the development. Caryl Fearnley Billinghurst became aware of the case and embarked upon an invaluable review of the history of the property and its occupants.

Particularly interesting, beyond the value of the property as an example of the Neutral Bay Land Company Providence, was the discovery in the remarkable and beautiful stain glass windows in the property, of images of the balustrading pattern that currently surrounds inner Sydney harbour for which the architect and first occupant of Lansdowne, Alexander McQueen had won a completion prize in the late 1890s.

The effort to save Lansdowne was an exceptional convergence of hard work, devotion to heritage goals, generosity and powerful networks that saved a treasure from demolition.

Participants deserving recognition include:
David Anderson: In alerting the local community to the value of Lansdowne as a building worth fighting to preserve, coining the name “Save Lansdowne Group”, and having a network of contacts within the state government bureaucracy to facilitate the final successful outcome against all expectations of NSC. In particular, Dominic Kelly in the office of Environment and Heritage and of course Minister Rob Stokes who was key in signing off on the 2016 interim heritage order.

Cnr. Sarah Bourke of NSC: For raising a notice of motion before NSC, to start the process to reverse NSCs previous cancellation of an IHO protecting the property. This was very much outside her usual policy but she appreciated the value of the property to North Sydney and enthusiastically took on the role.

David O’Donnell and Pauline Adraskelas of Addison’s Lawyers: Experts in heritage law who provided pro bono in person services on two occasions and
numerous correspondence in support of the heritage case.

Clive Lucas: Expert heritage architect who provided advice and decisive public support of the case to NSC and the LEC without whose advice the case would have been unlikely to succeed.

Paul Davies: Heritage Architect for one of the adjoining owners.

Caryl Fearnley Billinghurst: Provided exceptionally detailed and extensive historical material on Lansdowne and its owners and occupants. Without this information the case would not have succeeded. Also provided access to a network of expert professional architects and heritage lawyers whose advice was invaluable to the final successful outcome.

Matthew Pearce: The legal officer for NSC who was extremely accessible and helpful in providing advice and encouragement to the “Save Lansdowne Group”.

Steve de Bello: Architect, whose powerful and professional presentations may well have been decisive in swaying the opinions of commissioners at critical LEC hearings.

Bruce Cornell: As Bennett Precinct Chair acted as an organiser and facilitator to encourage and assist those with the networks and the expert knowledge to best coordinate their efforts.

Plus local residents who spoke powerfully and with conviction in defence of the property at various LEC hearings.

“An inspiring example of tenacity! This Walter Liberty Vernon house was slated to be replaced by 13 ‘desirable’ apartments but saved by this outstanding campaign.”