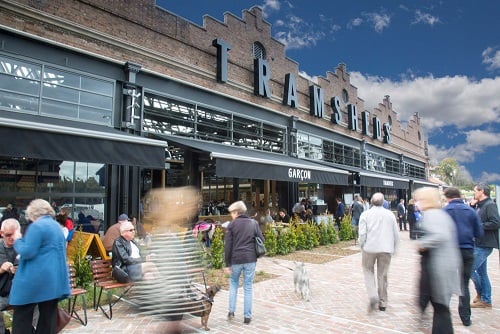 Tramsheds Harold Park is an authentic, highly considered heritage restoration project, salvaging and reinterpreting the iconic Tramway Depot to create a unique food destination - housing providores who are passionate about food, sustainability and education. Brought back to life, the building is now a much-loved destination for the local community as well as domestic and international visitors.

Standing within the Rozelle Tram Depot, first erected in 1904, Tramsheds Harold Park is a European-inspired food hall housing 11 of Sydney’s most unique and innovative food providores alongside a variety of amenities including a community centre, community garden and a flexi-space, dubbed Artisan Lane, which comes complete with an industrial sized kitchen and communal sitting area. Staying true the building’s iconic heritage, Tramsheds has been carefully restored and where this wasn’t possible, replicated, to bring many of its most significant features back to life, including its saw-tooth roof first erected in 1904. The precinct also pays homage to its more recent usage as an underground street artists venue, restoring and preserving some of the graffiti art it was latterly known for during recent years.

Upon acquiring the building and land in 2010, Mirvac discovered six original Trams owned by the City of Sydney, all of which were badly damaged by graffiti and vandals. Five have since found new owners, but the sixth tram, Tram R1 1995 was destined to stand proud in its original home, and so was transported to the Bendigo Heritage Rail Workshop in Victoria to be restored to its former glory by conservation experts, who ensured complete durability for at least another century. An item of moveable heritage, Tram R1 1995 is one of Sydney’s most historic Trams, being the last of its kind built in Sydney before the preference of buses and roads made the tram service redundant. Tram R1 1995 now sits inside a providore venue, providing a visual connection to the building’s past and allowing an immersive public dining experience for customers. Engagement with the Tram Society and original Tramway Depot workers enabled the team to delve into the tram’s historic past to create a true representation of its original features.

Research and archived imagery of the building’s history also influenced the venue’s marketing design, logo and branding brief that embraces typefaces, symbols and colour palettes from its Tram Depot history.

The original Rozelle Tram Depot comprised two heritage listed industrial structures; an adjoining office and administration building in brick with a tiled roof designed in the Federation Free Style by the NSW Government Architect – completed in two stages in 1904 and 1909. The building included significant elements such as a marshalling yard, articulated brick walls, a grid of steel columns; and the steel framed saw-tooth roof and water tower.

Process:
Acquired in 2010, Tramsheds Harold Park underwent a comprehensive Harold Park Heritage Study to establish the heritage significance of the property, identify original features and recommend appropriate policies to conserve these in any future plans to adaptively re-use the building. After four years of consultation and development of a Conservation Management Plan (appendix A) Mirvac received development approval from the City of Sydney in April 2014, with construction commencing later on in the year and completed on September 22 2016.

Overall purpose of Tramsheds:
As part of the local residential rejuvenation to higher density inner city living, Tramsheds provided a chance to create an attractive and appropriate use for the historic site – making it a viable restoration and preservation project. The newly restored European-inspired food hall houses an array of top-class food providores and is now an unprecedented food destination for locals and visitors who can experience history re-imagined. The food and dining precinct also services the local community, with a range of everyday amenities including a large supermarket, hairdressers, gym and medical centre.

Conservation Management Plan and Statement of Heritage Impact:
Prior to conservation, the Rozelle Tram Depot lay uninhabited and unused for decades, badly damaged by graffiti and vandals. The eventual collapse of the saw-tooth roof also resulted in widespread water damage to the building’s interior along with extensive rust of steelwork.

Mirvac Retail purchased the land and building with the intention of conserving and adapting the Depot into Tramsheds Harold Park. Together with a team of conservation and heritage experts, Mirvac developed a careful understanding of the authority requirement of the CMP and Burra Charter. The specialist team working with Mirvac Design included:

Taking into consideration the potential impact of the Tramsheds development, Mirvac Development worked with Graham Brooks and Associates to develop a Conservation Management Plan (CMP)(appendix A).

Research into the history of the site founded recommendations to the re-development, inspecting the existing fabric; land and surrounding gardens to determine what elements of the site could be retained. Research included a historical summary, a heritage study, City of Sydney DCP, Aboriginal and Historic Archaeological Report and an analysis of cultural significance.

A Statement of Heritage Impact was developed to outline the adaptive re-use and conservation schedule (appendix B). Outcomes to the statement arose constraints found in most historic re-developments such as ensuring original and significant components of the site be maintained and preserved, preserve all relics found and ensure a high level of environment control is taken into consideration. New additions to the buildings had to be easily distinguished whilst retaining the buildings form, presentation and setting. Demolition of the roof and parts of the walls were essential for the adaptive-reuse of the building as a community and retail hub. With the exception of the roof structure, no important features were affected by the demolition – with partial demolition considered sympathetic to the significance of the building (see appendix B: page 20). Prior to development, extensive conservation works were undertaken to ensure original fabrics were preserved.

The durability of the Tramsheds structure allowed for the majority of the existing fabric to be retained, repaired or restored. Significant components of the building structure were carefully replicated, such as the saw-tooth roof and exterior walls. The roof is supported on a grid of cast iron columns and steel beams upon which steel trusses sit. The existing columns were replaced for structural integrity with like elements, in keeping with the CMP. Colourful graffiti gathered over the years has been preserved where possible, capturing an important part of the building’s diverse history and character. Any new architectural elements are clearly expressed to ensure separation between the old and the new was evident.

The aesthetics of the new materials inserted in the existing building are an honest representation of the original industrial palette, complementing the Depot’s heritage. Burnished concrete floors, dark metallic paint and steel components complement the existing structure of brick and steel – allowing the height of the building and the tracery of the trussed roof to be a major focus.

Original stairs leading underground to the operating room of the Tram Depot can still be viewed through a glass inlay both in the entrance corridor and in some providore venues. Heritage features have also been replicated in some of the amenities such as the public bathrooms.

The overall vision of the refurbishment was to incorporate elements that reflect the modularity of the existing structure, opening the building to make it inviting and useful to the community and visitors. The perimeter has been opened onto the significant forecourt area to the south, and landscaping has been carefully interpreted to reflect the remnant tramlines. The glazed saw-tooth roof provides natural light throughout the precinct and original level shifts throughout the building offer a unique feature for some of the retailers.

City of Sydney Lord Mayor Clover Moore commented on the exceptional execution of the project stating this is “…How to do density”.

“Harold Park can now become an example of how to do sustainable development. It is absolutely brilliant, not only for Glebe and Annandale and Forest Lodge, but for the whole of Sydney.” Said Ms. Moore.

Community Involvement:
Throughout construction some elements of the building were unable to be preserved, such as some of the original graffiti. A number of the original artists were tracked down and asked to re-create pieces of their art. Graffiti that could be salvaged was preserved using a special coating to cover the toxicity of existing paints so it is safe for public viewing at the site.

Tram Depot workers who attended to the trams in the mid 1950’s provided valuable insights into the inner workings of the building, including one of the original drivers of the newly restored Tram R1 1995 that now sits proudly in one of precinct’s restaurants for the public to enjoy.

Community groups such as the Sydney Heritage Society and the Bendigo Tramway Museum were heavily involved throughout the development, providing further insight into the building’s outstanding heritage and historical growth over generations of use.

Inspiration and legacy:
Tramsheds Harold Park’s design is inspired by the food halls of Europe – with most of its internal and external structure retained and conserved including its outer brick facade. In respect for the building’s legacy, the award-winning garden that was cared for by the depot workers and once surrounded the Tramway Depot is being recreated adjacent to the site. A Harold Park History Book was created to identify and educate the community on the history of the site – this can be viewed here http://history.tramshedsharoldpark.com.au

Sustainability statement:
There were five key initiatives that formed the basis of the sustainable development at Tramsheds:

The existing cast iron columns were replaced for structural integrity with like designed elements, in keeping with the Conservation Management Plan. The original corrugated iron roof sheeting could not be retained, and new custom orb profile has been installed. In addition, former steel roof ventilators have been replaced with new ones, designed to replicate the original style.

Where possible, original architectural hardware and fittings have been retained, including original metal fire doors, which, while intact, are no longer operable.

Worked on the project:
Mirvac Retail and Mirvac Development.