Richard Windeyer (1806-1847), journalist, barrister, agriculturist and politician, was born on 10 August 1806 in London, the eldest child of parliamentary reporter for 'The Times', Charles Windeyer and his wife Ann Mary, nee Rudd. 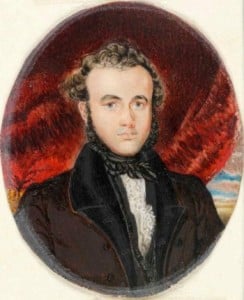 He remained in England when in 1828 his parents with the rest of their family migrated to New South Wales. He was admitted as a student in the Middle Temple, London in March 1829 and called to the Bar on 23 May 1834. In the meantime, as a journalist and parliamentary reporter like his father, he was connected with The Times, The Morning Chronicle, The Sun and The Mirror of Parliament, and in 1834 was London correspondent for the Australian, using the initials ‘W.R.’. He assisted Dodd in compiling the Parliamentary Pocket Companion, and was associated with Colonel Perronet Thompson in the early anti-Corn Law movement.

On 26 April 1832 he married Maria Camfield. Their only child, William Charles, was born on 29 September 1834. Although he always intended to follow his parents and their family to Sydney, Windeyer’s departure from England was hastened by a letter from his father, saying that ‘Dr Robert Wardell’s death and Wentworth’s expected departure and the division of the Bar makes the moment particularly favourable for your debut’. He set out with his wife and infant son arriving at Sydney on 28 November 1835.

Windeyer soon gained a considerable legal practice and became a leader of the bar. In July 1846 Windeyer and Robert Lowe appeared for the defendant in Attorney-General v. Brown, concerning the right of the Crown to grant the Australian Agricultural Company (the AA Co.) the sole right to mine coal near Newcastle. The arguments for the defendants failed, but enabled Windeyer to array much legal and historical learning in support of the political view that the lands of the colony should be in the control of the colonists, not in the grant of the Crown.

Windeyer’s legal work was a small part of his activities in the colony. In February 1838 he bought his first land at Tomago in the Hunter Valley, not far from his father’s farm at Tillegrah on the Williams River. By 1842 he held about 30,000 acres (12,141 ha). Vast sums of money were spent, especially on draining extensive swamp lands in the vicinity of Graham’s Town, building a homestead at Tomago and on other improvements, but with little return.

He planted thirty acres (12 ha) of vines, imported a German vine-dresser from Adelaide, made his first wine in 1845 and received permission to import seven vine-dressers and one wine-cooper from Europe (Windeyer, 1967, edited, Stuart Read, 28/12/08)). The vineyard was established with plantings from James King of Irrawang, who was known to be producing good wines by 1840. Windeyer was one of the first successful vignerons on the Hunter.

At Tomago Windeyer ran cattle, horses and pigs, tried growing sugar-cane and wheat, and in 1846 with Reynolds, president of the local agricultural society, he imported the colony’s first reaping machine from South Australia. Despite all his expensive improvements and mechanized farming the one prize he won was for pumpkins. However, after his death wine from Tomago won a certificate of merit at Paris in 1855.

Progress on Tomago House was slow, hampered by the 1840s depression. It seems likely that the house was fit for habitation by 1847. The house formed the nucleus of what was, in the mid 19th century, a vast agricultural estate and the country residence of one of the nation’s leading politico-legal figures.