The Kangaroo Island community was devastated by bushfires in January 2020. On the third of January the Stokes Bay Community Hall was engulfed and destroyed in the bushfire that raged across Kangaroo Island on that terrible night.

The Kangaroo Island community was devastated by bushfires in January 2020. On the third of January the Stokes Bay Community Hall was engulfed and destroyed in the bushfire that raged across Kangaroo Island on that terrible night.Stokes Bay Community Hall began as an education site when the old Cassini school building was moved to its position on Stokes Bay Road in December 1952. It served the farming community as a school until 1958 at which time the students transferred to Parndana School. The community then purchased the school and the grounds and in order to serve the growing community, the larger hall was built adjacent to the school building. It was completed in 1960 with much of the building work done by the local farmers. Tennis courts were constructed and the Hall became a focal point for the community as a venue for tennis, table tennis, church services and for community functions such as the Christmas pantomime and annual Fireworks event.

The Stokes Bay Community Hall committee over many years began a program of renovation and renewal. This involved installing a new kitchen in the school building, the construction of a veranda around the school building and the connection of the two buildings along with improvement of all the amenities including the installation of air conditioning. The official opening of the renewed buildings with all work completed was at the annual Fireworks night in November 2019.

The fire destroyed the school building, all of the renovations and part of the main hall. Although the task of rebuilding is huge and will cost many hundreds of thousands of dollars, the resilient Stokes Bay community is determined that once again there will be a Stokes Bay Community Hall where the community will celebrate, participate and congregate as they have over the past 60 years. 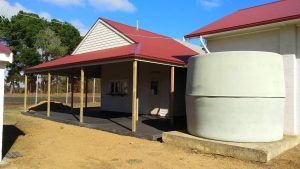 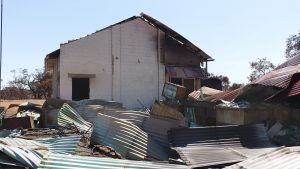 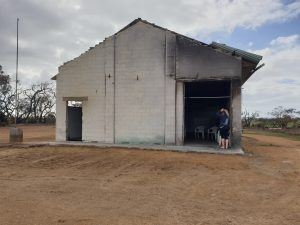