Donate to support the National Trust's ongoing conservation of Strawberry Hill at Barmup.

Long before European colonisation, Barmup was a meeting place for Menang Aboriginal people. In 1826 a government farm was established near the water course which fed the fledgling settlement. It was later purchased by the Government Resident Sir Richard Spencer and in the 1890s by Francis and Maude Bird.

A Government Farm was established at Strawberry Hill / Barmup in 1827 as part of the first European settlement at King George Sound. In 1833, Sir Richard Spencer was appointed Government Resident at Albany. He purchased the Government Farm and resided there with his wife Ann, seven sons and three daughters in the existing small pise cottage. Additional rooms were quickly added and within three years the two-storey granite house that still stands was constructed. The earlier single-storey structures were destroyed by fire on Easter Sunday of 1870, and scorch marks can still be seen up high on the granite house.

After a period of neglect it was purchased in 1889 by Francis and Augusta Maude Bird who restored the house and farmed the land. In 1956 the property was purchased by the government as a historic monument but fell into another cycle of neglect. Transferred to the National Trust in 1964, the property is being conserved to appropriately reflect its significance.

The award-winning Visitor Hub was created to allow the National Trust to enhance facilities for volunteers and visitors, because the existing buildings could not be made accessible without negatively impacting on heritage values.

The kitchen block of the Main House at Strawberry Hill/ Barmup was constructed c1835 and the two storey granite building in 1836. The link between them was completed in 1889. Built on the southern slope of a granite outcrop, the building suffers from water ingress – water finds its way into the building. This water causes humid conditions inside the building that are damaging its fabric – particularly the collection of historic objects.

Future conservation will address damp remediation in Main House, and render repairs to the 1835 cottage.

How you can help

All donations over $2 are tax-deductible.

Thank you in advance for your generosity and support. 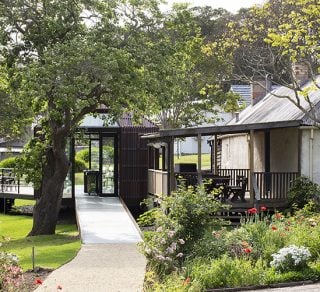 Come and explore the award-winning Visitor Hub and reconnect with the unique story of this Strawberry Hill at Barmup.
END_OF_DOCUMENT_TOKEN_TO_BE_REPLACED
Menu