A message from the President, Trevor Horman. 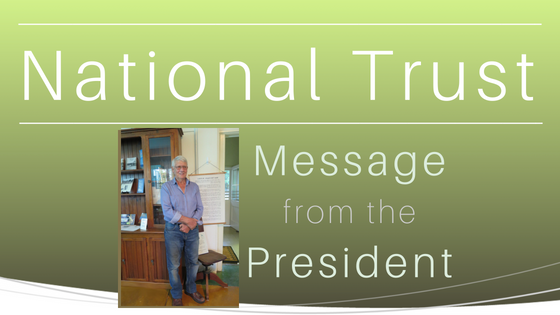 It was educational to watch a professional who had been used to felling 100 trees a day down near Bombala in his father’s logging business.

First, he sharpened the chain (a skill that eludes me). Then he donned all the appropriate safety gear.

He spent some time sizing up the trees and working out the best way to fell them in the desired position. He then scarfed (a wedge-shaped cut made in a tree before felling, to determine the direction of the fall) the side where the tree was to fall before placing a cut in the backside.

The Komatsu excavator was then used to push the tree (at the height of the roof of the house) and bingo the tree fell exactly where Shaun planned it.

These trees were at least 15m high and they reach a fair way across the garden at Audit House.

Shaun cut the trunk into manageable sections before felling the next tree. I was impressed that the seven trees landed on top of each other. Just for info, Shaun towed the excavator in from Humpty Doo to do this job for the Trust. He arrived about 2:30 PM and departed at about 5:00 PM.

considering loading and unloading time plus travel time, he probably gave us about 6 hours of his time.

It’s a relief that this threat to Audit House and Tim’s office has been removed.

These large trees almost fell during Cyclone Marcus earlier in the year (16 March 2018) and would have made a helluva big dent in the house if they had fallen.

We now have the challenge of removing the lighter parts of the foliage before the leaves drop off which, should be started straight away.