A quick report on an overnight trip that Tim Dixon and I made to Pine Creek and Katherine on 9th and 10th May 2018. 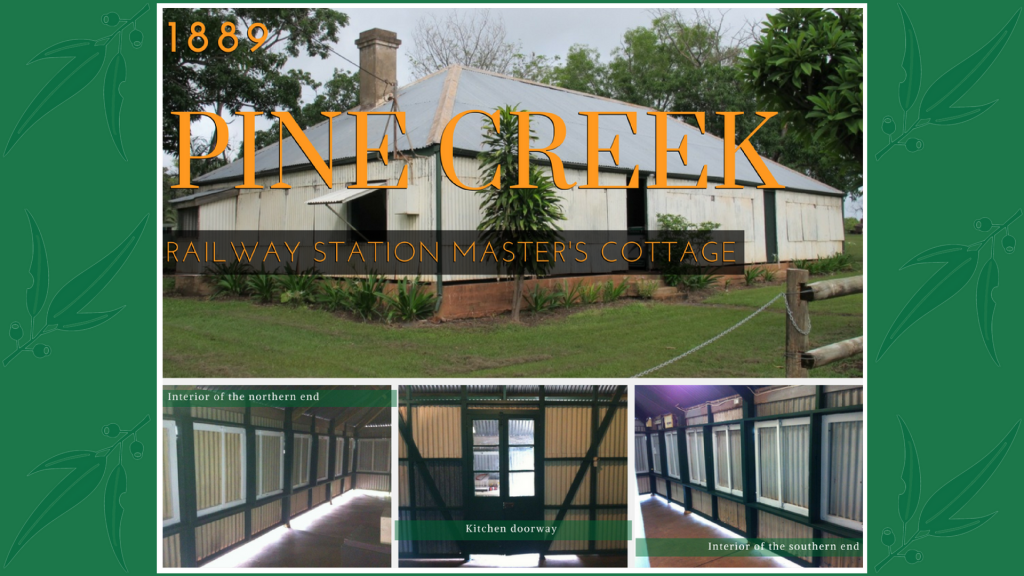 After a 7:00 AM start, we first visited Pine Creek Repeater Station where we were met by our Museum attendant, Kevin “Bunji” Shaw.  Bunji proudly showed us the extensive displays in the Museum. He also showed us the remedial works that had been performed on the building and what was left to do. We noted the water pipe leaking and the water meter ticking over. Fortuitously “Skins” the plumber our next door neighbour came by and offered to assist. We noted enhancements to display cases and interpretive signage that is required.

We then visited the Rail Heritage precinct where we were met by attendant Bazza Burrowes. We noted the large gum tree that Bazza has removed and various works that are required to the station, the Parcel Shed, the Goods shed and the Railway Employees residence. We inspected the remnants of the 1889 weighbridge which we hope to restore. We also inspected the derelict toilet block and the options for fencing the key elements of the precinct. Unfortunately, antisocial behaviour is an ongoing issue with this property at night.  The Gun Alley Gold Processing display assembled by Earl Gano will be incorporated in our plans. We also visited Miners Park and saw the refreshed signs arranged by Gaye Lawrence through the Australian Institute of Mining and Metallurgy.

In  Katherine, we visited the 1926 Railway Station and viewed the works that are proposed to relocate steam locomotive NFB88 to the station compound. We noted that the new cenotaph grounds extend across the railway lines.

At mid-afternoon, we met with Katherine Mayor Fay Miller. Fay gave us a great rundown on the Katherine Masterplan and is an excellent spruiker for the town and region.  Luckily, Tim already knows Fay from his previous work.  We were given a very impressive document entitled, “8 Great Projects in Katherine” for the region.  I would encourage anyone interested to contact the Katherine Town Council.   Luckily, our plans to relocate the steam locomotive to the Katherine Railway Station fits in with the council’s plans to revitalise the “Railway Terrace Linear Parklands.”

At 4:00 PM we visited O’Keefe House where we were met by Merriel Lawrie, Stephanie Hill and Elizabeth Hart from the Trust. We had broad ranging discussions over tea and scones in the very pleasant gardens. We met caretaker Natalie.   We are always on the lookout for more attendants to open Trust properties in Katherine.

At 8:00 AM on Thursday we met with the council officer at Katherine Town Council regarding the specifics of the relocation of the steam locomotive. He did not see any problems.  Leasing additional land to the Trust for the locomotive seemed to be OK.  He told us about plans to beautify the 1926 railway bridge including a café.

At 9:00 AM we met with Jo Sangster the CEO of Vic-Daly Shire Council.  Again, Tim knew Jo from his previous work.  Jo was welcoming and interested to hear about the matters we raised re Pine Creek and Timber Creek. She emphasized the primacy of the Local Authorities and strongly recommended engagement with them.

At 10:00 AM, we visited Simmone Croft at Katherine’s Outback Heritage Museum. Simmone is a great ally and shares problems such as attracting volunteer attendants. Toni Tapp-Coutts  (KTC Councillor) joined us and gave us “Jesus Loves Nachos” bumper stickers.

Whilst in the vicinity we checked out the 1899 Overland Telegraph pylon on the southern bank of the River.

We then returned to the 1926 Railway station where Merriel kindly opened up and we could see the current utilisation and displays. We then headed back to Pine Creek to take some measurements and take late lunch at Maysies. We visited the Council Office and spoke with the lady who is normally the Librarian. Then back to the railway where Tim was able to inspect the inside of the Railway Employees house and the inside of the Goods Shed. Bazza was still on duty.

We spoke with Gaye Lawrence (Vic-Daly Councillor) on local issues including Pussy-cat flat and the Gold Rush Festival on 1-2 June.  Gaye asked if the art show could be held in the railway employees house again.

And whilst we saw lots of burning off we noted that the site of #2 Depot on the OT (97 miles from Darwin) has not burned yet. We hope to organise an expedition to the depot later in the year and search for the Nienaber’s grave.

At Adelaide River, we dropped in to say hello and have a cup of tea with Myrlene and Gordon Wilkinson at the Rail Heritage Precinct.

As with all such trips, there is a lot of follow-up work to do.  But the benefit of face to face meetings with all the people that we met was invaluable. I am sure that Tim now has a better appreciation of our properties in Pine Creek and Katherine and the dynamics that we all work with.