The National Trust of Western Australia warmly welcomes Anna Laverty as the 2022 Prelude composer in residence at Gallop House.

The residency is part of a program run by the Peggy Glanville-Hicks Composers House Trust at three heritage buildings across Australia.

Anna, a graduate of Edith Cowan University’s Western Australian Academy of Performing Arts, is an award-winning producer with an impressive catalogue of releases across multiple genres. Her early career in London saw her working with the likes of Florence and The Machine, Bloc Party, Depeche Mode and Pete Doherty.

Since bringing her talents and experience back to Australia Anna has been in high demand and has recently produced albums by Camp Cope, Stella Donnelly, Pinch Points, Screamfeeder and a live album for Courtney Barnett at the Royal Exhibition Buildings.

Anna’s impressive body of work and reputation saw her picked out to feature on the successful 2019 ABC television series ‘The Recording Studio’ as a featured engineer. The program brought everyday Australians into the studio to write and record a song. The inspired repertoire and calibre of production saw the show win the 2019 ARIA Award for Best Original Production. Anna Laverty also received the Australia Council for the Arts Music Fellowship for 2021/22.

Now the Prelude Composer in Residence at the National Trust’s Gallop House for 2022, Anna has an extensive program of co-writing planned while in residence.

Gallop House is a two-storey Victorian-style home built in 1877. Built on the banks of the Swan River (Derbarl Yerrigan) in an area known to the Whadjuk Noongars as Nanulgarup, the area was originally known as Dalkeith Farm. Adam Armstrong and his sons took up the land in 1831 and established a five acre garden growing grapes, figs and a variety of vegetables as well as fencing 35 acres, probably for livestock. It was later leased than bought by James Gallop who built the current house and extended the range of crops which he sold from a jetty at the base of the steps, now reclaimed land.

Over time the place has been saved from destruction firstly by the government and later by the Royal Western Australian Historical Society. Leslie and Bill Anderson lived there through the 1960 and 70s doing much to restore the house and opening it to the public. The National Trust took over Gallop House in 2009 and with the generous support of the Feilman Foundation has been able to conserve and redevelop the house and adjacent land for use for the Prelude composer in residence program.

Prelude is based on the sentiment expressed by Peggy Glanville-Hicks in 1958 that, “It is apparent that leisure and silence are absolute prerequisites for composers if they are to engage fully the many forms of awareness involved in creative activity.” The successful applicants are provided with sole occupancy of the houses as well as a stipend to cover living costs and travel.

Prelude is in its sixth year and is open to Australian composers in all musical genres and practices, including world music, jazz, new classical/art music, pop, film and rock. Residencies can be for research and development or for the creation of new work or as a time for reflection and renewal.

In 2022 three Australian composers will take up Prelude residencies: Brenda Gifford (NSW), Anne Cawrse (SA), Anna Laverty (WA). The Prelude program ensures these three strong and exciting female composers who will be provided with a year’s haven to further develop their professional practice. 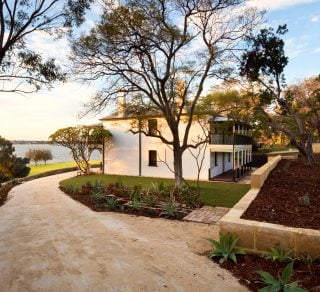