The 1873 Chief Secretary’s Building on the corner of Bridge and Macquarie Streets Sydney has now ceased to have a state government function after being continuously used by government for 140 years, since its construction. Listed on the National Trust Register in 1970, this building may be subject to disposal by the government and its magnificent indoor spaces, artworks and collection of international decorative arts may now be under threat.

“In a masterly way that respects absolutely the heritage significance of the building, the Government Architect’s Branch in 2006 completed renovations of the building that have resulted in a state-of-the-art office environment being inserted seamlessly into the skin and onto the skeleton of Barnet’s sumptuous creation. In doing so, internal finishes and external fabric have been painstakingly repaired and restored by craftspeople who have matched the expertise of their masterly counterparts in the 19th century. This is an exemplar for those who wish to find new or continuing uses for heritage buildings.”

“The Chief Secretary’s Building commands an elevated position on Bridge Street, Sydney, opposite the entrance to Government House and a short distance from Parliament House in Macquarie Street. Like the design of its impressive architecture, its prominent location was selected to reflect the status

of its original occupant, the Colonial Secretary, who, after the Governor and Chief Magistrate, held the most senior position in the colony of New South Wales.

The architecture, decoration and furnishing of the Chief Secretary’s Building (known as the Colonial Secretary’s Building until 1959) were a collaborative effort between colonial architect James Barnet and political supremo Sir Henry Parkes. An important example of late 19th-century architecture, the building and its artworks, which include grand statuary, allegorical figures and international decorative arts, are a fitting metaphor for the aspirations of the colonial government.

For over 120 years, the building has been the administrative headquarters of an expanding government bureaucracy with wide-ranging portfolio interests, from social welfare and justice to public works and railways. The growth and diversification of these activities has also reflected the enormous social change in New South Wales.

Recognised as a significant heritage landmark in the landscape of Sydney, the Chief Secretary’s Building has undergone a major refurbishment to ensure that its role in state administration will continue well beyond the 21st century. Its occupants, including the Office of the Governor of NSW and the Industrial Relations Commission of NSW, will uphold this fine tradition in public service for the people of New South Wales and add their mark to the building’s evolving history.”

For the foyers of the Chief Secretary’s Building, Sir Henry Parkes commissioned Italian-born sculptor Giovanni Fontana to create “three statues in marble representing Her Majesty Queen Victoria, His Royal Highness the Prince of Wales and an emblematical statue called New South Wales… to be six feet six inches in height and …of the best Carrara statuary marble”. Fontana, who had travelled to Sydney in 1879 to exhibit work in the International Exhibition, executed the sketches, full-size plaster models and carved figures back at his Chelsea studio in London before completing their final details in Florence. The three statues arrived in Sydney and were placed in position on 21 April 1884.

When Sydney played host to the International Exhibition in 1879, the Chief Secretary’s Building was in its final stages of construction. Although nothing came of an early suggestion to use the building as an adjunct venue, it became one of the most important repositories for artworks acquired from some of the leading international artists and craftspeople who exhibited at the exhibition.

The International Exhibition provided Sir Henry Parkes with a perfect opportunity to indulge his passion for art, both as a private connoisseur and a public collector. As the displays were dispersed, he directed items to the newly established Art Gallery and Technological Museum, and to his newly completed offices in the Chief Secretary’s Building. It was noted that he had “patronised the arts and collected vicariously at Government expense… to surround himself with the trappings befitting his station as a distinguished identity of the colony”. 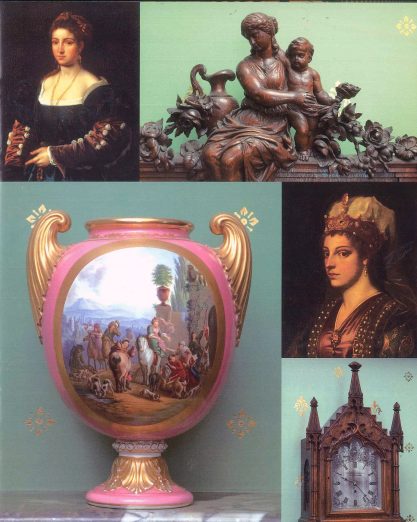